As industries develop and change, they go through phases of a lifecycle. In this lesson, we'll discuss what it means when industries become mature markets and provide some examples of these industries. Updated: 05/17/2021
Create an account

New products and services are developed by companies every day, but occasionally, a whole new market is born. Think of the auto industry in the early 1900s, or the computer industry in the 1980s. Every industry you can think of, at some point in history, was a new market.

Just like individual products, these markets go through a lifecycle. Depending on the nature of products and the market, they go through the stages of these lifecycles at different speeds, but they go through each stage. These stages are startup, growth, maturity, and decline. For this lesson, let's focus on the maturity stage. 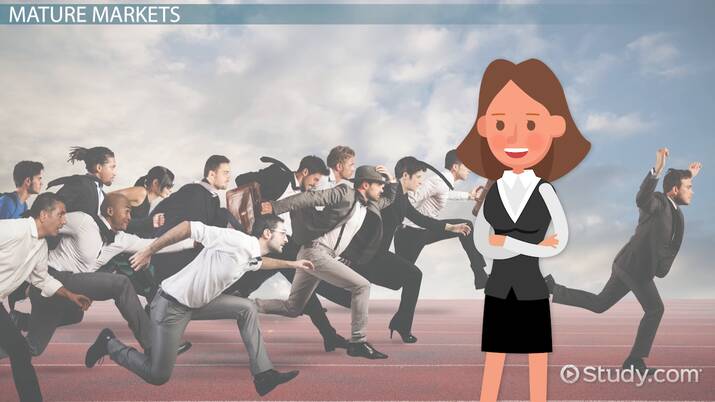 Before a market reaches maturity, it goes through the growth stage. During the growth stage, new companies are coming into the market, demand by consumers is increasing, and profits are growing. Supply and demand is in the producer's favor. But, eventually, the market begins to saturate and supply and demand softens. Perhaps new products have been innovated or maybe most of the new customers to find have been found. As growth slows, the market reaches maturity.

A mature market is the stage where the rate of growth slows, perhaps to zero. Because there is little growth, companies in the industry end up with excess inventory and/or capacity. This can often lead to pressure on profits, as companies discount prices to get rid of their excess capacity. Whether those price drops lead to a price war or companies shutting their doors, competition increases and becomes very intense. Competition in mature markets is typically based on price, not on product differentiation.

Often, the next strategic mistake made by companies is to assume whatever advantage helped them succeed in the growth phase will help them maintain market share in the mature phase. Again, this is usually not the case. If their competitive advantage was being a low-cost leader, then as other firms lower their prices, they lose their edge. If a firm pursued a luxury strategy, then as consumers focus on lower cost, less differentiated products, that firm loses. It's critical, when operating in a mature market, to recognize what consumers want and offer exactly that with minor variation.

There are plenty of markets in our economy that are mature. Companies can be, and are, very profitable in a mature market if they select and execute the right strategy. Think of automotive companies, grocery chains, oil companies, and clothing stores. All operate in mature industries, but many are very successful and very profitable.

All right, let's take a moment to review. A mature market is one that has reached the third phase of the four-phase industry lifecycle, which is the stage where the rate of growth slows, perhaps to zero. A market reaches maturity when sales continue to grow, but at a declining rate. Specifically, in a mature market, companies have excess inventory or capacity, products become more homogenized (less differentiated), and there is pressure on prices and profits.

Companies that operate in a mature market must recognize the transition and adjust their strategy if they want to be successful. Assuming the competitive advantage that carried them through the growth stage will continue to help them may be a mistake. So is sacrificing market share for short-term profits, since gaining market share in a mature market is very difficult.

Many markets in today's economy are mature markets and companies can still be very successful. However, to do so, they must recognize the threats and opportunities that come with a mature market and adjust their strategy to protect themselves and take advantage of their new environment.

What Is a Market Reference Point? - Definition & Examples

What Is a Mentor in Business? - Definition & Concept

What is Growth Strategy? - Definition & Examples