'DArn Man, I AM Deeply Pained, But Pretty Soon I'll Possess An MD And Party!'

Ok, I'm sure you are totally wondering where the above you're looking at came from. No, it wasn't a pasting error, although I could see why you might think that. It's actually a mnemonic device, which is a sentence constructed to remember something difficult, like all the many branches of the maxillary artery!

Each capitalized letter refers to a different artery and each artery name begins with its associated capitalized letter. You also might notice that 'AndParty' isn't spaced. That's not a grammatical error either but rather because both A and P refer to the same artery. Alright, we'll come back to all of this in a moment but, first, lets review some basics about the maxillary artery.

The maxillary artery, also known as the internal maxillary artery, is one of two terminal (end) branches of the external carotid artery in our neck. The maxillary artery gets its name from the fact that it stems off and then runs inside the mandible bone (lower jaw) and then up onto the maxilla (upper jaw), hence 'maxillary' artery. It's an artery that has a lot of little vessels that branch off of it, 17 to be exact', so this is where that handy little mnemonic comes in! 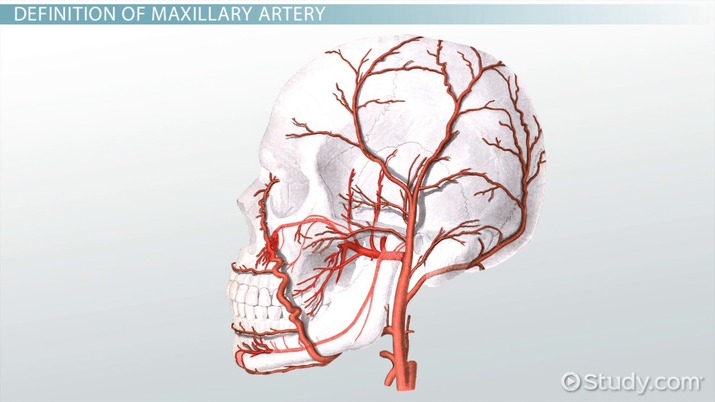 Branches of the Maxillary Artery

Ok, so now that the bizarre opening to this lesson finally makes some sense, lets see how we can use it to remember all 17 branches.

The maxillary artery is, for ease of identification, broken into three sections that are named portions 1, 2, and 3 (I know, you're impressed with the creativity of their names).

The first portion of the maxillary artery has 5 branches thus, the first 5 capitalized letters of our mnemonic apply here: DArn Man, I A.

The second portion has 6 vessels stemming off of it; therefore, the next 6 capitalized letters of our mnemonic apply here: M Deeply Pained, But Pretty Soon.

The third and final portion also has 6 branches, and so the final 6 capitalized letters of our mnemonic apply here: I'll Possess An MD AndParty!

The maxillary artery, also known as the internal maxillary artery, is one of two terminal (end) branches of the external carotid artery in our neck. It has 17 branches, broken into three sections (portion 1,2, and 3), which supply an array of muscles, structures, and passageways in and around the face and ear. The mnemonic 'DArn Man, I AM Deeply Pained, But Pretty Soon I'll Possess An MD And Party!' can be helpful in remembering all 17 branches and is divided as follows: