View bio
Sen. Joseph McCarthy's post-World War II campaign to expose communists in America, dubbed McCarthyism, sparked a general public fear called the Red Scare. Learn more about McCarthyism and the Red Scare, including the causes and effects of it, and the rise and fall of McCarthy and McCarthyism. Updated: 09/16/2021
Create an account

Defining McCarthyism and the Red Scare

The Red Scare, which gained notoriety during the First World War, represented the widespread concern that Americans had developed over the fear of communist (or anarchist, during the First World War era) subversion within society. Americans believed, especially during the Cold War, which was a period of tension between the United States and Soviet Union, that communism was attempting to infiltrate every aspect of their lives. While this is not necessarily the best analogy, you can relate the widespread fear of communism during the Cold War as being similar to the heightened alert Americans had toward terrorism and suspected terrorists during the beginning of the modern century.

Instigating this fear was Joseph McCarthy. McCarthy was a Republican senator from Wisconsin and was the leader behind the ethos of McCarthyism. The term was created in 1950 by Washington Post writer Herbert Block. Simply put, McCarthyism was the practice of attempting to minimize the threat of communism by accusing and detaining suspects deemed to be a security threat or disloyal to the United States. Investigations ranged from the federal government (especially the State Department), to Hollywood, to the general American public.

No one was safe because McCarthy was the judge, jury and executioner. McCarthy's vitriolic campaign of identifying and eliminating suspected communists raged from roughly 1950 to 1954. This was a rude awakening to Americans who thought the trials and tribulations of the Cold War rested outside of the United States borders. 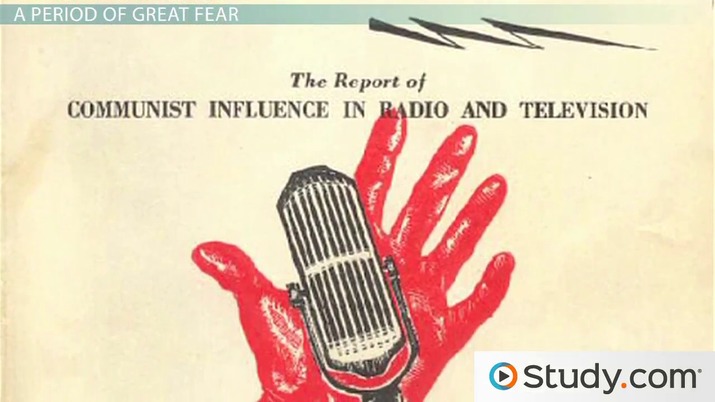 Coming up next: The Cold War in America: Effects on Everyday Life

A Period of Great Fear

With the onset of the Cold War following the Potsdam Conference in 1945, Americans were made to believe that communists were figuratively lurking around the corner. This fear of the 'red menace,' or communism, spurred a great reorganization in federal policy both internationally and domestically.

The Truman Doctrine, created by President Harry Truman, established the basis for protecting the nation from communist subversion. As a result, anti-communist groups such as the House Un-American Activities Committee, or HUAC, rose to prominence. However, Senator McCarthy took the battle against communism further than ever imagined.

Beginning in 1950, McCarthy targeted individuals within the United States who were suspected communists. His witch hunt began at the federal level. He accused individuals, such as General George Marshall, who served both as Secretary of State and Secretary of Defense under Truman, and Secretary of State Dean Acheson of supporting communism. McCarthy targeted the United States Army and, eventually, President Truman himself when he made the decision to remove General Douglas MacArthur from power during the Korean War.

McCarthy's search eventually trickled down to the ground level as he began attacking artists, musicians, writers and movie stars. Names you might recognize include individuals such as Charlie Chaplin, Langston Hughes, Pete Seeger, J. Robert Oppenheimer and Albert Einstein. McCarthy contended that all of these individuals worked within communist organizations and/or belonged to the Communist Party of America. Additionally, McCarthy's wanton accusations often led to those who were not famous and worked in the private sector being ostracized from their respective profession.

As reckless as McCarthy's anti-communism campaign was, he enjoyed support from a select group of powerful individuals. Most conservative members of Congress backed McCarthy's tireless search. Why? The simple answer is because a good portion of McCarthy's campaign attacked liberals and members of the Democratic Party. Supporting McCarthy helped conservatives gain notoriety and votes during national elections.

McCarthy also had the support of the Roman Catholic Church due to its anti-communist stance. It also helped that John F. Kennedy, a prominent Catholic, future President of the United States and quite possibly the only Democrat to do so, supported McCarthy. All of this powerful political backing helped McCarthy escape federal libel and defamation suits.

The Downfall of McCarthyism

McCarthy's aggressive campaign of routing out suspected communists eventually ran out of fuel. Two major hearings brought about the downfall of McCarthyism: the Army-McCarthy Hearings and McCarthy's censure, both in 1954.

The Army-McCarthy hearings began when the Army formally accused McCarthy of providing preferential treatment to one of his former aides who had become a serviceman. McCarthy countered by accusing the Army of attempting to terminate his investigations into the service through coercion. Notwithstanding McCarthy's allegations, the Army, in April 1954, brought a federal suit against McCarthy.

The trial lasted until June, when McCarthy was acquitted on all charges. McCarthy, however, received a significant amount of negative spotlight during the trials, especially from powerful national journalist Edward R. Murrow. This ultimately led to McCarthy's political downfall by the end of 1954.

In June 1954, a small committee, known as the 'Watkins Committee,' led by Senator Arthur Watkins, issued a proclamation for the censure of Senator McCarthy. Congressional hearings subsequently began in August. Over a period of several weeks, members of the Watkins Committee deliberated on McCarthy's fate. By October, the committee had moved to charge McCarthy with congressional contempt and defamation of members of the Senate. In December, the United States Senate voted in favor of McCarthy's censure 67 to 22. Senator McCarthy was ostracized from the Senate, and McCarthyism became taboo.

Beginning in 1950, Senator Joseph McCarthy launched a campaign, which came to be known as McCarthyism, to identify and eliminate suspected communists in America. Propagating the Red Scare, the fear of communist subversion, McCarthy charged individuals in the federal government, Hollywood and general public as being supporters of communism. He enjoyed some support during his mission, but the Army-McCarthy hearings and the Watkins Committee ultimately ruined McCarthy's political clout. In December 1954, the embattled McCarthy was censured by the United States Senate.

When you have completed the lesson, you should recognize the effects of the Red Scare of the 1950s, and the witch hunt of Joseph McCarthy, on America.

Imagine you are living in the United States during the early 1950s. You are in your late teenage years, and one of you friend's parents just lost their job because someone accused them of being a communist. Write a 2-3 paragraph letter to your local newspaper outlining your fears of McCarthyism. You will want to touch on recent, well-known events including accusations made against film stars, musicians, and politicians. Relate the fears you have about the witch hunt, not only for you, but for the nation and its citizens' civil liberties. Remember, too, that you do not want to be associated with communism, so you will want to uphold American ideals while warning your neighbors of McCarthy's abuses.

In your own words, write a five-paragraph synopsis of the Red Scare. You should start by looking at its origins during World War I and conclude with the downfall of McCarthy. Remember that you are writing for someone who knows nothing about the Red Scare of Joseph McCarthy, so you will want to be clear and thorough in your narrative of events. What are the key events that you think someone should know about the Red Scare and its effects from World War I to 1954? You will want to begin with an introductory paragraph that states a clear thesis, or argument. Then examine the thesis throughout the essay. Your thesis does not have to be complicated. It could be something like The Red Scare was a time of paranoia in the United States that showcased Americans' fear of communism. The next three paragraphs prove your thesis. A concluding paragraph should restate the thesis and briefly summarize your findings.

The Red Scare of the 1920s: Definition, Summary & Causes

1968: The Year that Changed the Nation

The Tet Offensive: The First Major Offensive from North Vietnam