The term 'pneumatic' is utilized in three main contexts through 'Brave New World'. Identify how it can be used to describe women, objects, and even describe people as things in a dehumanizing way. Updated: 12/14/2021
Create an account

In Brave New World by Aldous Huxley, the word 'pneumatic' is used to describe girls, furniture, and shoes. In this lesson, we will take a look at the multiple meanings of this word and apply it to the context of the novel.

From a literal sense, the word pneumatic means filled with air. Pneumatic tools contain air that remain at intense pressure, so that when the valve is opened, the force of air that is released powers the machine. When the valve is released, the compressed air forces the chair to move up or down. Another definition of pneumatic has to do with the spiritual realm. Pneuma is a Greek word for spirit that is often used interchangeably with the Holy Spirit in Christianity. Finally, it can be used to describe a curvy woman. Throughout the novel, the word is used in ways that somewhat plays with blending the three definitions. 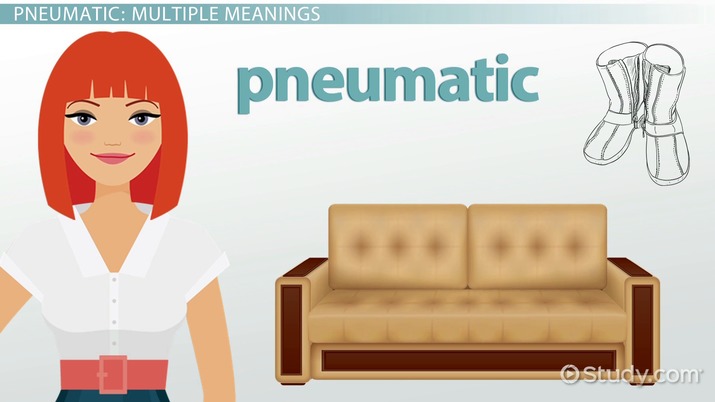 Coming up next: Science as a Means of Control in Brave New World

Pneumatic is used in a most flattering way to describe Lenina Crowne. When Lenina's frequent partner, Henry Foster, describes her to the Assistant Predestinator, it is intended to be a compliment. 'Oh, she's a splendid girl. Wonderfully pneumatic. I'm surprised you haven't had her.' Other girls are compared to Lenina as being wonderful people, but less pneumatic than Lenina. Typically pneumatic is a good thing, but evidently, you can have too much of a good thing. 'Clara…was really too pneumatic. Whereas Fifi and Joanna were absolutely right. Plump, blonde, not too large.' Most likely, in reference to these girls, pneumatic is referring to their breast size, but there may be a little cross-over into Lenina's spirited personality.

In addition to people, pneumatic is used to describe things. 'When they… were comfortably stretched out on the pneumatic sofas in Bernard's room…' At the movies, they also sit in pneumatic furniture. 'Sitting in a pneumatic chair, with his arm round a girl's waist, sucking away at his sex- hormone chewing-gum and looking at the feelies.' In this context, it appears that the pneumatic chair is made for sexual stimulation. But then, it is used to describe shoes. 'Noiseless on his pneumatic shoes, the man came up behind him.' Are you picturing athletic shoes? Remember this book was written in 1932, and Nike didn't open until the 1960s. In these examples, it seems like the items may be big, soft, and bouncy.

The two definitions collide in a conversation between Lenina and Bernard. 'Every one says I'm awfully pneumatic,' said Lenina reflectively, patting her own legs. 'Awfully.' But there was an expression of pain in Bernard's eyes. 'Like meat,' he was thinking.' Bernard is troubled by his feelings for Lenina as she is described by others and herself as nothing more than an object to be used or consumed.

Pneumatic is a word that is used out of context by the author to describe girls, furniture, and shoes. Pneumatic can mean full of air, which could be related to things that are big, soft, and bouncy like shoes, chairs, and girls' breasts. It can also mean spiritual, which could be a compliment to Lenina's personality. Only Bernard recognizes that there is more to Lenina than an object to be consumed.