The measure of an arc can be solved by determining the degree of the angle that intercepts an arc. Learn about the process of measuring an arc, major vs. minor arcs, and real-world practice arc problems. Updated: 09/28/2021
Create an account

What Is an Arc?

And then there's 'arc' with a 'c.' This is the arc of circles. 'Circle' begins with 'c,' so that makes sense. An arc, in terms of a circle, is a part of a circle's circumference, or edge. If you prefer your circles in pie form, then an arc is the flaky crust keeping in that delicious pumpkin filling on your slice. I know I like my vegetables in pie form, and I love me some pumpkin pie. 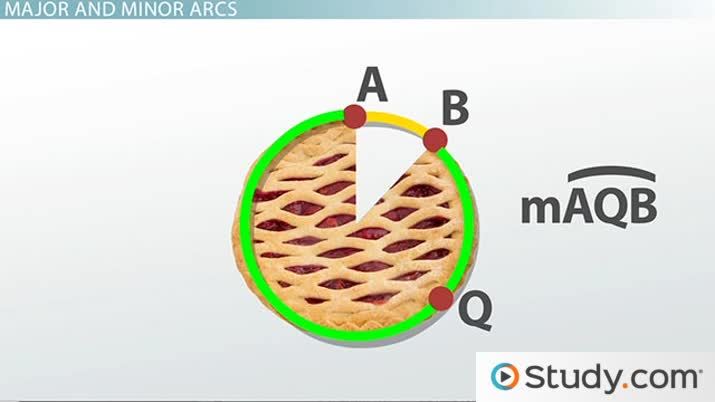 Coming up next: How to Find the Measure of an Inscribed Angle

If you're like me, then when you cut a slice of pie, you have to stop and think about the two arcs you just created. Your knife makes two points on the circle. Let's call them A and B. If we focus on the normal slice, we call that the minor arc, or the shorter arc joining two points on a circle's edge. That's arc AB.

And then there's the major arc, or the longer arc joining two points on a circle's edge. You could think of this in terms of major and minor leagues in baseball. Major leagues are the big time, so major arc is the bigger one.

But wait. Do we also call that arc AB? We can. But that could mean the major or minor arc. So sometimes we just say major arc AB. Or we add a point like this. Then the major arc is arc AQB. As for the pie, you could totally take that gigantic major arc slice. But you resist, right?

Measure of an Arc

Notice that I said it's the degree measurement. That's important. And it's different than an arc's length, which is the distance along the circumference of the arc. Look at our comparable pie and tart slices. The length of the arc on the pie slice is a few inches. On the tart? Barely an inch. But the measure of these arcs is the same. It's based on the degree of this angle, the tip of our piece.

Here's a pecan pie, also a favorite of mine. Okay, I really like pie. If we're trying to share this pie, and we cut an arc with a measure of 175 degrees, did we leave a major or minor arc? Remember, the major arc is the larger arc. So since the remaining arc is 185 degrees, which is larger than 175, it's the major arc.

How to Find the Measure of an Inscribed Angle