Dr. Keith holds a PhD in Criminology and has instructed adult and collegiate learners in theory, research, and application of the social sciences.

Examine methods to measure juvenile delinquency to understand its impact on society. See how it is measured, view strengths and weaknesses for uniform crime reports, learn about the national crime victimization survey, explore the self-report survey, and observe trends. Updated: 01/13/2022
Create an account

Imagine you're a crime analyst tasked with preparing statistics on juvenile delinquency and victimization. It's important to know the sources of your data, as well as which are the most reliable and valid for your work. The three instruments that you'll most likely use to collect this data include the following:

In your pursuit of juvenile delinquency data as a crime analyst, it's not only important to know which specific measurements to use, it's also important to understand the strengths and weaknesses of each one. Let's take a closer look at each data source. 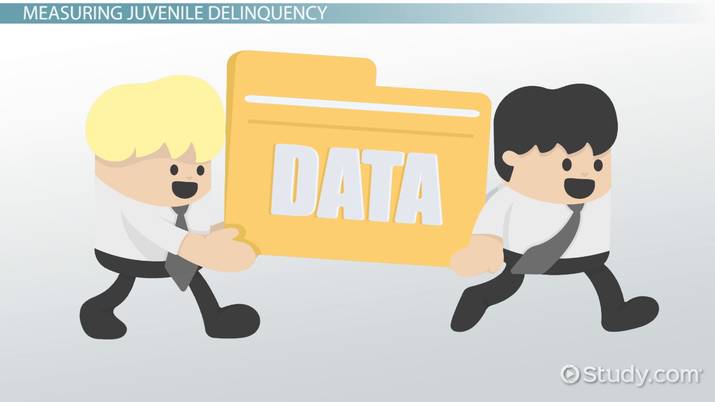 Coming up next: The Rational Choice Theory of Criminology

The NIBRS improved the original UCR data by expanding the summary crime statistics to include more specific victim and incident analysis, along with full incident data for all ancillary crimes in addition to serious crimes. It differentiates between individual, household, business, and commercial victims. It also collects data on victims under 12 years old, with a broad range of crime data categories and detailed offender information.

The NCVS collects data directly related to criminal behavior and detailed information about situational factors pertaining to crimes. It accounts for delinquency not known to police, reasons as to why crimes go unreported, and the changing trends of offender-victim dynamics, which vary based on crime situations and characteristics. The DVS expanded the NCVS to include more detailed analysis of the patterns of victimization in the teenage years by collecting information on conventional crimes, child maltreatment, peer and sibling victimization, and sexual victimization, as well as witness and indirect victimization.

The NCVS is limited to crimes of interest, as opposed to all crimes. It relies solely on victims' accounts of crimes. As a result, data may be rendered unreliable at times due to victim memory errors, errors in recalling how recently a crime occurred, deception, fabrication, juvenile victims' reluctance to share issues with adults, and sampling errors by not accounting fully for vulnerable populations, such as homeless children.

Self-report surveys have a major strength in that this data reflects juvenile offending without the information being handled by any part of the criminal justice system. For the most part, this type of survey has shed light on the vast amount of juvenile crime that has gone undetected by the criminal justice system, which is about four to ten times the amount reported to the UCR.

These surveys are reliant on juveniles and adolescents accurately self-reporting their own crimes. This is a weakness, like the NCVS, where memory errors, lies, and embarrassment can make the data unreliable. Also, the most serious juvenile offenders might not be accounted for since they may be incarcerated during the administration of the survey.

Juvenile Crime Trends in the U.S.

So, as a crime analyst researching and compiling juvenile victimization and delinquency statistics from the previously discussed instruments, you submit the following data:

Victimization has been linked to juvenile delinquency through the NIBRS and DVS data. In fact, 71% of all juveniles experience some form of victimization each year, with at least half from assault and bullying. The UCR and NCVS data reveals a juvenile offending and victimization overlapping trend. The delinquent juveniles that offend the most, by nature of their individual traits and association with delinquent peers, are also among the most victimized juveniles.

Juvenile delinquency trends complied from the most recent UCR data indicates that 8.5% of all arrests were juveniles between the ages of 13 and 17, with the age 17 group representing the most arrests. Most offenders arrested are males, though female arrests are on the rise. Most offenders arrested are also white, of non-Hispanic ethnicity, reside in low socioeconomic situations and disadvantaged areas, and in poverty status.

The UCR, NCVS, and self-report surveys are the most common measurements of juvenile delinquency. The UCR is a large, nationwide collection of juvenile arrests known by police. The NCVS is a self-report victimization survey of personal and household crime information, including the DVS, which collects data on juveniles ages 2 to 17 on 34 different types of victimization. Self-report surveys, like the NYS, report offenses of youths age 11 to 17.

The UCR is best for gauging overall national arrest data, but lacks crimes not reported to police. The NCVS is best for specifying victim and crime patterns and situational circumstances, including ones not reported to police. The data may suffer from victim error and fabrication and only covers crimes of interest. The self-reports expand our understanding of the prevalence of juvenile offending, but might suffer from youth embarrassment and lies.

What Is Due Process in Crime Control? - Definition & Guarantees