Nicky has taught a variety of chemistry courses at college level. Nicky has a PhD in Physical Chemistry.

Understanding temperature is important in daily interactions like choosing weather-appropriate attire or knowing how hot or cold something is. Explore how temperature is measured, how a thermometer works, and how to convert temperature from Fahrenheit to Celsius to Kelvin. Updated: 11/02/2021
Create an account

One of my favorite activities is watching the weather forecast on TV. I am, like many other people, obsessed with what the weather is going to do. Will it snow? Will it rain? Will it be sunny? How hot will it be?

Here in the USA, we still use the degrees Fahrenheit scale for weather forecasts. But, in many other places in the world, weather temperature is measured using the degrees Celsius scale.

The map on the left of the screen is showing various city temperatures ranging from 77 to 98 degrees Fahrenheit. On the map on the right, the temperatures are shown between 25 and 37 degrees Celsius. It is important that you can convert between these two units easily. We will learn how to do this a little further into this lesson. 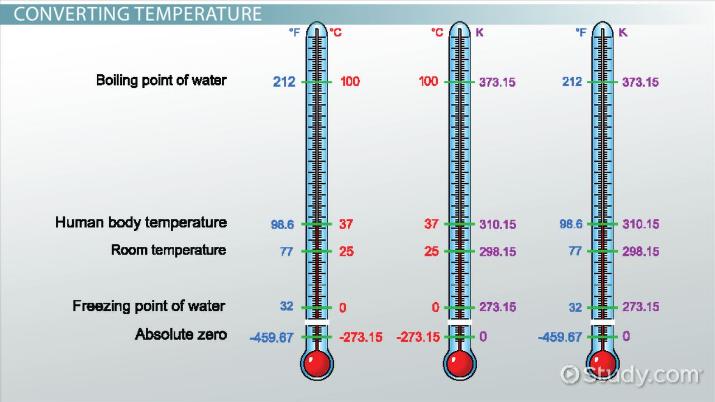 Temperature can be simply defined as a measure of hotness or coldness of an object. It is always in reference to a temperature scale.

Temperature is measured using a thermometer. When we use a thermometer, we are observing the effect of temperature on the substance inside it. In the old days, thermometers were made of mercury in glass. As the temperature got hotter, the mercury expanded and moved up a narrow tube. We could see what the temperature was by reading it off the scale of numbers on the tube.

But, outside of the USA and in many science applications, you will likely use the Celsius scale. This time, the normal freezing point of water is 0 degrees C, and the normal boiling point of water is 100 degrees C. Quite a difference in range! Now, you may have heard of the term 'degrees Centigrade.' If you have, then don't worry; that isn't something new. That is the same as degrees Celsius; they just changed the name from Centigrade to Celsius.

The final temperature unit you may come across is called the Kelvin. Note it isn't degrees Kelvin, just plain Kelvin. We certainly wouldn't forecast the weather using Kelvin, but it is very useful in many physics and chemistry applications. It is mainly used because the Kelvin scale has no negative numbers. The lowest temperature any substance can drop down to is 0K, or absolute zero.

Now that we have met the three different units of temperature, let's learn how to easily convert between them. Let's begin by learning how to convert from degrees Celsius to degrees Fahrenheit.

Before we dive into the math, it is good to get a feel for the sort of number you are looking for. I remember a little rhyme I was taught at school when trying to figure out the conversions between Fahrenheit and Celsius:

So, now that we know the sort of number we are expecting, let's do the math.

The temperature in Indianapolis will be 31 degrees Celsius today. What is this in degrees Fahrenheit?

Let's plug in the numbers:

Yes, that looks pretty hot to me!

Now we can do a very similar calculation if we want to convert from degrees Fahrenheit to degrees Celsius.

The temperature at the South Pole was measured at - 40 degrees F. What is this in degrees C?

We know intuitively that - 40 degrees F is very, very cold indeed! The freezing point of water is +32 degrees F, so we already know that the temperature in degrees Celsius will be well below zero degrees!

Again, let's plug in the numbers:

Yes, that is extremely cold! Not only have we just converted from Fahrenheit to Celsius, we have also figured out where the two scales coincide. The temperature in both degrees Fahrenheit and degrees Celsius is the same at - 40 degrees. The final temperature conversion we'll look at is converting from degrees Celsius to Kelvin.

Converting from Degrees Celsius to Kelvin

An organic liquid boils at 262 degrees Celsius. What is the boiling point in Kelvin?

So, putting in the numbers, we have:

Of course, if you want to come back from Kelvin to Celsius, you simply deduct 273.15 from the Kelvin number.

Let's summarize what we have learned. Temperature is a measure of hotness or coldness of an object. We measure temperature using a thermometer. A thermometer works because we observe the expansion of a liquid as the temperature goes up.

We have learned how to convert from degrees Celsius to degrees Fahrenheit by using the conversion factor TF = 1.8TC + 32.

If we want to convert from degrees Fahrenheit to degrees Celsius, we use the conversion factor TC = (TF - 32)/1.8.

We can prove mathematically that the Fahrenheit and Celsius temperature scales coincide at - 40 degrees.

Finally, we looked at the Kelvin temperature unit. The Kelvin is useful in many scientific applications. To convert from degrees Celsius to Kelvin, we use the conversion factor of TK =TC + 273.15.

When you've memorized all facets of this lesson, ensure that you're satisfied with your ability to:

Converting Celsius to Fahrenheit and Back

Metric System Measurements & Units | What is the Metric Unit for Mass?

How to Convert Units in the English System of Measurement

Estimating Square Roots | How Do You Find the Square Root of a Number?