Nicky has taught a variety of chemistry courses at college level. Nicky has a PhD in Physical Chemistry.

The mechanical equivalent of heat developed by physicist James Prescott Joule states that an amount of motion generates the same amount of heat. Explore heat, early historical views of heat, and the link between work and heat. Updated: 11/04/2021
Create an account

You have just made yourself a delicious hot cup of coffee. You put it on the table in front of you and wait for it to cool down. You can see the steam coming off the top and you can see it is clearly too hot to drink right now. The coffee cup may even be too hot to touch. If you measured the temperature of the coffee, it will be about 75 degrees centigrade and you know that is pretty hot. The room you are sitting in measures around 25 degrees centigrade, and over time, both the coffee cup and the coffee will cool down - soon it will be cool enough to drink.

Now, you also know if you don't drink all of your coffee, it continues to cool down to room temperature. Urgh cold coffee! So while you are waiting for you coffee to cool down, watch what is going on at the molecular level. The decreasing temperature of both the coffee and the cup are a sign that the average kinetic energy of the particles are decreasing - the molecules are slowing down. Both the coffee and the cup are losing energy. Energy is being transferred as heat to the surrounding air.

We can say that heat is simply the transfer of energy from a hot object to a colder object. Sounds simple, doesn't it? But, you may be surprised to learn that it wasn't until the middle 19th century that heat was understood in terms of energy. 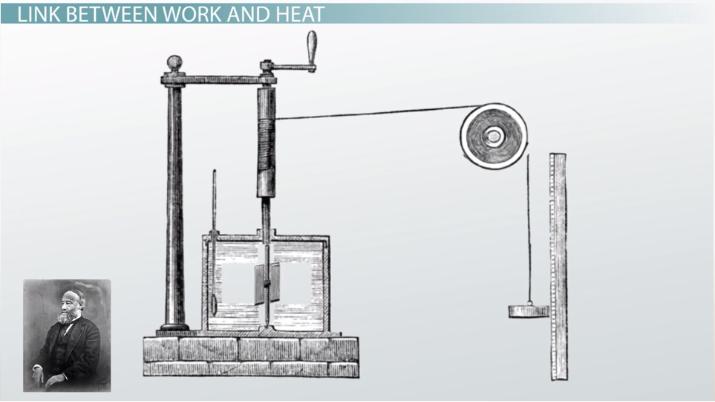 Fire and heat has always fascinated man, and even in the old days, they knew that fire and heat were different. They noticed that after the fire had gone out, the embers still gave out heat. However, it took until the 1700s for scientists to start to explain what heat actually is. The Scottish chemist Joseph Black was the first modern chemist to explain heat. He noticed that a kettle filled with water and ice placed over a fire did not change temperature until all of the ice had melted. Black explained his observation by suggesting that heat flows like a liquid.

The famous French scientist Antoine Lavoisier took these observations a step further and developed the heat-fluid concept called the caloric theory. This theory described heat as a tasteless, odorless, invisible and weightless fluid, called a caloric fluid. It also stated that hot objects contain more of this fluid than cold objects. Caloric was also thought of as a weightless gas that could pass in and out of pores in solids and liquids. This was a commonly held theory until the end of the 18th century. But very soon this theory was challenged and later became obsolete.

Link Between Work and Heat

It was during the 19th century that the field of thermodynamics started to take off. And it was during this time that our understanding of work and energy developed. In 1843, the English physicist James Prescott Joule calculated the mechanical equivalent of heat in a series of experiments. His most famous piece of apparatus, now called the Joule apparatus, is shown here.

The apparatus consists of a weight attached to a string. As it descended, it caused a paddle immersed in water to rotate and heat the water. Joule postulated that the gravitational potential energy lost by the weight being lowered down was equivalent to the heat gained by the water by friction with the paddle - friction is a form of heat. The barrel was insulated and Joule measured the temperature change of the water as well as the height the weight was dropped.

Using this information, Joule determined the mechanical equivalent of heat. Joule figured out that one newton meter of work is equivalent to 0.241 calories of heat. A calorie is the amount of heat required to raise the temperature of one gram of water by one degree centigrade.

Joule also stated that motion and heat were mutually interchangeable and that, in every case, a given amount of work (or motion) would generate the same amount of heat. He also claimed that heat was only one of many forms of energy (electrical, mechanical, chemical) and only the sum of all forms were conserved. These were revolutionary findings and greatly advanced our understanding of energy and energy transfer.

In honor of his work, the International Unit of Energy, the Joule, is named after him. Nowadays, we measure both heat and work in the same units, so that one newton meter, or Joule of work, is equivalent to one Joule of heat. Therefore, Joule also concluded that each calorie produced 4.18 Joules of heat.

In this lesson, you learned that heat is a transfer of energy from hot objects to cold objects. The first theory explaining heat was called the caloric theory. It stated that heat was a fluid that flowed between objects. This theory was later disputed.

James Prescott Joule developed revolutionary ideas on energy and temperature. He established the mechanical equivalent of heat, which stated a given amount of work (or motion) would generate the same amount of heat. He also discovered that heat was only one of many forms of energy and only the sum of all forms were conserved. The International Unit of Energy, the Joule, is named in his honor, and one calorie is equal to 4.18 Joules.

Completing this lesson results in the ability to:

Pendulum Definition & Equation | What is a Pendulum in Physics?