Shelby has a BS in Animal Science and a MS in Agriculture and Natural Resources. She taught high school and college animal science and biology courses for over 5 years.

View bio
Mechanical weathering can be defined as the breakdown of rocks due to natural forces like wind, water, cold, and heat. Explore the examples of the different types of mechanical weathering, including thermal expansion, frost shattering, plant activity, and abrasion affect rock formations. Updated: 09/23/2021
Create an account

Let's say you're a big rock living in a national park. For the most part, life is good as you spend your days living outside in the natural environment. You get warmed by the sun on a daily basis and get cleaned by the gentle rains that occasionally fall on you.

However, over time, the constant exposure to forces, such as wind, water, cold and heat, take their toll on your rocky structure. These forces lead to mechanical weathering, which is defined as the physical breakdown of rock by environmental factors. In this lesson, we will take a look at how this process works and see examples of the different types of mechanical weathering. 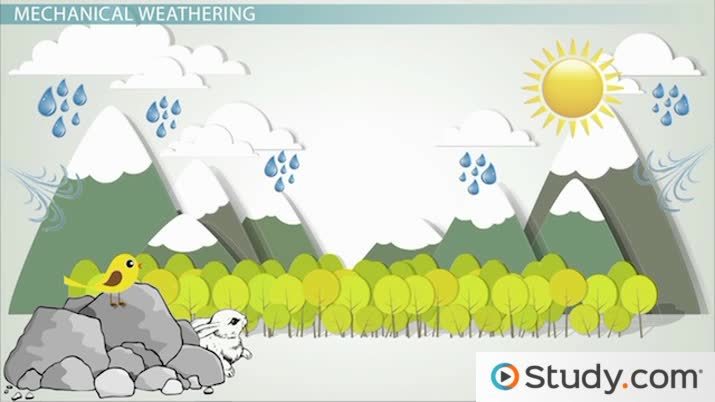 Coming up next: What is Chemical Weathering? - Definition, Process & Examples

The Process of Mechanical Weathering

Mechanical weathering is a physical process that is constantly happening in nature because nature is always active, even if this activity is happening slower than our senses can detect. For example, we feel when temperatures fluctuate from daytime to nighttime, but we can't see a rock expanding and contracting due to this temperature fluctuation. However, this unperceivable movement does occur and it weakens the rock, eventually causing it to fracture and break down. This is just one example of how mechanical weathering happens. Let's take a closer look at the different types of mechanical weathering.

We have been discussing how temperature fluctuations affect rocks. The process is known as thermal expansion, which is the tendency for minerals to expand and contract based on temperature. Rocks contain various minerals, and these minerals expand and contract at different rates when exposed to rapid temperature fluctuations such as day-night cycles. This causes stress and small cracks within the rocks and the gradual breakdown of the rock.

Grus is an example of thermal expansion at work. Grus is the accumulation of coarse-grained and loose fragments left behind by weathering. So, we see that grus is the direct result of the physical breakdown and weakening of rock over time. Therefore, if you were a rock climber and you saw a pile of small rocks gathered at the base of a rocky structure, you would be smarter and safer to move to a different location for climbing.

We learned that rocks expand and contract as a direct result of temperature. We see that water acts in the same way. Frost shattering is a type of mechanical weathering where we see the breakdown of rock due to the expansion of ice. It may help you to recall this term if you remember that frost is the formation of tiny ice crystals. For example, if you look out your window on a cold, autumn morning, you might see the glistening of small ice crystals that formed on your lawn overnight.

This is a frost, and it does not just form on grass. It can also happen in the crevices between rocks. During the day, when temperatures are warm, water trickles into cracks and pores within rocks. At night, when the temperature drops, the water freezes and expands. As this frost continues, the cracks within the rocks widen and eventually shatter portions of the rock.

In areas where temperatures often hover around the freezing point, road crews worry about frost shattering. If water seeps into cracks within a road surface, which is basically rock, it can freeze and expand. This ice will force small cracks to widen, making for a bumpy road.

It is also worth noting that in some areas, especially coastal areas, water that seeps into rocks may contain salt. If the water evaporates, the salt crystals are left behind in the cracks. Like water, the salt crystals expand when they are exposed to heat and can widen the cracks. This can lead to some very interesting weathering patterns on rocky coastal structures.

As we are seeing, the nooks and crannies found in rocks expose them to elements that can expand and cause weathering. These little crevices can provide just enough room for living organisms to enter and grow, so we see that plant activity is another way rocks can mechanically weather. The roots of plants and trees grow into cracks within rocks. As the roots grow in size, they widen the cracks. In the end, the roots often win the battle and push the rock, causing pieces of the rock to fall away.

To this point, we have looked at types of mechanical weathering that have to do with pressure building within rocks. However, rocks can also be worn away by a process called abrasion. Abrasion is the breakdown of rock by friction. With abrasion, we see that stationary rocks are literally scraped away by other loose rock and mineral fragments.

These small fragments are carried by the air or water and come in direct contact with the stationary rocks. You may have seen this process at work in rivers where the stones within the riverbed are nice and smooth. The stones are smooth due to the constant weathering force of water running over their surfaces. We also see the effects of abrasion in deserts where sand is picked up and carried by the wind. This flying sand acts like natural sandpaper, smoothing off the surface layer of rocks.

Let's review. Mechanical weathering is the physical breakdown of rock by environmental factors. This process is always at work, and there are a number of different types of mechanical weathering. Thermal expansion is the tendency for minerals to expand and contract based on temperature.

Rapid temperature fluctuations, such as day-night cycles, cause rocks to expand and contract. This causes stress within the rocks and small cracks form. Grus is an example of thermal expansion at work. Grus is the accumulation of coarse-grained and loose fragments left behind by weathering.

If water seeps into cracks within rocks, it can freeze and expand. Frost shattering is a type of mechanical weathering where we see the breakdown of rock due to the expansion of ice. If that water contains salt, the salt crystals left behind in the cracks can expand when exposed to heat and cause additional weathering.

Plant activity where the roots of plants and trees grow into cracks within rocks is another way rocks can break down under pressure. However, pressure is not the only way rock mechanically weathers. It is also prone to abrasion, which is the breakdown of rock by friction. This process may be seen in rivers due to the friction of running water over rocks or in deserts due to the friction of wind-blown sand on the surface layer of rocks.

1. In one plastic bag, place a piece of sidewalk chalk with enough water to cover the chalk. Seal the bag.

2. In a second plastic bag, place a piece of sidewalk chalk with enough water to cover the chalk. Add 1/4 cup of gravel to the bag before sealing.

4. Place three sugar cubes in a fourth bag with enough water to cover the sugar cubes. Add 1/4 cup of gravel to the bag before sealing.

1. Which substance broke down the fastest? What does this tell you about weathering?

2. If sidewalk chalk represents limestone, gravel represents hard rock and sugar cubes represent softer rock, what does this experiment tell you about mechanical weathering and the hardness of rock?

3. Which mechanical weathering processes are mimicked by shaking the bags that contained gravel?

4. How could you demonstrate thermal expansion in an experiment?

5. How could you demonstrate frost expansion in an experiment?

Factors that Affect the Rate of Weathering

What is Ice Wedging? - Definition & Examples

How a Landform Diagram Describes the Geological Progression of a Landscape