We are going to spend some time learning about epithelial tissues. This is the tissue that covers and lines your body and internal organs. This tissue has one side that is open to an internal or external space, and the other side is attached to connective tissue. 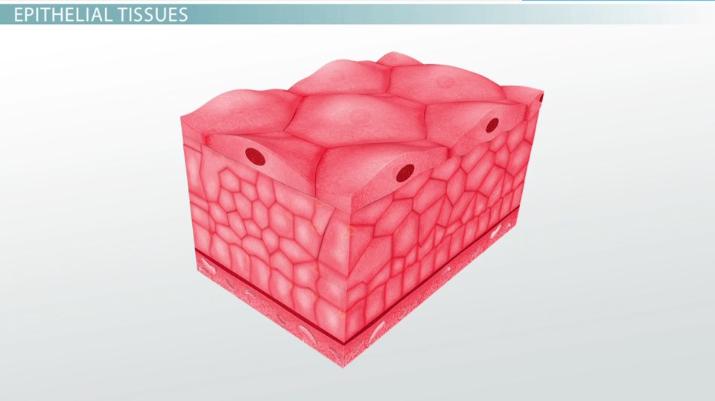 The simple epithelial tissues are considered simple because they only contain one layer of cells and all cells have the same shape.

Simple squamous epithelium tissues have one layer of flattened cells that allow substances to pass through them. The main functions for this tissue type are diffusion, osmosis and filtration. Simple squamous tissue is found in areas where these functions are needed, such as the air sacs of the lungs and the linings of the blood and lymph vessels.

Simple columnar epithelium tissues have one layer of cells shaped like columns. The cells in this tissue have their nuclei close to the surface attached to connective tissue and have goblet cells on the free surface, which secrete mucus. The functions of this tissue type are protection, secretion and absorption, and it is located in the linings of the stomach, uterus and intestines.

The last one in this category is simple cuboidal epithelium tissue, which has one layer of cube-shaped cells that allow for it to carry out the functions of secretion and absorption. Simple cuboidal tissue is found covering the ovaries and in the linings of the kidneys to secrete and absorb. It is also found in clusters in glands to secrete.

Stratified squamous epithelium include a layer of flattened squamous cells on the surface, and they function to protect the areas where they are located. You can find this tissue type in the lining of the beginning of the GI tract, such as the mouth and esophagus, and on the skin's surface.

There are two types of epithelial tissues that don't fit into either of the other two categories of epithelial tissues. The first one is transitional epithelium. Transitional epithelium contains six layers of various shaped cells and changes appearance based on if it is stretched or relaxed. This tissue is able to expand as needed and is found lining the organs throughout the urinary tract.

The other irregular type of epithelium is pseudostratified columnar epithelium. This type of tissue isn't truly stratified since it doesn't have more than one layer. The cells are oriented in opposite directions, so it looks like more than one layer. Most of this tissue has cilia on the surface and functions to secrete and propel mucus. This aids in protection for the organs of the upper respiratory tract. It is also found in some tubules and organs of the male reproductive tract. The tissue that appears here doesn't contain cilia and functions to secrete.

Study this video lesson, then use your enhanced knowledge to accomplish the following:

What is the Function of the Integumentary System?

What Is the Role of RNA in Protein Synthesis?

What Are the Organs of the Immune System?

The Integumentary System: The Epidermal Layer

Disorders of the Endocrine System