Kara Wilson is a 6th-12th grade English and Drama teacher. She has a B.A. in Literature and an M.Ed, both of which she earned from the University of California, Santa Barbara.

Robert Browning's 'Meeting at Night' is a poem about a man traveling to meet his beloved by boat. Review the background information for this poem, then analyze its central themes, rhyme scheme, sensory details, and imagery. Updated: 10/09/2021
Create an account

Robert Browning wrote 'Meeting At Night' in 1845 while he was courting Elizabeth Barrett. The two exchanged many love letters and secretly eloped in 1846, despite her father's protests. Browning's urgent love for Elizabeth is clearly expressed in this poem, and it is considered the most sensual poem that he had written up to that point. Browning uses the senses of sight, smell, sound and touch to help convey his passion and excitement as he travels by boat during the night to secretly see his beloved.

'The gray sea and the long black land;
And the yellow half-moon large and low:
And the startled little waves that leap
In fiery ringlets from their sleep,
As I gain the cove with pushing prow,
And quench its speed i' the slushy sand.

Then a mile of warm sea-scented beach;
Three fields to cross till a farm appears;
A tap at the pane, the quick sharp scratch
And blue spurt of a lighted match,
And a voice less loud, through joys and fears,
Than the two hearts beating each to each!' 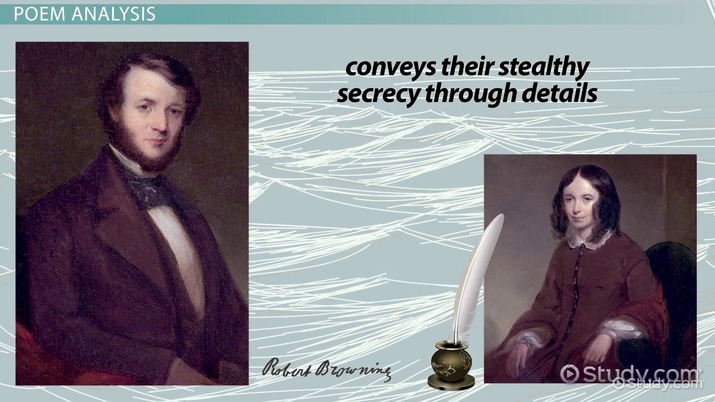 In the first stanza, the speaker is in a boat at sea beneath the half-moon noticing the way the little waves move: 'in fiery ringlets from their sleep.' The image of fiery ringlets can be seen in our mind; therefore this is an example of imagery. The speaker's lantern shines on the little waves, making them seem fiery, and fire is often seen as a symbol or representation of passion and love. Colors also help create imagery, and Browning mentions gray, black and yellow in the first stanza to help create images in the reader's mind. Another example of imagery is when the speaker comes ashore by mentioning the prow or the nose of the boat above the water. He gets closer and closer to the cove until he arrives in the 'slushy sand'. We can imagine the slushy sand, and this uses our sense of touch, since we know what watery sand feels like. Because this detail uses one of our senses, it is called a sensory detail.

In the second stanza, he mentions the 'sea-scented beach,' which ties to our sense of smell, reminding us of the smell of the salty air by the beach. The speaker goes on to describe how he travels on the beach then through fields where he arrives at a farm and taps on the window, mentioning a 'quick sharp scratch,' which we can almost hear by reading those words. A 'blue spurt of a lighted match' is clearly seen by mentioning the color blue, and an excited though startled voice is heard, which is said to be softer than their beating hearts. If this poem is indeed about Elizabeth Barrett, which historians assume, the mention of fear could be hinting at the fact that Elizabeth's father, who disliked Robert Browning, could find out about this secretive meeting. The poem conveys their stealthy secrecy through details such as: the poem is set at night, the speaker travels alone, he taps at her window pane and she quietly speaks to him.

Not only does Browning use symbolism, imagery and powerful sensory details, but he also uses the rhyme scheme or rhyming pattern of ABCCBA ABCCBA. The first and last lines of each stanza rhyme together: 'land' with 'sand' in the first stanza and 'beach' with 'each' in the second stanza. The second and fifth lines in each stanza rhyme together too, which further enclose the two middle lines, which rhyme with each other: 'leap' with 'sleep' in the first stanza and 'scratch' with 'match' in the second stanza. This rhyme scheme creates an interesting rhythmic flow that seems to sway the reader back and forth, much like the rhythm of the waves mentioned in the beginning of the poem.

For example, the fourth line of the second stanza is perfectly written in iambic tetrameter:

But then there are lines that add extra syllables, like this one:

The added syllable comes in with 'i' the slushy,' so that the first two syllables are unaccented and then the third one is accented. This is called an anapest, and there are a handful of anapests in this poem, which is why we say Browning loosely uses iambic tetrameter.

Browning's poem 'Meeting at Night' is far from a simplistic love poem. Although it does express passionate love and excitement through the scene described, it is also cleverly crafted using descriptive details and colors that help create imagery. Sensory details are used to evoke the reader's senses of smell, sight, sound and touch. The symbol of fire is also used in the first stanza to represent passionate love, and a rhyme scheme of ABCCBA ABCCBA creates a rhythmic flow in which the reader is gently rocked back and forth by the enclosed rhymes that fold back on each other, much like the waves do. Browning also loosely uses iambic tetrameter to create a more well-defined rhythm and pace by including four sets of beats that each contain one unstressed followed by one stressed syllable. Although some lines have extra syllables, the rhythm is still felt overall throughout the poem.

As this lesson comes to an end, you should feel comfortable with the following: