Jamie has had a tough life. Besides his job and school, he's had to help take care of his brother, who has schizophrenia, and his sister, who has serious depression. He's heard that times are very different now than they were just a few decades ago and he wonders how things would have been different if he and his siblings had lived in the 1950s.

So how would things have been different if Jamie and his siblings were living in the 1950s? To understand that, let's look at how mental institutions were run back then. 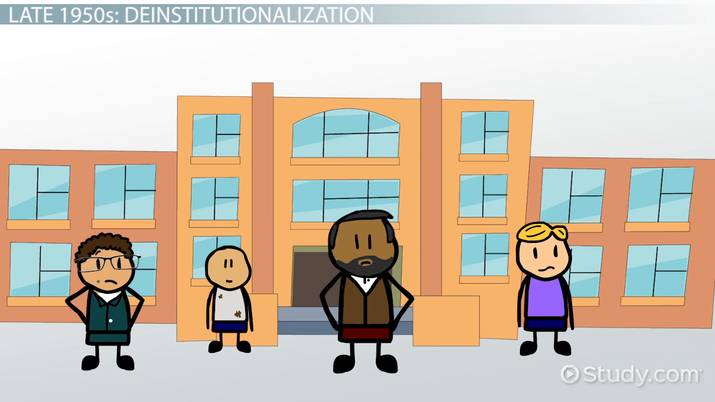 Coming up next: Noam Chomsky & Psychology

In the early 1950s, mental institutions were quite different, both in who they treated and how they treated patients. Any type of psychological abnormality, from depression to schizophrenia to intellectual disability (which used to be called mental retardation) could be treated by putting someone into an institution. Even someone who was mildly depressed could end up spending months or even years in a mental institution.

Some treatments were very different as well. In the 1950s, mental institutions regularly performed lobotomies, which involve surgically removing part of the frontal lobe of the brain. The frontal lobe is responsible for a person's emotions, personality, and reasoning skills, among other things. Lobotomies reduced violence and willfulness in patients, but often left them blank, with little emotion or personality. Today lobotomies are very rarely done. However, in the early 1950s, someone with depression, like Jamie's sister, could have had a lobotomy done. And, unlike today, where the procedure is more precise, back then a lobotomy could have left her permanently unable to function on her own.

More common, both back then and today, was a different treatment known as electroconvulsive therapy, also called electroshock therapy (ECT). This involves sending electrical shocks to the brain to change the way it functions. ECT is still used today, though not as often as it was used in the early 1950s. Back then it was frequently used for all sorts of psychological conditions, including depression. Today, Jamie's sister takes drugs for her depression and lives outside of a mental institution. Back in the early 1950s, it is likely that she would be living in an institution and have ECT and/or a lobotomy done on her.

By the mid-1950s, though, things were starting to change. Before the 1950s, the psychiatric world had seen limited success with psychopharmacological therapy, or drug therapy for psychiatric disorders. To remember that term, you can break it up: 'psycho,' meaning psychological, and 'pharmacological,' meaning drug (think of a pharmacy). The drugs used to treat psychological patients before the 1950s were still relatively rare and either not very effective and/or hampered by serious side effects. But in the early 1950s, psychopharmacological treatments became better and more widespread.

One of the first antipsychotic drugs, thorazine, came to market at that time. It was used to treat hallucinations and delusions in schizophrenic patients, like Jamie's brother. By 1955, the number of people being treated with drugs had exploded and it became more and more common. Even in the early 1950s, Jamie's brother might have been treated with a lobotomy or other more traditional psychiatric treatments, but by the mid-1950s, it's likely that he would have been given drugs, either on their own or with other treatments.

The widespread use of psychopharmacological treatments had a deep impact on mental institutions, though. As drugs became more effective, people needed to be confined to institutions less and less. More people were able to have psychopharmacological treatments as outpatients, or patients who live out in the world instead of in a hospital. By the late 1950s, a political movement toward outpatient care began to take off. While deinstitutionalization, or the mass movement away from treating psychological patients with inpatient care, didn't really come to full fruition until the 1960s, by the late 1950s it was starting to take root.

Since the late 1950s, deinstitutionalization has been a widespread, if controversial, practice in the U.S. and many other nations. There are both benefits and challenges associated with it, but the bottom line is that back in the 1950s, Jamie's siblings likely would have still been living in mental institutions. In contrast, today they both spend most of their time as outpatients. Even though Jamie's brother has spent some time as an inpatient in mental institutions, most of his life has been spent living out in the world. Even in the late 1950s, this would likely not have been the case.

Mental institutions are hospitals that specialize in treating psychiatric patients. In the early 1950s, long stays in mental institutions were often used for a variety of psychological issues. Common treatments included lobotomies, which involve surgically removing part of the frontal lobe of the brain, and electroconvulsive therapy, also called electroshock therapy (ECT), which involves sending electrical shocks to the brain to change the way it functions. By the mid-1950s, psychopharmacological therapy, or drug therapy for psychiatric disorders, became more common with the invention of thorazine, the first antipsychotic drug, which was used to treat hallucinations and delusions in schizophrenic patients. By the late 1950s, a political movement towards outpatient care began to take off as deinstitutionalization, or the mass movement away from treating psychological patients with inpatient care, because more common.

Deinstitutionalization Movement of the 1960s and Other Mental Health Issues

The History of Asylums in the 1800s

Chief Bromden in One Flew Over the Cuckoo's Nest: Quotes & Personality

McMurphy vs. Nurse Ratched in One Flew Over the Cuckoo's Nest

Love in The Great Gatsby

Nurse Ratched: Character Analysis | One Flew Over the Cuckoo's Nest by Ken Kesey

One Flew Over the Cuckoo's Nest Book Summary