Communication is vital for maintaining professional relationships. In this lesson, explore how to use communication in mentors and networking, and test your understanding with a brief quiz.
Create an account

Communication in the Workplace

See this? This is an extremely average, mid-level company. And this is John Study, an extremely average mid-level employee. John Study is in an average middle-management position, which means that on an average day he has to deal with a lot of people; people above him, people working for him, perhaps people working with him. You get the idea. So, with all of these people he has to deal with, John Study's success really relies on his skills at interpersonal communication, the direct sharing of information between people. You see, John Study understands that good communication is the difference between just being average and really standing out. 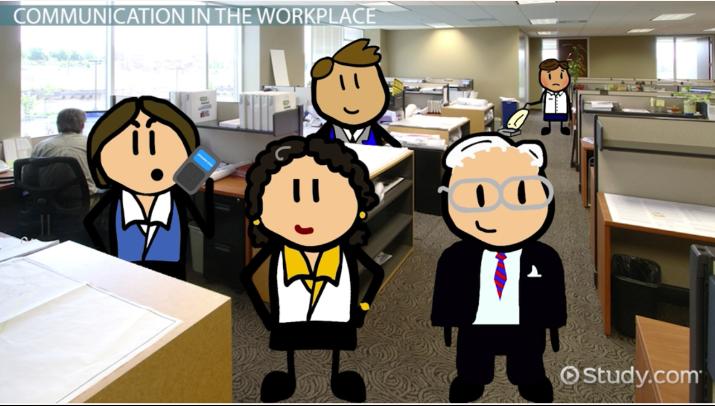 Coming up next: Romantic Relationships in the Workplace & Interpersonal Communication

One area where we see communication become very important in the workplace is through mentoring, advising or training, generally on a personal basis. Now, John Study, being in an average mid-level position, gets to be both a mentor and a mentee and he's going to need communication skills for each. As a mentee, John Study's main priority is active listening, which is defined by both demonstrating that the listener is paying attention and connecting words with an emotional response. This means that you are internalizing the information, not just vaguely hearing it. Active listening helps John Study to actually retain information from his mentor but also demonstrates that he is interested and invested in this relationship.

But that's just one side of it. As a mentor, John Study also needs to practice active listening, but for slightly different reasons. Active listening as a mentor requires being empathetic towards the needs of the person you are mentoring and using that empathy to create a professional relationship built on trust and understanding. Basically, use it to help you address the specific needs of your mentee. Mentors can often foster this relationship using the reciprocity theory, which states that people are likely to react in a similar way to others. Here's out it works: John Study is trying to build up a mentoring relationship, so he needs his mentee to feel comfortable. So John Study decides to talk about himself just a little knowing that according to reciprocity theory, it will encourage the mentee to open up about their own interests. John Study talks a bit more, the mentee shares a bit more, and they build up their ability to communicate openly. John Study can also use this technique to start steering the conversation in a direction he needs it to go in order to discuss the relevant items on their agenda, while still keeping communication casual and personal.

Being a mentee helps John Study learn more about the company. Being a mentor helps him pass on his knowledge. But both of these are great for networking, developing systems of interconnected relationships. Professional success very often depends on maintaining networks of professional contacts on whom you can rely for various kinds of support. Being both a mentor and a mentee helps John Study maintain multiple professional networks among both his superiors and the younger, up-and-coming generation.

So we can see how good communication skills are important to keeping these relationships open. However, networking is about a lot more than just mentoring. John Study's networks include his bosses, his employees, his coworkers, his peers and people in other departments with whom he often interacts. Through these networks, John Study makes sure that professional relationships have a personal touch, which helps him fit in better and give him better access to the various resources controlled by everyone else. However, there is always a risk here. Networking involves creating personal yet professional relationships, and that means two things. First, they must constantly be maintained. If John Study does not put consistent effort into a relationship, it loses the personal connection and that network could break. Secondly, it must be about more than personal gain. Some people see networking as a way to get ahead, but for John Study, it's just a way to stay connected. You see, if you only use your networks when you need a favor, eventually they'll catch on. Nobody likes to be used.

Through his skills at actively listening, empathy, and good communication, John Study is able to make sure that his networks always are about more than just business so nobody ever feels like they're being taken advantage of. His networks stay open, he enjoys his work because people like him there, and John Study remains more than just the average employee.

One of the most important practices to maintaining a good workplace environment is interpersonal communication, the direct sharing of information between people. Communication maintains all relationships, personal and professional. One area where this is important is in mentoring. Both mentors and mentees should practice active listening, demonstrating that the listener is paying attention and connecting words with an emotional response to internalize the information. This builds up respect and empathy. Mentors may also consider using the reciprocity theory, which states that people are likely to react to a similar way to others, to build up relationships and encourage communication. Beyond mentoring, networking is also important and is also maintained by communication. Networks are very useful, but you must actively keep them open and must use them for more than personal gain, otherwise people could feel used or taken advantage of. But with these communication skills, workplace excellence could be your average experience.

The Five-Stage Model of Conversation

Interpersonal Skills in the Workplace: Examples and Importance

The Importance of Motivation in an Educational Environment

The Needs Theory: Motivating Employees with Maslow's Hierarchy of Needs