In chemistry, there are compounds that are symmetric when you divide them down the middle. These compounds are called meso compounds. In this lesson, we'll learn about meso compounds and how to identify them.
Create an account 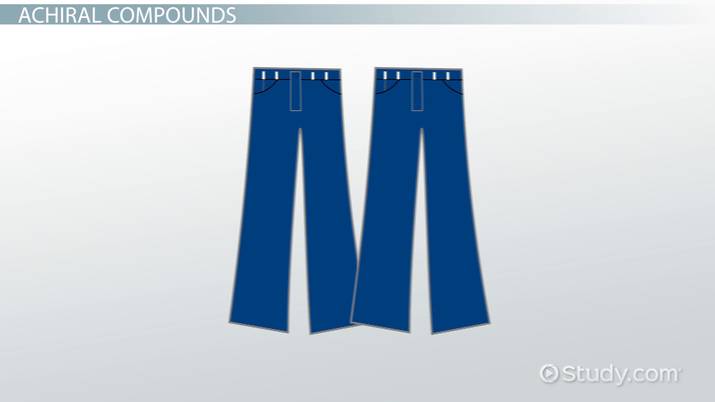 Coming up next: What Are Polymers? - Properties, Applications & Examples

An achiral compound is a compound that can be superimposed on its own mirror image, so a meso compound is achiral. When we think about plain blue jeans, achiral compounds are just like them: if we lay out two pairs of identical blue jeans and try to put them on top of each other, they will overlap perfectly and look exactly the same.

Let's imagine that light passes through an optical filter that polarizes light, or a polarizer, so that the light waves become parallel to one another. If this polarized light interacts with, say, the left side of 2,3-dichlorobutane, it will turn one way. Then, once it interacts with the other half (the right side), which is the mirror image of the left side, it will turn the polarized light back to its original position. The result is no net rotation of the polarized light, which makes the achiral compound optically inactive. Now we can also say that a meso compound is achiral and optically inactive.

We have to be careful of compounds that appear to be meso compounds but are not. If we look carefully at Example 1, we see that this compound has two chiral centers. However, there is no internal mirror plane.

At first glance, Example 2 looks like a meso compound, but when we try to locate the chiral centers, we find there are none. This is because the carbon atoms in the middle do not have four unique substituents - there are two hydrogen atoms attached to these carbons, so the substituents are not unique.

Meso compounds are compounds that have an internal mirror plane, or a plane of symmetry, and at least two chiral centers. The chiral centers should have four unique substituents. Meso compounds are symmetric, so one side and the other of the mirror plane are mirror images of each other. Meso compounds have superimposable mirror images, so this makes them achiral compounds, and therefore, optically inactive. A compound is optically inactive when polarized light interacts with it, and there is no resulting net rotation.

What are Diastereomers? - Definition, Examples & Separation

What is a Stereocenter? - Definition, Identification & Examples

What is the Difference Between Enantiomers & Diastereomers?

What is a Tautomer? - Definition, Mechanism & Example