Mesopotamians used land and water routes to reach their trading destinations. Explore how Mesopotamians traveled to and from their markets, including journeying in camel caravans, boats, and using wheeled conveyances to transport goods and people. Updated: 01/11/2022
Create an account

Meet Assurnasirpal. Yes, his name is unpronounceable. But that's because Assurnasirpal is an ancient Mesopotamian merchant. You didn't expect him to be called Bob, did you? Assurnasirpal is going to be kind enough to tell us what kinds of trade routes, passages and ways used with some frequency to allow for commerce between different places, and transportation, means of traveling, he uses to make some gold coin in this lesson. 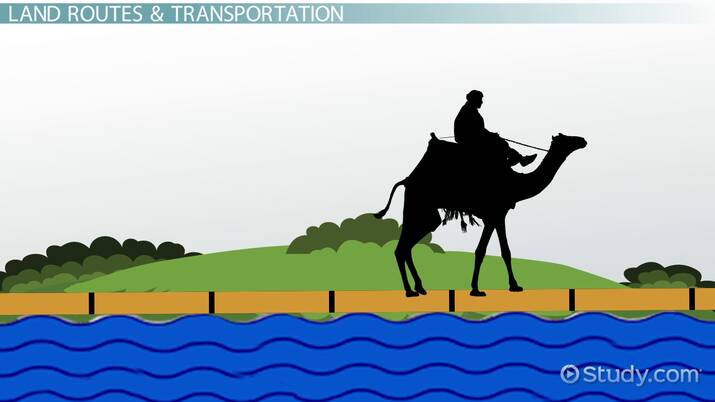 Try it now
Back
Coming up next: Mesopotamian Trade Products & Economy

Assurnasirpal wants to let us in on a little secret. If you want to make a killing out here, you have got to rely on water to transport your goods. Not just any water, either. Specifically, he tells us the best trade routes rely on the two main rivers of ancient Mesopotamia, the Tigris and Euphrates.

These are like the major highways in a country, except they're water-highways. Assurnasirpal says that, thanks to them, and their sub-rivers, canals, lakes, bays, and lagoons, you can reach almost every major place you need to get to. Just expect traffic. Literally. These rivers and canals can be crowded with ships and boats.

Ships and boats rarely used sails because the winds blew in an unsuitable manner on the two rivers. Instead, oars and poles were used to push boats here and there. Both male and female slaves could be found working on these vessels. But don't expect to sail right on through. The rivers had checkpoints that required a permit. So make sure to get that ahead of time to avoid unnecessary delays.

So where would you want to go to make a killing? Assurnasirpal says you should head over to the ports in Lagash and Umma to sell timber in southern Mesopotamia. If you want to stock up on copper to sell elsewhere, head on over to Magan. If you'd like to trade things like gold, copper, and pearls then make a stop in Dilmun.

In case the city you need to get to isn't near any water, then a land route is your best option. For travel purposes, you could buy or hire one of the following:

Assurnasirpal immediately tells us that you want to avoid the wheeled vehicles if you can. The roads around Mesopotamia are unpaved and it can be pretty muddy in a lot of places in ancient Mesopotamia, so the wheels get stuck and break down left and right.

Instead, he says, stick to the sledges, which are like large sleds on runners, as they can navigate the terrain a bit better, or use the so-called 'royal roads' if you want to avoid major potholes. These roads are maintained by the government specifically so people can quickly move between one location and another with as few obstacles as possible. These roads even had rest areas for travelers to spend the night.

If you're transporting things by land and need to cross a river, you can probably find a bridge, perhaps a pontoon bridge, or a ferry to take you across for a fee. Just save some money for any customs fees and duties as you cross from one territory or another. Actually, save up enough because Assurnasirpal says these weren't very well established, so you could end up paying more than you think.

If you want to avoid paying customs, you could take smuggler's roads and routes. Assurnasirpal says, though, they are often very rugged and dangerous. You might come up against some nefarious characters there. So just be careful. Some tips Assurnasirpal gives us:

Another thing you need to consider is the length of your journey. Assurnasirpal says that it could take months for one round trip. For example, going from Larse in southern Babylonia to Emar in northern Syria could take you 6.5 months roundtrip. You might end up using the great Euphrates road, which connects Syria, Mari, and Babylonia in the process. Regardless, say goodbye to your family for a long time!

Oh, and don't expect easy street signs either. While today's roads have distinct names, back then a road could simply be referred to as ''the great road along the near side of the Khabur.'' Other roads were more specific and said ''the highway which goes from 'this city' to 'that city.'''

Trade routes are passages and ways used with some frequency to allow for commerce between different places. Transportation can be defined as a means of traveling. The Tigris and Euphrates were the two great rivers of ancient Mesopotamia and the most important trade routes. On them, ships of various sizes, commonly propelled by oars and poles, would transport goods and people from one place to another.

Overland transport was also possible, but difficult. There were basically no paved roads in ancient Mesopotamia, but sledges, large sleds on runners, could be used to glide along on top of the dry grasses and earth. This meant most roads weren't well kept and travel was long and difficult. Animals like mules could be used to help transport goods. Armed guards might need to be hired in various places to prevent theft.

The Horse and Chariot: Tools of Empire Creation

The Horse and Chariot: Tools of Empire Creation