Mesopotamia developed cuneiform, which is one of the earliest known writing systems. Learn how cuneiform evolved from symbols and pictures to wedge shapes that bore little resemblance to the original writing in Mesopotamia. Updated: 01/11/2022
Create an account

Nowadays, the fact that you can read and write is taken for granted. In fact, it's not even seen as a major accomplishment. It's something that is part and parcel of life. But a long time ago, this wasn't the case. In fact, it was so rare that if you could read and write you could be set for life. Wouldn't it be nice if life were that easy today? Just learn to read and write and you'll be golden!

Let's go over the ancient Mesopotamian writing system and how it even came into existence in the first place. 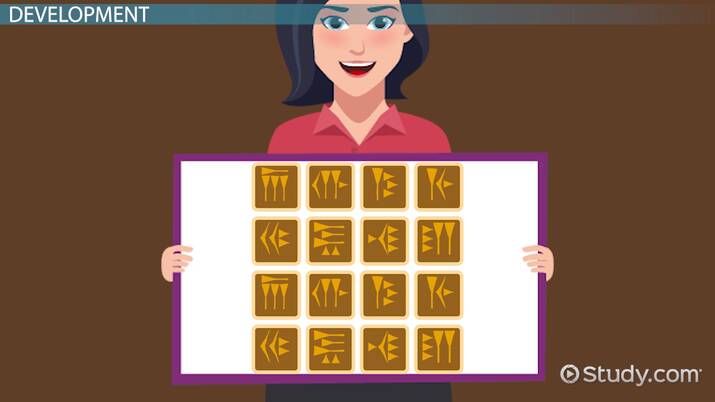 Try it now
Back
Coming up next: Mesopotamian Warfare: Weapons & Tactics

So what was the ancient Mesopotamian writing system? You may have already heard of it. Today, we call it cuneiform, from the Latin for cuneus, which means ''wedge'' and signifying the wedge-like shape of the writing you can see here.

Hundreds of cuneiform symbols were used to represent words and syllables. The system also had an alphabet so you could spell a word out like we do in English today. However, the writing system was complex and some parts of it are ambiguous. In fact, one symbol could represent everything from a sound or syllable to a concept or object.

And cuneiform was not a distinct writing system, per se. There were probably numerous languages that used this writing system. As a result, many cuneiform inscriptions remain undeciphered to this day.

Ancient Mesopotamians invented writing around the fourth millennium BCE. This was made possible perhaps as a result of numerous factors:

But the ancient Mesopotamians didn't create writing out of nowhere. People kept records before the invention of writing. Some would place sticks into the ground to count things like the number of sheep someone owned. Others would rely on clay tokens or small clay marbles for bookkeeping. Over time, in order to keep more specific track of things, markings developed on these tokens as the variety of goods increased.

Then, people began keeping track of things on clay tablets. At first, the symbols and signs were pictographs, or drawings of objects. For example, a donkey would look like a crude image of a donkey. Some of the symbols ancient Mesopotamians used were ideograms, or symbols that represented associated meanings. For example, a drawing of a foot could mean ''to stand'' or ''to walk.''

Some ancient Mesopotamian societies also created signs that were universal, in that they were accepted and understood throughout an entire region much like any language might be today. Otherwise it would simply be a haphazard collection of symbols that meant something to the creator and close associates but to nobody else. Over time, these pictographs and ideograms, which largely began to appear around 3100 BCE evolved into wedge-like indentations into clay, a system of writing we now know as cuneiform.

In an early version of cuneiform, around 2400 BCE, the cuneiform representations of a pictograph could look very similar to the pictograph itself. But as any system of writing and language develops over time into sometimes unrecognizable forms, the later forms of cuneiform are often (at least visually) very different from the original pictograph form.

The ancient Mesopotamians invented writing. Today, we call their writing system cuneiform, from the Latin cuneus, which means ''wedge,'' signifying the wedge-like shape of the writing. It probably came into existence around 3100 BCE and developed over hundreds of years from symbols on clay tokens, to pictographs (drawings of objects), and ideograms (symbols) on clay tablets. Over time, the pictographs transformed into an early version of cuneiform around 2400 BCE.

Slavery in Ancient Greece: History & Facts | Who Were Slaves in Athens?