If you were asked to describe an earthworm, what would you say? You might explain that it is small, thin and cylindrical in shape. It is pinkish in color, and is usually found burrowing through the soil. And you would most likely point out that its body seems to be divided into tiny vertical sections. The segmented body of an earthworm is its trademark, and truly sets it apart from many other types of worms. In the science world, body segmentation such as this is known as metamerism.

Metamerism means repeating segments that make up a whole. Although this body type is found in several different groups in the animal world, in this lesson we'll look at this trait in members of the phylum Annelida. In particular, we'll focus on an annelid with very pronounced segments, the earthworm. The question becomes, are these segments just for looks, or do they serve a purpose? In this lesson, learn about metamerism in annelids and understand what function they serve. 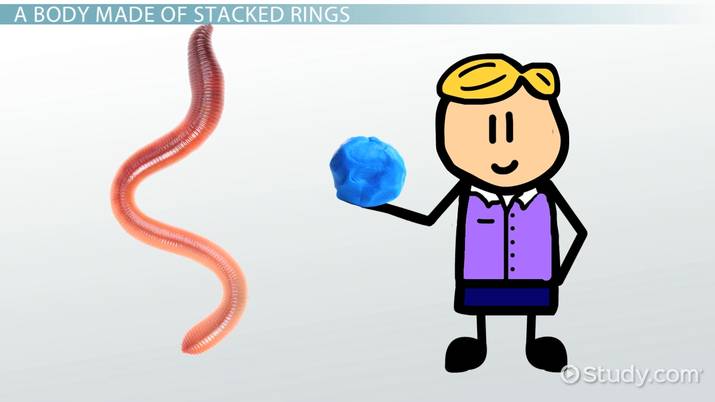 A Body Made of Stacked Rings

If you have a lump of clay around, you can easily replicate the body of an earthworm. Just take a ball of the soft clay, and roll it on the table until it has a wormy shape. Then, take a toothpick to draw the segment lines on the outside of the body, and voila, you have a segmented earthworm. Or do you?

Upon initial examination, it may look as though the segments on an earthworm are like those on the clay version. They appear to just be vertical lines on the outside of the body, like the ribbing on a pair of leggings. However, segmentation on an actual annelid actually goes much deeper than you might think. In fact, it would be much more accurate to say that an annelid is composed of separate rings that are stacked together, like a stack of candy Life Savers. This would explain the literal meaning of annelid, which is 'little rings.'

Let's take a closer look at the anatomical features of our segmented earthworm. The lines we see externally separating each segment are called annuli. Now imagine carefully slicing along each line to divide the earthworm into its segments. Internally, we would find repetition of tissues and organs, which demonstrates the concept of metamerism. Not only is the earthworm divided on the outside, but it's split internally as well.

Each segment, also called a metamere, has outer muscle, epidermis and bristles called setae. Internally, each has a branched blood vessel, a set of nerves and organs for excretion. Also found is a portion of the digestive system, as it runs the length of the body. Every segment is separated from the others by a partition known as a septum. In essence, each metamere is like its own little compartment sandwiched in between the others.

Although we have chosen the earthworm as our example in this lesson, it's important to note that the other annelids also exhibit metamerism. However, the concept of stacked rings is somewhat modified to be flattened in creatures such as leeches and the marine worms belonging to this group. But the repeating segments in these creatures still hold true.

The Purpose of Metamerism

Metamerism is beneficial to these organisms in several ways. Since each segment has its own set of muscles, each can move independently of the others. This allows for a unique type of mobility for annelids. The compartmentalization of the segments also lessens the impact of injury to the organism. If one segment of the creature is damaged, it doesn't necessarily mean that the rest of it is injured as well. Finally, metamerism allows for certain segments to specialize for certain bodily functions. For example, one segment contains the brain, while another contains reproductive organs. It is clear that these adaptations have worked well for the phylum Annelida, as they are as abundant as ever.

Metamerism is a body type exhibited by members of the phylum Annelida. It means that the body is composed of repeating segments attached to make a whole. These segments are known as metameres, and the lines we see externally separating each segment are called annuli. Metamerism is easily visible in earthworms. Each metamere contains several of its own organs, separated by partitions that create the segments internally, each called a septum. Benefits include better mobility, specialized segments and less likely chance of damage to the entire body.

The Origin & Early Evolution of Mammals