Discover how S.E. Hinton uses metaphor, a literary device, in his 1967 novel, The Outsiders. Explore specific examples in the text, such as metaphors comparing characters to animals, metaphors describing the setting, and metaphors for feelings. Updated: 12/14/2021
Create an account

Metaphors in The Outsiders

Metaphors are an example of the colorful language that S.E. Hinton uses in The Outsiders to draw the reader visually into the text. Metaphors compare two things that are not alike, drawing attention to a descriptive commonality. In this lesson, we will look more closely at some of the metaphors used in The Outsiders.

Sometimes, metaphors are necessary when there are no other words to describe the extent of something. When Ponyboy and Cherry explain how beautiful Sodapop is, Ponyboy says, ''Soda's movie-star kind of handsome,'' while Cherry says that Ponyboy's ''brother is one doll.'' In reality, Soda is a high school drop-out that works at a gas station and hangs out with a bunch of greasers, but his looks are so strikingly handsome that he is compared to a movie-star and a doll.

Ponyboy also uses a metaphor when he describes Dally, saying he has ''sharp animal teeth.'' That doesn't mean he has fangs like a tiger, but his teeth are likely more pointed than average, adding to his already animalistic tendencies. There are other times when Dally is compared to an animal, such as saying, ''he grinned wolfishly,'' when Dally told him about lying to the police about Johnny and Ponyboy's location. Tim Shepard, who is a hoodlum like Dally, ''had the tense, hungry look of an alley cat—that's what he's always reminded me of, an alley cat—and he was constantly restless.'' 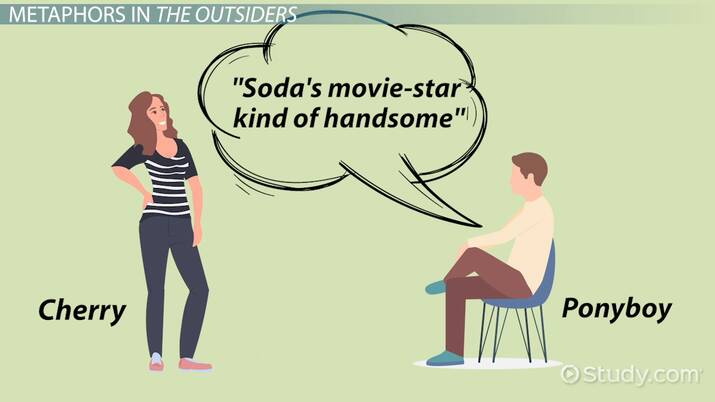 Coming up next: Foreshadowing in The Outsiders

From the back of the church, Ponyboy could see, ''the ribbon of highway and the small dots that were houses and cars.'' There are no ribbons and dots outside the church, but the metaphor is used to describe the long, flowing curves of the road with homes and cars so far in the distance that they look like little dots.

Hinton most frequently uses metaphors to compare feelings to things. Cold and icy are common descriptors. When he literally feels cold, Pony says, ''I couldn't have gotten much cooler without turning into a popsicle.'' But when something terrible happens, his feelings are described by comparing them to his insides becoming cold. When Ponyboy realizes that Johnny has killed Bob, his ''blood turned icy.'' This happens to Ponyboy again when Dally dies, ''My stomach gave a violent start and turned into a hunk of ice.'' Pony also turns ''cold'' when he realizes how much his fighting with Darry is hurting Soda.

Darry and Dally have blue eyes that are often compared to ice. Ponyboy's description of Dally includes, ''His eyes were blue, blazing ice, cold with a hatred of the whole world.'' When Darry waits to find out who will take him on during the rumble, he has ''eyes glittering like ice.''

Metaphors are frequently used by an author to paint a clearer visual for the reader. Metaphors compare two unlike things in order to describe the attributes of something. In The Outsiders, metaphors are used extensively to describe characters, places, and feelings. Hoodlum-types are repeatedly compared to animals, while internal ice is used to describe strong negative feelings.

Personification in The Outsiders

Figurative Language in The Outsiders

Foreshadowing in The Outsiders

Characterization in The Outsiders

The Outsiders by S.E. Hinton | Narrator, Tone & Point of View

Two-Bit in The Outsiders

Johnny's Death in The Outsiders

Nothing Gold Can Stay by Robert Frost | Analysis & Connection to The Outsiders by S.E. Hinton

Dally's Death in The Outsiders

Dally from The Outsiders

The Outsiders: When Johnny Kills Bob