This is Mexico. Or, as they call it south of the border: México. Mexico is a nation that is full of art, music, food, industry, sports, leisure, and tradition. But, who oversees all of this? Well, just like us, Mexico has a government. The Mexican government is in charge of governing all of Mexico, which is a pretty big job, and so this government is pretty extensive. But, what exactly does this government look like? Well, let's find out. 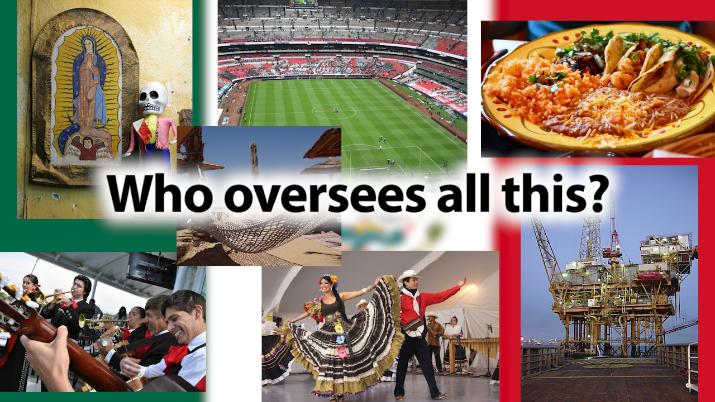 Coming up next: Impact of Mexico's Government Structure on the Economy

The Federal Government of Mexico

The first is the judicial branch, concerned with upholding laws and promoting justice. The Mexican judiciary is led by the Supreme Court of Justice of the Nation. This is a lot like our Supreme Court, and it presides over court cases of national significance and upholds Mexico's constitution. There are eleven judges on the Supreme Court.

The next branch of government is the legislative, in charge of making laws. Mexico's legislative branch is led by the Congress of the Union. Just like our Congress, Mexico's is bicameral, having two houses, which are the Senate and the Chamber of Deputies. The Senate has 128 representatives; the Chamber of Deputies has 500. These two houses debate and pass laws, create taxes, declare war, approve the national budget, and even make treaties with foreign nations. Since Mexico has a representative government, and Congress is filled with 628 officials elected to represent the people, this branch has lots of power as far as deciding what daily life looks like in Mexico.

Finally, we've got the executive branch, or the office of the president. Between the branches of government, this is the one that is the most different from what we're used to here in the USA. The Mexican president serves a term of six years, and once he or she has served, can never be re-elected. Thanks to a long period of dictators who took control of Mexico throughout the 19th century, the nation is a bit paranoid about presidential power, so there are a lot of guidelines in place to prevent the president from ever becoming too powerful. However, the president still does have lots of power, including the rights to veto congressional decisions. The president of Mexico, as of 2015, is Enrique Peña Nieto. He was elected in 2012, will serve for 6 years, and can never be elected again.

That's how the Mexican federal government functions. However, Mexico is designed as a federation of states, which means that states have their own rights and powers. There are 31 states in Mexico, and each one has it's own executive, legislative, and judicial branch. This means that every state can make its own laws, as long as those do not contradict the laws of the nation.

From there, the states are divided into municipalities, the smallest levels of political structures, sort of the way that we divide states into counties. Between the state and municipal governments, this is how day-to-day government is run. Who cleans the parks? How many taxes do we need for schools? What local holidays do we celebrate? These are all issues of state government.

On top of the 31 states, Mexico also has a federal district, or capital of the nation that does not belong to a state. You know how Washington, DC is not a state? Mexico City is sort of the same. It is a federal district and is not part of any state. It just belongs to the nation. However, it still has its own judicial, legislative, and executive branches, just like the states do. After all, there are still people who live there, and these people need governing. That's what governments do.

Mexico is a large nation, and it needs a pretty big government in order to keep things running smoothly. The Mexican government, much like ours, is divided into three branches to maintain a separation of powers.

The judicial branch is in charge of upholding the constitution and the law and is led by the Supreme Court of Justice of the Nation. The legislative branch, led by the Congress of the Union, is in charge of making laws and imposing taxes. This Congress is divided into two houses, the Senate and Chamber of Deputies. The executive branch is the office of the president, which oversees daily administration of the government.

Mexico has 31 states, as well as the federal district (the capital city that is not part of any state), and each of these has their own governments, each composed of the same three branches. The most local level of government is the municipality (the political units within a state) where most local administration occurs. With that, Mexico has a complete and functioning government. That's important since Mexico has quite a lot to govern.

Iran Government Type & Structure | What Type of Government Does Iran Have?