Michelangelo was a historic sculptor from Florence, born in 1475. Follow the biography of this prolific artist in his early work and apprenticeship under Lorenzo de Medici, learn how he produced 'Bacchus,' 'The Pieta,' and 'David,' and explore his complex relationships with the Sistine Chapel and the Roman Catholic Church. Updated: 10/28/2021
Create an account

'If you knew how much work went into it, you wouldn't call it genius.' These words are attributed to the famous Michelangelo, arguably one of the most famous, if not the most famous, artist of all time.

Michelangelo Buonarroti, known to many of us as simply Michelangelo, was born in March 1475 in a small Florentine village. His father was a government official with strong ties to the banking system of Florence. History doesn't tell us very much about his family, but we do know that he left his parents' home and moved to the home of a stonecutter. Some sources claim this was because Michelangelo's mother was too ill to care for him, while others claim it was Michelangelo's health that caused the move. Either way, the time spent with the stonecutter had a huge impact on young Michelangelo, the boy destined to become one of the most respected sculptors in history.

As Michelangelo approached his teen years, his father had him moved back to Florence. Some accounts claim this was born of a desire to have Michelangelo follow in his footsteps, becoming a banker or a government official. However, Michelangelo had different ideas. By the time he was 13, Michelangelo was studying under the artist Ghirlandaio. During this time, Michelangelo learned sculpture, painting and the art of fresco from the accomplished Ghirlandaio. Perhaps even more important, Ghirlandaio had ties to the wealthiest family in all of Florence, the Medici. 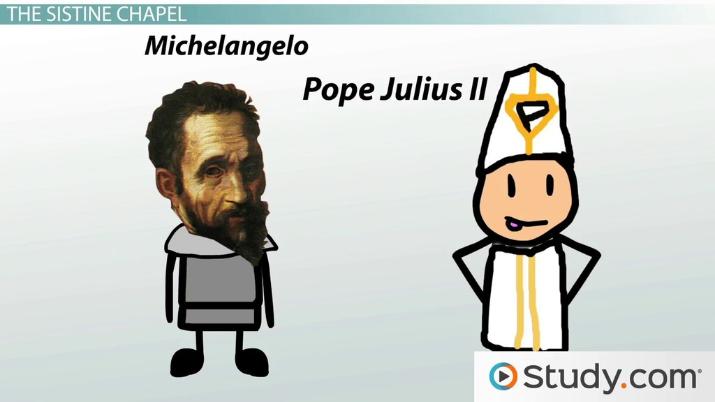 Coming up next: Conquistadors and Encomienda System: Definition & Savaging of the New World

Working for the Medici

The Medici were bankers and patrons to many artists of Florence. A patron is a person who gives financial or other support to a person, organization, cause or activity. In simpler terms, it's a person who wants some piece of art created, so he foots the bill for the artist's supplies and living expenses while the artist works. As soon as the wealthy Medici got a glimpse of Michelangelo's talent, their loose connection grew into a full-blown bond. In the early 1490s, Michelangelo left the apprenticeship of Ghirlandaio and actually moved into the estate of Lorenzo de Medici, a sculptor himself and the de facto ruler of Florence. While studying in the Medici gardens, Michelangelo met some of the world's most respected poets, scientists and philosophers. Their views rubbed off on the young Michelangelo's work, mixing religion with myth. Two of his most famous works of this time are the Madonna of the Stairs, also known as the 'Madonna of the Steps,' and the Battle of the Centaurs.

While working on his craft, it seems Michelangelo spent little time working on his people skills. Known to history as a rather moody, arrogant fellow, it seems he began gaining this reputation rather early. According to tradition, Michelangelo and a fellow student of the arts got into a quarrel, and the artist punched Michelangelo in the nose, breaking it and causing it to be crooked for the rest of time.

Sculpting 'Bacchus,' 'The Pieta' and 'David'

In 1492, Lorenzo de Medici, Michelangelo's patron, died. After his death, the Medici fortune began to dwindle. This, along with the outspoken words of Florence's new ruler Savonarola, a monk who radically opposed any sort of secular art and accused the Medici of heresy, caused Michelangelo to return to the home of his father. Upon his return, Michelangelo became enthralled with the human form, even studying cadavers to improve his craft.

By 1496, Michelangelo found himself in Rome, where he received a commission, or the hiring and payment for the creation of a piece. The cardinal himself wanted the young Michelangelo to sculpt a huge statue of Bacchus, the ancient god of wine. Although it seems the cardinal wasn't fond of the finished product, this didn't stop Michelangelo. Just a short time later, he sculpted the Pieta, which still stands in Saint Peter's Basilica of Rome. Of this magnificent sculpture, a fellow Renaissance artist wrote, 'It is a miracle that a shapeless block of stone could have been carved away to make something so perfect that even nature could hardly have made it better, using real human flesh!'

After the death of the radical monk Savonarola, Michelangelo returned to Florence. With Florence in political upheaval, Michelangelo was commissioned to turn a damaged piece of marble into the biblical hero David. This masterpiece of the human form shows the naked David poised like a Greek god with his eyes determined to protect his land. Many art historians believe this work, more than any other, portrays Michelangelo's devotion for the Republic of Florence and his desire to see it be set free.

With his star rising, Michelangelo was invited back to Rome by the Pope himself! Pope Julius II, being rather up there in age, wanted Michelangelo to design an over-the-top tomb for him. From this project came the famous Moses, which is still in Rome today. However, before his tomb could be completed, the Pope turned his attention to a new project.

In around 1508, Michelangelo was commissioned to paint the ceiling of the Sistine Chapel. Arguably, this would become Michelangelo's most famous work. Ironically, Michelangelo considered himself a sculptor, not a painter, making him none-too-thrilled to receive this job. In true, moody artistic style, Michelangelo finally agreed to the job but refused to adhere to the Pope's vision. Instead, he created his own. By the time this awe-inspiring work was complete, it depicted the story of the creation of Adam, the downfall of Adam and Eve and many other scenes, encompassing over 300 figures. The fact that this was all done in fresco, meaning a painting that is done rapidly in watercolor on wet plaster on a wall or ceiling so that the colors penetrate the plaster, makes this work even more impressive. Add to this that Michelangelo painted this high in the air while on his back, and the whole thing seems a bit supernatural.

After the death of Pope Julius II in 1513, Pope Leo X of the infamous Medici family came to power. This Pope, also enthralled with the talent of Michelangelo, charged him to design tombs for the Medici family. For this, Michelangelo headed back to Florence. However, Michelangelo and the rest of Florence were no longer willing to accept the Medici as their rulers. Not ones to be messed with, the Medici took the city by force, inducing Michelangelo to leave his precious Florence forever!

In the 1530s, a new Pope, Pope Clement VII, called Michelangelo back to Rome to paint the altar wall of the Sistine Chapel. This would become the Last Judgment, a gruesome scene, which depicts some going to Heaven but many, many others going to Hell. Art historians believe this was Michelangelo thumbing his nose at the greed and immorality of the Church of his day. To the horror of many, Michelangelo chose to depict these figures in the nude. This angered so many that another artist was commissioned to paint drapes over the naked bodies. In his later years, Michelangelo expanded his talents to include designing the new dome of St. Peter's Basilica. Although it was not completed before his death, its beauty stands as a reminder of his talent.

Although Michelangelo was famous for his moods and his outbursts, he did have friendships that held his heart. Many believe he had an affinity for many of the male models whom he sculpted. However, the nature of these friendships has never been proven. Another relationship, which has been recorded by history, was his friendship with the noble widow Vittoria Colonna, a poet of the 16th century. Although many believe this was simply a friendship born out of a mutual faith and a love of poetry, the two of them wrote sonnet upon sonnet, which they penned to one another. Legend holds that Michelangelo once expressed of this relationship something to the effect of: 'My sole regret in life was that I did not kiss the widow's face in the same manner that I had her hand.' Although time may have added a bit of romance to something that was mere friendship, their many interactions prove they were dear friends.

In 1564, Michelangelo breathed his last. His body was taken back to his beloved Florence and buried in the Basilica of the Church of the Holy Cross. Appropriately, his final resting place is adorned with sculptures. Although so much more could be said about this man and his talent, I'll end my narrative here and let the works of Michelangelo speak for themselves. They, more than everything else, prove his genius!

After you're done with this lesson, it should be easy for you to:

Michelangelo & the Painting of Sistine Chapel