Microcytic anemia occurs when the body's red blood cells are abnormally small. Learn about the diagnostic process and common causes of microcytic anemia, such as iron deficiency and thalassemia. Updated: 09/29/2021
Create an account

Putting the Puzzle Together

Let's see if you can guess what all of the following have in common by putting the pieces of this puzzle together: liver, peas, kettlebells and red. If you're stumped, that's okay. You're about to discover the solution as we explore the main causes of microcytic anemia. 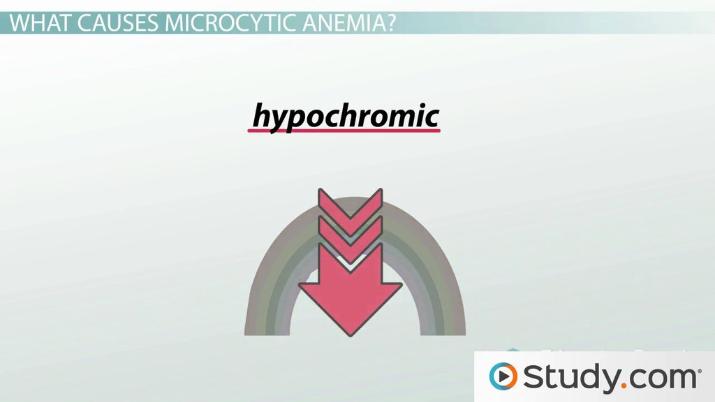 What Is Microcytic Anemia?

Anemia is a decrease in red blood cell number or function. When I say function, I'm saying there's either a decrease in the amount of hemoglobin or a lack of proper formation of it. Hemoglobin, a protein located within red blood cells, is the part of blood that gives blood its red color. It contains four oxygen binding sites and is responsible for carrying oxygen from the lungs to the tissues around the body.

Hemoglobin is able to do this thanks to a chemical element known as iron - you know, that stuff found in peas, the liver and spinach. Each hemoglobin molecule contains four iron atoms. Iron is also used to make kettlebells and other weights for fitness training. So, when you think of iron, remember that people pump iron in the gym, and iron is pumped around the body in your blood.

Another good way to remember this is to imagine that a red blood cell is like a train car zipping along tracks made of blood vessels. Each train car has cabins: our hemoglobin molecule. Each cabin has four seats: our iron atoms. In each seat can sit one oxygen molecule to be transported from their point of departure (the lungs) to any stop along the train tracks that may need them.

Anemia is classified as microcytic thanks to a measurement on a blood test called mean cell volume, or MCV. If the MCV is measured to be low, we term this microcytic. The most common form of microcytic anemia is known as iron deficiency anemia. I think you know why it occurs based on the term itself. Iron deficiency anemia is a microcytic, hypochromic anemia that results from low iron stores in the body, which in turn cause improper red blood cell production.

Now, I just threw in a term that I haven't introduced in this lesson yet. It's hypochromic. The prefix 'hypo-' refers to the fact that there is an abnormally low level, or too little, of something. The suffix '-chromic' references color. I like to remember this by the fact that 'chromatic' means 'very colorful.' So something that is hypochromic is paler than normal, and that's what our red blood cells turn out to be in microcytic, hypochromic anemia as a result of iron deficiency. They're small and pale. The blood test value that indicates hypochromia is known as mean cell hemoglobin concentration, or MCHC. If it's too low - meaning the concentration of hemoglobin is too low to impart a nice red color - then it's termed a hypochromic anemia.

This microcytic hypochromic iron deficiency anemia can be a result of inadequate dietary intake. Think about it. If you're not eating enough iron, then there's no way your body can make enough healthy red blood cells to carry oxygen. Iron is like one small, but important, part of our red blood cell puzzle. You can't complete the puzzle without that last piece. It just won't look right!

Another cause of the anemia is improper absorption. Sometimes the place where iron is absorbed (the small intestine) is damaged due to a disease process such as celiac disease. This results in improper absorption of iron. Another cause is increased losses. This occurs as a result of long-term or chronic blood loss from something like a gastric ulcer, parasites or destruction of red blood cells (more technically called hemolysis). In this case, you're just losing a lot of the iron-containing pieces to the puzzle left and right. Finally, there can be an increased need. This occurs in cases like pregnancy when we don't have enough iron-containing puzzle pieces to complete our picture.

Other than iron deficiency, another cause of a microcytic anemia is known as Thalassemia. This is an inherited blood disorder that causes an improper formation of hemoglobin, resulting in anemia. This time around, we may have enough puzzle pieces, but some of them are malformed. If they're malformed, they can't fit into the puzzle very well, resulting in an incomplete and improper picture in the end as well.

If you figured out the introductory puzzle before going through this entire lesson, give yourself a pat on the back. If not, then let's put the important puzzles of this lesson together to get the big picture.

Iron is an important component of hemoglobin, a protein of red blood cells that gives them their red color and carries oxygen throughout the body. Iron deficiency anemia is one type of microcytic anemia, which is when the MCV is low. Iron deficiency anemia is a microcytic, hypochromic anemia that results from low iron stores in the body, which in turn cause improper red blood cell production. It is hypochromic because the MCHC (mean cell hemoglobin concentration) is low, giving the normally red blood cells a paler color. And don't forget that another cause of microcytic anemia is Thalassemia, an inherited blood disorder that causes an improper formation of hemoglobin, resulting in anemia.

The goal of this lesson is to encourage your ability to: