Middle age is a time of transitions, when people's lives are changing rapidly. In this lesson, we'll look at two ways that people often react to those changes: mid-life crises and empty nest syndrome.
Create an account

Winnie is in her early 40s, and from the outside, things look good. She has a devoted husband, a good job, and her kids are getting ready to go to college. Life's good, right?

But lately, Winnie has felt adrift and a little bit blue. She wakes up in the morning, goes through her routine, and then goes to bed at night. She's starting to wonder if this is all there is to her life.

Winnie is in middle adulthood, also called middle age, which is the time of life between ages 40 and 65. During that time, lots of exciting things happen. Most people are at the peak of their careers in middle age, and are making more money than they have before. Their children grow more independent, which frees up more time. 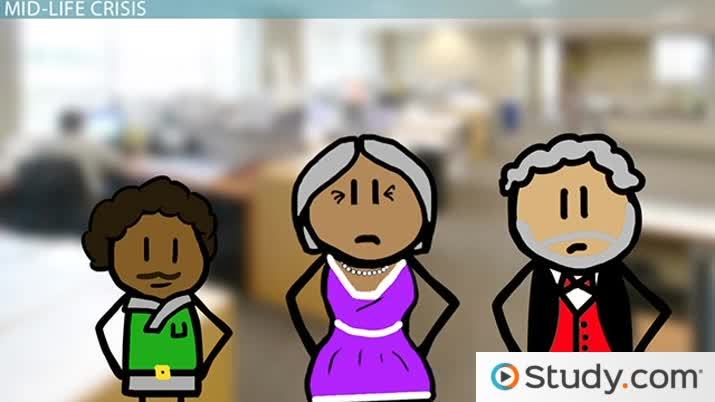 Coming up next: Stability vs. Change in Personality

Winnie's feeling depressed and a little out of sorts. Sure, her life looks good, and she doesn't want to whine about it when so many people have it worse. But she just feels like there has to be more to life than this rut that she feels stuck in.

Winnie is going through a mid-life crisis, or a crisis of identity or self-esteem that happens in middle age. Many people in middle adulthood experience a mid-life crisis. It can be triggered by any of the many changes that occur at that time. Watching parents age and die can cause a person to think about mortality and the inevitability of aging. For example, last year, Winnie had to put her mom in a nursing home. This affected Winnie because she began to realize that she's not far behind.

Watching children age can also have an effect on a person in mid-life. Winnie's children are teenagers and are more independent. This is another sign that Winnie is aging. And because so much of her life has centered on being a mother, the fact that her kids don't need her is also a little depressing.

Finally, many people look around them in early middle age and compare who they are to who they thought they'd be. As young adults, they might have had visions of themselves living glamorous lives, and reality might not live up to the dream. For example, Winnie always assumed that she'd be a high-powered executive, but in reality, she's just a middle-level manager.

So, what exactly happens in a mid-life crisis? The stereotype is of a balding man buying a sports car and having an affair with a young, pretty girl. But that's only part of the story, and everyone's mid-life crisis is different.

There's some research that men and women experience their mid-life crises differently. Men seem to feel inadequate and feel that they have to prove their manhood, which is why the car and young girlfriend are stereotypes that might be true for some men.

Women, on the other hand, tend to judge their ability as a wife or mother. Winnie, for example, is starting to worry that she's not a good mother because her kids don't need her anymore.

Either gender, though, can experience depression as a symptom of a mid-life crisis. Talking to a professional can help. Remembering the things that have been accomplished can also help. For example, Winnie can recognize that she's a manager, which is an accomplishment worth being proud of.

A mid-life transition is a reframing of mid-life crisis to focus on the transitional elements of middle adulthood. It is essentially a new way of looking at the change occurring during the mid-life crisis and viewing it as positive instead of negative.

In other words, seeing what Winnie is going through as a mid-life transition allows her to look at how her life is changing and stresses the positive changes, such as having more time to explore hobbies.

A mid-life crisis is only one of the transitions that people go through in middle adulthood. Another change that often happens in middle age is empty nest syndrome, or depression or grief experienced by parents when their children move out of the house.

Remember that Winnie's kids are getting ready for college. In just a few years, they will be gone, and Winnie and her husband will be living in the house, just the two of them, for the first time in decades. That's a huge change!

As with a mid-life crisis, empty nest syndrome provides opportunities as well as drawbacks. Sure, Winnie might feel depressed and sad to see her babies go off to college, but it also gives her and her husband a good opportunity to reconnect as a couple. It gives her more time to explore hobbies and other interests, like travel. Still, many people find that to deal with the negative feelings and to see the benefits of an empty nest, it's necessary to talk to a professional.

Middle adulthood is the time of life between ages 40 and 65. During this time, changes in a person's life can lead to a mid-life crisis, when a person experiences negative feelings due to the realization that he or she is aging. Further, some people in middle adulthood experience empty nest syndrome when their children leave home, resulting in depression and grief.

Reactions to Death Across the Life Span

Friendship and Marriage in Early Adulthood