Tina earned an MFA in Creative Writing, has several published novels and short stories, and teaches English and writing.

''Miguel Street'' by V.S. Naipaul focuses on 17 characters featured in one chapter each. Meet the residents of Miguel Street with an introduction to the men and women of the story and a look at the major themes that help tell their tales. Updated: 01/12/2022
Create an account

Miguel Street by V.S. Naipaul was published in 1959 and is comprised of chapters that serve as short stories. Each of the 17 chapters focuses on a character who lives on or visits Miguel Street. We see life through the eyes of the unnamed narrator and watch how the characters' lives change. What develops is a rich, historical description of life in Trinidad. Learn about the characters within the stories and the themes, or the main ideas, presented by the author of a piece of literature, that develop as we see life evolve on Miguel Street. 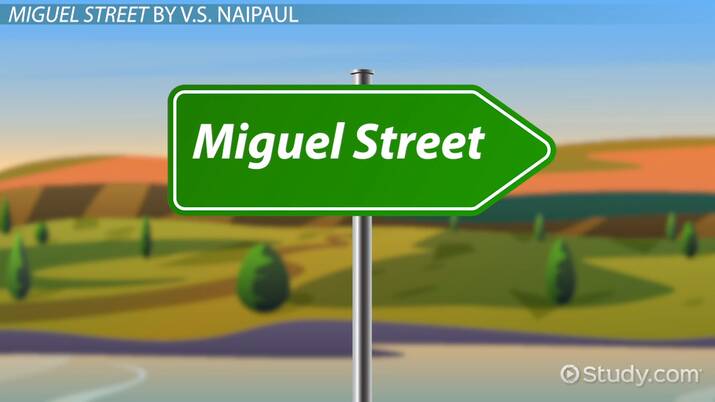 Coming up next: Tennessee Williams: Biography, Works, and Style

We see the goings-on of the people of Miguel Street through the narrator's eyes. He begins the story as a young boy who regularly interacts with some interesting characters. There are construction workers like Popo, drivers like Eddoes, and poets like B. Wordsworth. The men enjoy the ladies, especially George, who briefly runs a brothel-of-sorts. Elias, George's son, is educated and ''serious and ambitious.'' Man-man is also serious, even mad, regularly running for public office.

Life is not always serious, however. Morgan, whose house fire prompts an awe-inspiring fireworks display, is the comedian and ''pyrotechnicist.'' He may have also benefited from the teachings of Titus Hoyt. Hoyt is a ''a natural guide, philosopher.'' He's the street's educator and book enthusiast. Uncle Bhakcu is educated, but not about books. He is, per the narrator (but not his wife), a ''mechanical genius.'' The award for the saddest man on the street goes to Bolo, a barber duped by a house co-op purchase. The award for the most jovial goes to Hat. He taunts, commiserates, and bonds with the others. He offers advice (albeit unsolicited). As Hat observes, ''Everybody's growing up or they leaving.''

While everyone seems to be leaving, the women aren't. Dolly, Hat's wife, ''seemed to spend a great deal of her time at the front window looking out.'' Mrs. Bhakcu doesn't hide behind a window as she taunts her husband. ''But how you want me to shut my mouth up? You is my husband, and I have to stand up for you.''

Whether they intermingle or not, one common characteristic among many of the women is their maternal instinct. The narrator's mother gives guiding advice and commentary. Another mother, Laura, who, according to the narrator, is not much of a looker, has borne eight children. And as the women bring life to the community, for some of the women, like Miss Hilton, death is the only way out. ''While she lived, her front gate was always padlocked and no one ever saw her leave or saw anybody go in.'' The women are a stronghold among the men, even if they do not dominate the focus.

Let's look at some of the themes present in Miguel Street.

1. The Role of Women

Even in the background, the women control the livelihoods of those on Miguel Street, literally. The concept of motherhood is a common theme throughout. It's a way of life from which there is little to no escape. Mrs. Morgan recognizes, ''Life is a funny thing. . . a woman now trying to kill sheself because she can't make baby.'' Motherhood is expected. However, it's not without criticism. ''Now, to compare Laura, the mother of eight, with Mary the Chinese, also mother of eight, doesn't seem fair. . . But Mary, mark you, had a husband who owned a shop, and Mary could afford to be polite and nice to her children.''

Even the men have opinions. ''She have a lot of baby, take the baby by the fathers, and get the fathers to pay money. By the time she thirty thirty-five, she getting so much money. . . and she ain't got no baby to look after and no responsibility.'' On Miguel Street, motherhood is both an expectation and a prominent topic of discussion.

For many on Miguel Street, life is a struggle. The residents' socio-economic status may have something to do with this. Those on Miguel Street live in a community where books are second-hand, tricksters amble about, and drinking is standard. As the narrator grows, he begins to realize this. ''Is not my fault really. Is just Trinidad. What else anybody can do here except drink?''

For some of the men, the drinking is extensive, often prompting abuse. For many, it is an escape. While the liquor pours in quickly, the money doesn't. Those on Miguel Street struggle to find money.

There are betting gamblers, like Bolo. Others gamble on their incomes, like Mr. Bhakcu, who buys a lorry to earn more of an income. Many endeavors are failures. ''The lorry went in the end. And the loaders too.'' Characters like Elias and the narrator, though, find a way to make it out alive. For them, education is their salvation. They are the lucky ones.

With all that he witnesses—the pregnancies, the relationships, the struggles, and the laughs—the narrator learns about life. He comes of age, even if he does not anticipate it. ''It seemed that I would never never grow as big as Eddoes, never have that thing he called experience.''

The narrator gathers knowledge as he grows. He learns of cars from Uncle Bhakcu and of books from Titus Hoyt.

The narrator understands that ''the people of Miguel Street were always romancers.'' We watch a boy keep secrets for B. Wordsworth and critique Bolo the Barber's apprentice. By the end of the stories, the narrator leaves his community for a brighter future filled with education abroad. He leaves ''not looking back, looking only at my shadow before me, a dancing dwarf on the tarmac.''

All right, let's take a moment to review what we've learned. V.S. Naipaul's Miguel Street introduces us to its inhabitants who are rich in culture, if nothing else. As the narrator comes of age, we begin to see just how each character influences him. We also learned about Miguel Street's use of themes, which are the main ideas presented in a story by the author. In this case, we learned that the themes of motherhood and socio-economic status that emerge throughout help to show just how eventful, entertaining, fortunate, and unfortunate community life can be on Miguel Street.

A Bend in the River: Summary, Characters & Analysis