Mineral strength is calculated by measuring tenacity, hardness, cleavage, and fracture. Examine the methods of each of these concepts through examples, and learn about the usage of the Mohs scale to determine the hardness of a mineral, and find examples of brittle, malleable, sectile, and elastic minerals. Updated: 09/18/2021
Create an account

I used to work construction, and I still enjoy a do-it-yourself project every now and then. I remember being excited to get a carbide-tipped blade for my electric saw. The blade would cut through wood like butter and not get dull even if I accidentally cut through a hard nail! How can this be? As it turns out, carbide can cut through steel without dulling because it is stronger than steel. This lesson will discuss the various ways by which mineral strength is measured and expressed, including tenacity, hardness, cleavage and fracture. 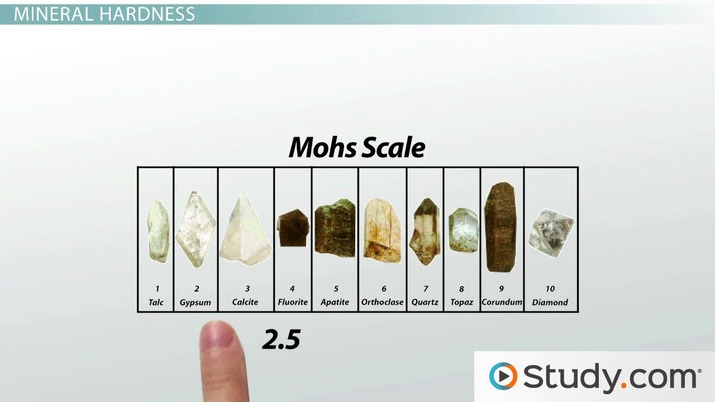 Try it now
Back
Coming up next: Mineral Density & Specific Gravity: Definition and Properties

Tenacity refers to a mineral's toughness or resistance to breaking or being deformed. Minerals such as halite, calcite and fluorite are brittle, as their molecules are held together by weak ionic bonds. Therefore, these minerals shatter when they're struck.

Metallic minerals, such as copper and gold, are said to be malleable, as they are easily hammered into different forms. Minerals such as talc and gypsum can be cut into thin sheets or sections and are said to be sectile (like section).

Mica is an example of a mineral that is elastic, as it reforms its original shape after a stress is released. Mica is used to make washers, as it is not only elastic but heat-resistant as well. Let me quickly note that mica is not the same as Formica, which is manufactured material commonly used on countertops. Interestingly, however, Formica is used as a substitute for mica in the industry, hence the name 'for - mica.'

You may have heard it said that diamonds are the hardest natural mineral known. While that may be true, what does it mean to say that one substance is harder than another? Hardness is the resistance of a mineral to scratching, and it is one of the more useful diagnostic properties. Relative hardness is easy to determine. All you have to do is rub one substance against the other. The substance that is not scratched is harder.

Mohs Scale is a relative ranking of the hardness of ten different minerals, with talc being the softest and diamond being the hardest. Let me emphasize - this is a relative scale and not an absolute scale. For example, gypsum (which is number two on the scale) is not twice as hard as talc (number one on the scale). Rather, gypsum is simply the second softest mineral on the relative scale. Furthermore, while diamond is ranked only one number higher than corundum, it is four times as hard. This scale is very useful in determining the relative hardness of other substances. For example, a fingernail's hardness is between that of gypsum and calcite, and it's expressed as 2.5 - that's between 2 and 3.

I mentioned earlier that carbide-tipped blades are used to cut through construction materials. As carbide is harder than steel, it can cut through steel nails. Carbide is a synthetic material that is similar to diamond but, fortunately, much cheaper. Even so, some drill bits are tipped with diamonds themselves, which are harder even than carbide. Indeed, these are real diamonds - but they're of the industrial grade rather than the gem grade that we use to make expensive jewelry. These diamond-tipped drill bits are used in oil drilling to cut through rock - and lots of it!

Minerals can be composed of different molecules and different molecules bound to each other with different strength. Cleavage is the tendency of a mineral to cleave or break along flat planes of weak bonding. Cleavage results in formation of sheets of material. Let's look at the micas, for example. Micas can be cleaved to form thin, flat sheets. It is important to note that not all materials exhibit cleavage. As discussed previously, mica is used to make durable washers, as it can be cleaved into flat sheets and retain its elastic property.

While some minerals exhibit cleavage, all minerals exhibit fracture . Fracture is the shape and texture of the surface formed when a mineral is broken or fractured. Fracture is an important diagnostic property, as minerals fracture the same way regardless of how they are broken. It is important to note that fracture differs from cleavage in that cleavage results in the formation of smooth flat sheets all the time.

Most minerals, such as pyrite and magnetite, exhibit irregular fracture, as they break into pieces with rough surfaces and random edges. Quartz exhibits what we call conchoidal fracture, as it breaks into pieces with curved and smooth surfaces. Limonite exhibits an earthy fracture, as pieces resemble that of broken dirt clods. If you look at the images, that's exactly what it looks like.

So, in summary, mineral strength is diagnostic in identifying a material and can be measured in different ways. Tenacity is the resistance of a mineral to breaking, and tenacity can be characterized as brittle, malleable, sectile and elastic. Hardness is the ability of a mineral to resist scratching, and the Mohs Scale provides a relative ranking of hardness for ten different minerals.

Cleavage is the tendency of a mineral to break along planes and form flat sheets of material. Finally, all minerals exhibit some form of fracture - that is, the shape and texture of the surface of the broken pieces. While most minerals fracture in irregular forms, other fractures include conchoidal and earthy.

After completing this lesson, students should be able to:

What Is Luster? | Types & Examples

Branches of Geology Overview & Examples | What is Geology?