George Orwell's novel '1984' was published in 1949 and remains popular to this day. Learn about the Ministry of Truth from the book in this lesson and test yourself with a quiz.
Create an account

When George Orwell's 1984 was published back in 1949, he probably had no idea of the huge role it would play in popular culture for years to come. The novel was one of the first in the dystopian genre, or stories that imagine a different, futuristic world full of misery and oppression. Just think of all the pop culture that has come from that genre in recent years -- movies and books full of zombies, apocalypses, and oppressive government regimes. Orwell's dystopia is no less horrifying (though it is without zombies).

1984 is set in the year 1984, but this 1984 doesn't have killer heavy metal bands or Star Wars. No, Orwell's vision of England -- or Airstrip One as it's called in the book -- is part of the superstate Oceania and is ruled by a small group of men operating from behind the scenes. Oceania's citizens are watched constantly by telescreens that afford them no privacy; telescreens are in every house, every workplace bathroom, every public place, and any type of free thought or indication of treason against the ruling Ingsoc party is punishable by torture.

Ingsoc is the ruling philosophy of Oceania, requiring complete obedience and devotion of every citizen, and it's symbolized by the imposing figure of Big Brother, who is the embodiment of the Party's values. Devotion to Big Brother is required of all Oceanians. 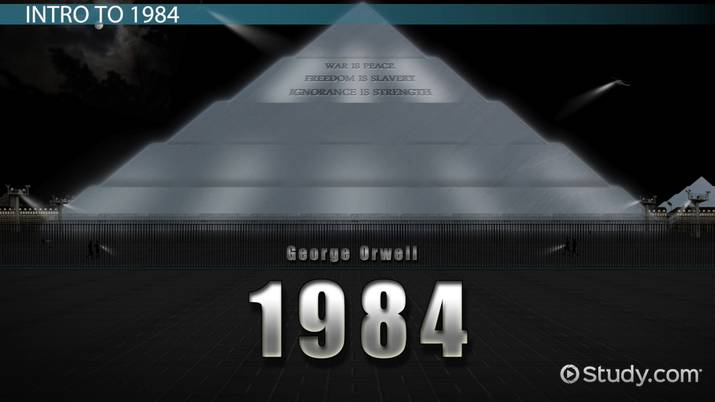 What Is the Ministry of Truth?

How does one oppress an entire superstate of people? Through a carefully orchestrated, super specialized system of government. The Ingsoc Inner Party members -- those guys behind the scenes pulling all the strings -- came up with an ingenious idea when they rose to power after World War II, according to the mythology of the novel.

With the help of constant surveillance, a completely new language called Newspeak that is designed to weed out words deemed unnecessary and therefore shrink the potential for free thought, and several specialized government ministries, the Inner Party would keep the masses oppressed and diligently serving Ingsoc. One of these ministries is the Ministry of Truth, shortened to Minitrue, dealing with history, art, news, and education.

So how does the ministry work? Imagine if your entire life was flooded with nonstop political ads, telling you why Candidate A is so amazing or Candidate B is terrible and stupid. Now imagine there is only Candidate A, and everything in your life is designed to tell you why Candidate A is amazing, has always been amazing, will be amazing until the end of time, and has never ever been wrong about anything. Ever. That's exactly what the Ministry of Truth does to the citizens of Oceania. Scary, right? What's scarier, actually, is how the Ministry of Truth goes about doing this.

Imagine if someone had the power to simply erase a historical event and anyone associated with it. Not only that, but they could also completely rewrite that historical event -- the Civil War, for example -- and say that not only did the Civil War not happen, but during the whole of the 1860s, Big Brother was inspiring all of Oceania to build factories in peace with one another. No blue and grey, no emancipation, no President Lincoln. Only Big Brother, always. Everyone and everything associated with the Civil War has now been erased from history, from books, from photographs, from records; in fact, one of Ingsoc's slogans is: 'He who controls the past, controls the future.'

And control the past is what the Ministry of Truth does. Of course, not everything is on a huge scale like erasing a war; most daily activities in the ministry consist of rewriting small glimpses of history, maybe from a few months ago or earlier that week, and perhaps this is the scariest aspect of Minitrue. There are legions of employees working diligently to revise even small facts in order to make Big Brother seem all-knowing.

Winston Smith, the novel's protagonist, goes to work at Minitrue one day at the beginning of the novel and rewrites a press release from earlier in the year in order to ''more accurately'' portray the number of boots Oceania produced in the last year, writing that -- surprise -- the quota Big Brother predicted last year has been surpassed! Smith knows, however, that no boots were probably produced.

The Ministry of Truth's hand can be felt everywhere in the novel 1984. From the very beginning, the reader glimpses what is on the facade of the building: ''War is Peace. Freedom is Slavery. Ignorance is Strength.'' Just from that quote alone, you can judge the world of the novel. Winston Smith, as you just learned, rewrites various articles and press releases in order to control Big Brother's image as the supreme ruler and leader of everything. It's stated that he's quite good at his job.

Smith is a fish out of water. He is constantly at odds with his work, understanding that everything he writes is a complete and utter fabrication put out by the Party in order to maintain obedience from the masses. So different is Smith that at one point he reminisces about the time he held indisputable proof of the lies told by the rewritten histories. He held a photograph that disproved what he had to write in a story. Though Smith must destroy this photograph, he holds the memory of it, but then is later forced to question that memory. See how genius the Ministry of Truth is? They turn absolute fact into questionable memory.

Once again, George Orwell's novel 1984 tells the story of Winston Smith, a man living in the dystopian society of Oceania. The Inner Party, a powerful group of men, rules behind the image of Big Brother, the all-seeing, all-powerful Party symbol. Ingsoc, the ruling philosophy of Oceania, demands complete obedience and devotion to Big Brother through a new language and various government ministries like the Ministry of Truth. The Ministry of Truth specializes in propaganda and especially manipulating and revising history.

Big Brother Is Watching You in 1984: Meaning & Analysis

Winston's Relationship with Julia in 1984