Scholars believe the Minoan civilization on Crete may have developed a trade empire and palace economy. Learn about the Minoans, an overview of the Minoan economy, and the controversy about their empire. Updated: 01/05/2022
Create an account

Before Greece was Greece, it was home to independent city-states like Athens and Sparta. They constantly competed for intellectual and military dominance. However, even these great civilizations weren't the first prominent societies of the region.

Much of what would become ancient Greek culture traces its lineage back to the Bronze Age civilization of the Minoans, centered on the island of Crete. Flourishing from roughly 2000-1500 BCE, the Minoans became one of the most powerful forces in the Aegean, expanding their cultural ideas across the Mediterranean and creating the first foundations of a unified Western culture. However, their power wasn't simply militaristic; it was economic. Through trade and exchange, the Minoans managed to secure lots of power and left quite a legacy. 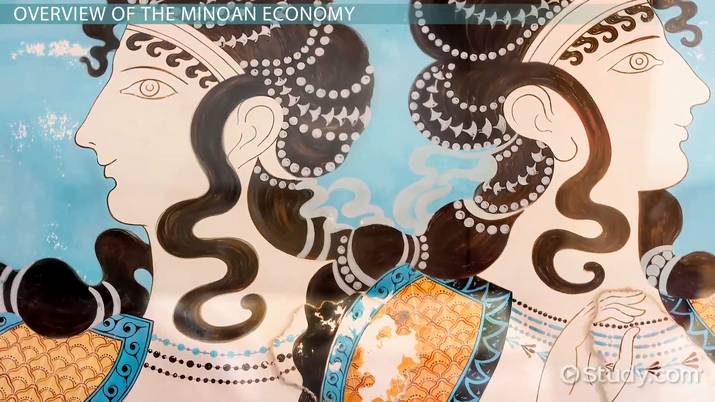 Overview of the Minoan Economy

Crete, the largest of the Greek islands, is built of fertile soils in a region of moderate temperatures and reliable rainfall. Basically, it's a great place for agriculture. Not only did the ability to grow lots of food result in the conditions necessary for the Minoans to develop the first advanced civilization of Europe, but it also gave them the tools they needed to build a strong international economy.

The Minoan economy was based in the maritime trade of agricultural products like wine, olives, and figs in exchange for minerals and other resources like copper and ivory. To facilitate this trade, the Minoans not only built quality roads that connected their farms and exchange centers to numerous ports around the island, but also maintained a massive and impressive fleet of ships. Evidence of Minoan products and cultural influences have been found in mainland Greece, Asia Minor, the entire Mediterranean coast of the Middle East, and even as far as Egypt. Products and artistic ideas from each of these cultures have also been found in Minoan Crete, so we can tell that there was a high degree of exchange between these groups.

Our understanding of the Minoan economy really rests on two defining principles. The first is that of a maritime empire. According to later mainland Greek sources, the Minoan kings developed an extensive maritime empire that stretched across the Aegean and eastern Mediterranean Sea. This would have given the Minoans something of a trade monopoly in this region, controlling ports and the exchange rates of various products. Allegedly, their navy was feared by all, and their merchants were found in every port of the region.

The Minoans also intentionally transported their arts and cultural ideas into regions where they held ports, helping to make other cultures friendlier to them.

The other definitive trait of the Minoan economy is how they managed their economies at home. The traditional view is that the Minoans were one of the first civilizations to develop a palace economy in which royal administrative centers were used to gather up and then redistribute all the products and services needed in Crete. Basically, instead of developing a monetary system where goods could be exchanged based on set values, the Minoans sent all their goods to these palaces, who then split them up and redistributed them among the people.

This assumption is largely based on the sudden appearance of major administrative palaces across Crete at the height of Minoan growth, as well as the lack of other standard systems of markets and money. Towns seem to have been built almost entirely around these administrative centers, which scholars assume were used to organize and redistribute commodities. Other scholars have suggested that, while the palaces may have overseen the overall functioning of this system, the actual process of gathering and redistribution happened in local villas owned by regional elites, rather than by a prince or king.

Our understanding of the Minoan economy rests on our grasp of its maritime empire and palace economy. Here's the problem, though: we're not entirely sure if either one of these actually existed. The Minoans were enthusiastic recorders of their history, but they wrote in an ancient and dead language that we still don't know how to read. In fact, we don't even know what they called themselves; the term ''Minoans'' is just what we call them.

In modern academic circles, the maritime empire is widely disputed, while the palace economy is assumed to be accurate - but everyone acknowledges that they could be wrong. What we know for sure is that, somehow, the Minoans created a powerful and successful Bronze Age culture, that they traded enthusiastically across the Mediterranean, and that their ideas helped found the basis of Western civilization.

Let's review. The Minoans were a Bronze Age civilization of the Greek island Crete, who flourished from around 2000-1500 BCE. During this time, they established a strong agricultural culture and turned that into a major trade empire that stretched across the eastern Mediterranean. Traditional views of the Minoan economy are based on two ideas. The first is that the Minoans maintained a maritime empire that let them spread their culture across the region as well as control major ports from Greece to Egypt. The second is that their domestic economy was one in which major administrative centers gathered all of the agricultural products, imports, and services in Crete and redistributed them among the people, which is known as a palace economy.

Unfortunately, we can't read the Minoan script, and so we don't know if these ideas are accurate. What we do know is that the Minoans had a major impact on Western civilization, and that whatever their economy was, it worked wonders.

Minoan Civilization Timeline, Location, & Map | Who Were the Minoans?

The Lost-Wax Casting Technique in Antiquity