The Minoan civilization on Crete appeared to be egalitarian in social structure and a bureaucracy with a king in its political organization. Learn about the Minoan civilization, the men and women, the palace elite, art, architecture, and agriculture. Updated: 01/05/2022
Create an account

Imagine ancient Greece and the structure of the society in terms of gender and class. You might be thinking of a society where women are inferior to men and laborers are inferior to the educated. However, on the island of Crete, which was not far from the mainland of what became Greece, there was a nation that may have been relatively egalitarian, meaning people of different classes and genders were equal. This was the Minoan civilization, which became, to some extent, the forerunners of the later Greek civilization. 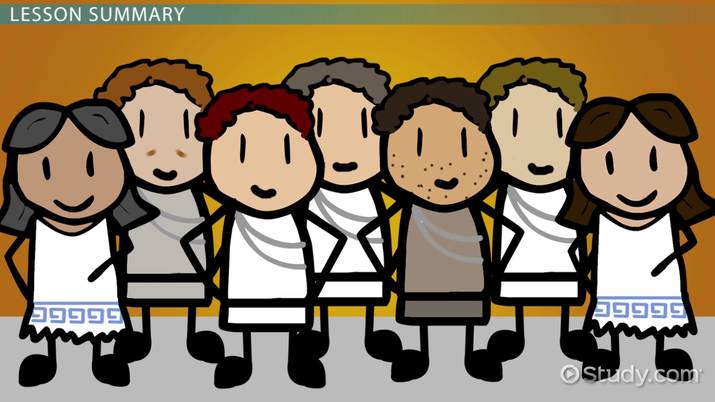 While the royalty of the civilization were kings not queens and men ran many parts of the society, the Minoan civilization seems to have allowed women to do the same things men did. This civilization probably did not have a land army, but a navy, so when the men in the navy were off at sea, women probably helped run much of Minoan society and politics. Women and men even participated in the same sports. Some of the most popular sports that both genders participated in were wrestling and bull-jumping, a sport where a bull ran at a person who would then try to jump and somersault over it. Also, unlike the later religion of Greece, which emphasized the male gods like Zeus, Minoan religion was primarily composed of worshiping goddesses.

In the royal palace, some of the elite were priests and priestesses who would be responsible for leading and performing religious rituals and services. Perhaps because it was a goddess religion or because the society had important roles for women, there were many more priestesses than priests. The civilization was a bureaucracy where there were different, non-elected people who ran different facets of the society. What little we can tell from the indecipherable writings of the Minoans shows that the merchants and scribes kept excellent records of trade and produce and probably ran the economy. As we cannot read the writings of the Minoans, the identity of the various kings they had remains uncertain. However, some speculate that the infamous King Minos, who was said to be the son of Zeus and to have built a complex labyrinth, was a king of the island.

Since we can't decipher the writing of the Minoans, we've had to rely on archaeological findings of artistic and agricultural products, which there are a lot of, to learn more about their social structure and political organization. There were many craftspersons who worked with a variety of artistic materials from metal to stone to ivory. They were also heavily involved in painting, both on pottery they made and on frescoes. Unsurprisingly for an island civilization, much of their art was of the sea. They also created and used faience, which was a glass-like substance often made by the Egyptians, by grinding quartz or sand with other compounds.

The agricultural products of the island weren't much different than those on the mainland. The farmers would use wooden plows either by hand or pulled by beasts of burden to plow the fields before planting crops like wheat and barley. They also harvested crops like olives, figs, and grapes. Farmers raised several different types of livestock, such as pigs, cattle, and goats.

Let's review. On the island of Crete several thousand years ago, a society called the Minoan civilization existed, which may have been relatively egalitarian, with women having large roles in society. Women even participated in dangerous sports like bull-jumping. The religion mainly revolved around worship of goddesses, and the religious leaders were typically priestesses rather than priests. The political organization was a bureaucracy where different people ran different parts of the society. In addition to the bureaucracy, a king also ran the civilization. According to legend, King Minos, the son of Zeus, was a king of the Minoans. Art and agriculture were very important and craftspersons created a wide variety of art, including art made from faience, which was a glass-like substance. In addition to crafting, farmers were important for their contribution to society by planting, growing, and harvesting a variety of crops and raising a variety of livestock.

Minoan Civilization Timeline, Location, & Map | Who Were the Minoans?