While hatred of women, full-stop, is the literal translation of misogyny, its modern definition reflects a fear or disdain for successful women, and while it resembles sexism, it is not. Learn what misogyny is, what it isn't, and see examples of misogynic behavior in this lesson. Updated: 11/15/2021
Create an account

Misogyny is defined as the ''hatred or fear of women''. However, although the word 'misogyny' does translate to hatred of women, it's not an all-encompassing hatred of actual women. Instead, it's more of a dislike of certain behaviors that misogynists deem unbecoming to women, such as power, independence, and ambition. This means that misogynists can actually come across as gallant and chivalrous because they see themselves as superior to women. They tend to want to live in the world of the 1950s where the man worked and the woman stayed home to cook and clean.

Although misogyny can resemble sexism, it is a little different. Sexism is actually the prejudicial behavior against women on the basis of their gender. This means that, unlike misogyny, sexism focuses on women as a whole, not on their behaviors.

Where the misogynistic behavior comes in is when women do not behave in the way men deem appropriate. Although each man is different, most misogynists believe that women should not hold roles of power, should not be strong-willed, and should always defer to the men around her. This belief can result in men being verbally abusive, and even physically abusive, depending on the severity of the misogyny, although this is not always the case. Misogyny can also lead someone to agree that abuse is permissible if done to correct unwanted behavior. 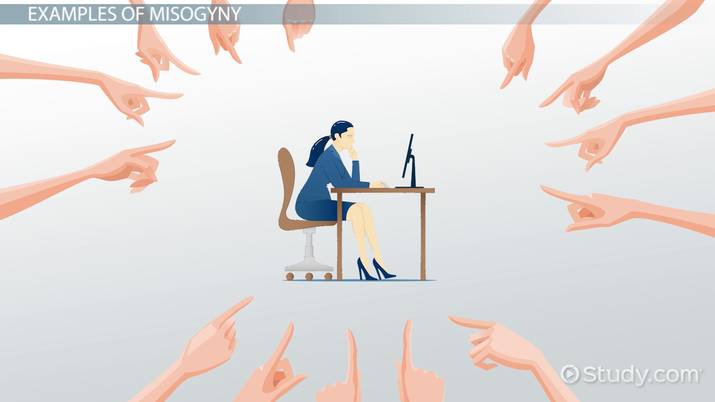 Coming up next: What is Civil Unrest? - Definition & Preparedness

There are several characteristics of misogynists. However, each person is different, so some men may have all of the traits, and some only a few.

These behaviors will show themselves in different ways, but one that's seen often is in domestic abuse. Emotional or physical abuse can be used to manipulate a woman to behave how the misogynist believes she should behave within the home. This is then followed by bouts of love and charming behavior when the women are behaving ''properly''. ''Barefoot and pregnant'' is a misogynist term used by men that that do not feel women have any other role outside of the domestic sphere.

Women can also be misogynistic, though this is rarer. There are women who adhere to a specific role, and any women that do not follow this self-conceived role are wrong. This can happen in belief systems that have a base culture of women being subservient, such as certain religious groups. Some women relish this role and hate the behaviors of other women who do not.

Misogyny is the hatred or fear of women, or at least that's how it translates; however, it is more so a hatred or dislike of certain behaviors that women may exhibit, such as strength or independence. Characteristics of misogynists can include arrogance, lack of respect, inability to keep promises, or even manipulation. Although misogyny is normally associated with men, women can also exhibit this behavior if they believe that they and their ways are superior.

Androcentric Bias: Examples | What is Androcentrism?

Reasoning Overview & Examples | What is Reasoning?

Family Characteristics, Functions & Types | What is a Family Relationship?

Puns in Romeo and Juliet by Shakespeare: Act 1 | Overview & Examples