Aida has taught Spanish at the University in Italy. Spanish is her mother tongue and she has a master's degree in Spanish Language and Literature.

Mnemosyne is the Greek goddess of memory and the mother of all muses. Explore the mythology surrounding Mnemosyne, her family tree, the symbol of Mnemosyne, and other interesting facts about the goddess. Updated: 01/21/2022
Create an account

Mnemosyne is the goddess of memory and the mother of artistic inspiration. Mnemosyne was a Titaness (a female titan) who had children with Zeus. She was so important to the Greeks that there were rivers and fountains with her name. Let's look at her genealogy, how she was represented, and some of the situations in which she intervened. 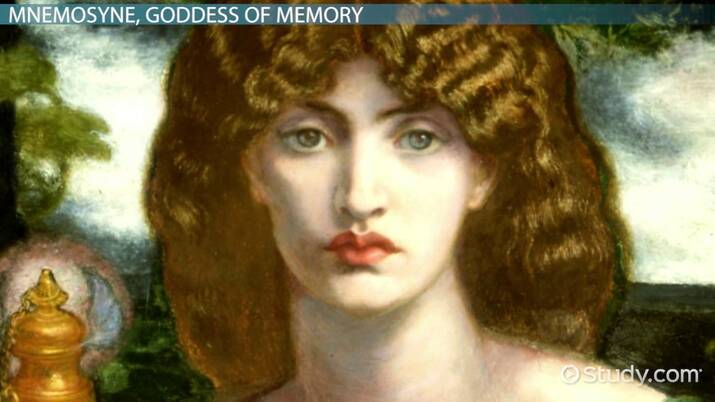 Mnemosyne had famous parents, a famous lover, and famous children.

According to Hesiod's Theogony , a poem about the origins of the Greek gods, at the beginning there was only Chaos. From this primeval Chaos came the sky and the earth (Uranus and Gea), who engendered the twelve titans, six male and six female. Mnemosyne was one of the female titans. In other words, she is the daughter of Uranus (the sky) and Gea (the Earth), the first Gods.

Mnemosyne spent nine nights with Zeus, and on each of these nights, he fathered a child. The nine children were born in the same birth and were known as the nine muses, the goddesses of artistic inspiration.

The nine daughters of Mnemosyne and Zeus were:

For the ancient Greeks, memory was a fundamental gift. It was what differentiated man from animals. Indeed, memory served not only to remember but also to reason and foresee the future. That's why Mnemosyne was a very important goddess. She was ''the one who knows everything, what was, what is, and what will be.''

In the days of Hesiod (about 700 B.C.E.), it was believed that kings and the powerful had the protection of Mnemosyne and, therefore, they could speak with more authority than other people. We can see the importance the Greeks attributed to Mnemosyne by looking at her family tree and interpreting it as a symbol.

However, despite her great importance, Mnemosyne does not have her own symbol, that is, she is not represented in a specific way like other goddesses are. This may be because she represents a very abstract concept that's very difficult to represent with concrete objects.

The Springs of Mnemosyne

The Greeks gave the name of Mnemosyne to several springs and fountains. According to tradition, anyone who drank from these waters could remember everything. To counter this, there were also the springs of Lethe (oblivion) that were usually next to the waters of Mnemosyne. There is a spring of Mnemosyne in the real world and another in the mythological world.

Livadeia is a town located in the center of Greece. It is the capital of the region of Boeotia. In ancient times, it was home to an oracle. People who wanted to consult the oracle had to make a difficult choice involving two springs of pure water. One was Lethe, oblivion, the other Mnemosyne, memory. People had to choose between forgetting their misfortunes and their sorrows (but also their joys) or remembering everything. Whoever chose to remember drank the waters of Mnemosyne.

The spring in the mythological world was in Hades, the Greek underworld. When people died, their souls separated from their bodies and went to Hades. There were two great lakes in Hades. The first was Lethe. All souls had to drink the waters of Lethe to forget who they had been. But the elect, the heroes, and the great men drank the waters of the other lake, Mnemosyne. In this way, they remembered everything.

As you have seen, for the Greeks, memory was a precious gift, remembering was a reward, never a punishment. It is ironic that today Mnemosyne is one of the most forgotten goddesses. Many people know about her daughters, the nine muses, but forget about her, the Titaness representing memory and, therefore, reasoning and intelligence. We do have one thing to remember her by: the learning techniques that aid information retention in our memory are called mnemonics in her honor!

Let's review. Mnemosyne is the goddess of memory and the mother of artistic inspiration. She was considered a Titaness because she was the daughter of the two originals gods, Uranus and Gea. She had nine daughters with Zeus, known as the nine muses. Mnemosyne was the goddess of memory and, therefore, a very important divinity for the Greeks, because they considered that without memory there is no rational thought nor artistic inspiration.

The Greeks gave the name of Mnemosyne to several springs and fountains. They believed that those that drank from these waters could remember everything. One of these springs is in Livadeia, a town in central Greece near the oracle, and another in myth, that of Hades, in the underworld. Though Mnemosyne is largely forgotten today, the learning techniques that aid information retention are called mnemonics after her.

Hyperion in Greek Mythology: God of Light | Who is Hyperion?

Megara in Greek Mythology | Who is Hercules' Wife?