Claude Monet was a French artist who developed the Impressionist style. Explore an analysis of the Impressionist Movement and Monet's legacy, and take a look at Monet's 1872 painting 'Impression, Sunrise' and its use of color, emotion, and lack of concrete objects. Updated: 10/15/2021
Create an account

A Painting with a Lasting Impression

When you think about the word 'impression' what does it mean to you? Maybe it's a feeling you get about a person or an idea you get from reading a magazine article or book. In the 19th century, the idea of giving an impression of something took on a whole new meaning. Artists looked for ways to be new and different in a world that was industrializing and becoming somehow more the same as mass-produced goods replaced handmade crafts. One of the most notable French painters of the late 19th century, who really took this idea of being different to heart was Claude Monet. His painting Impression, Sunrise, created in 1872, changed the way society viewed painting. 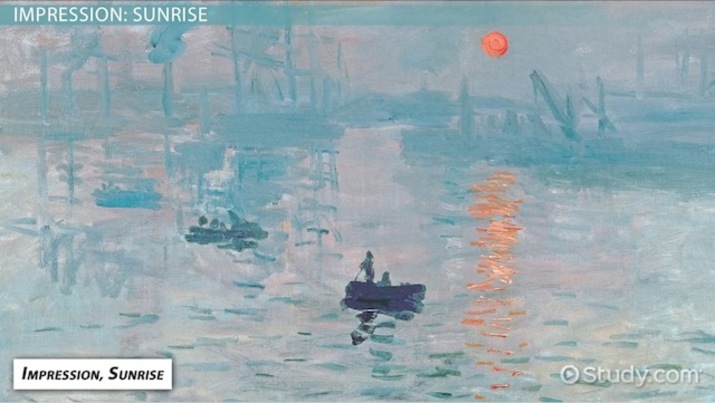 Claude Monet (1840-1926) was part of a loosely-associated group of painters called the Impressionists, a name that came from the painting you are about to take a look at. The Impressionist style was all about using color, natural light, and outdoor scenes.

Emotions to Guide the Painting's Interpretation

Unlike other styles of painting popular in the 19th century, such as Realism and Romanticism, Impressionism's goal was to show the feelings and emotions—the very impressions of a moment in time. The Impressionists also wanted to allow the viewer to interpret the emotions being shown. Most of the Impressionists also had paintings that were rejected by the Paris Salon, the government body that determined what paintings were considered art in France from the 1600s to the dawn of the 20th century.

The contents of the painting show a morning in the Port of Le Havre in France. The sun is rising over the port as three ships in the foreground try to capture our attention away from the many anchored ships in the haze in the background. The blues and grays throughout the painting reflect a somber mood, which is literally being cut apart by the orange of the rising sun, which brings new life to the port.

The ships in the background create a sense of depth for us, while the fact that we can't really make out the people on the boats in the foreground adds to this idea that the painting is supposed to be an impression of how the port feels in the morning and not an actual representation of the port on any given day. The small, short, dot-like brush strokes allow Monet to quickly capture this changing scene and give us an even greater sense that the moment is not permanent.

If you didn't manage to grab all that feeling or emotion from the painting, don't worry. Art historians have spent a lot of time learning how to analyze works of art. Maybe you just got a sense of new beginnings, hope, confusion, or change in the painting. The great thing about Impressionism is that the paintings of this movement are open to interpretation.

Claude Monet's Impression, Sunrise was not well-received by art critics in his time. He believed it was mainly because they failed to understand the point he was trying to make with the painting about the contrast between the peace in the foreground of the painting and the industrial chaos in the background.

Impression, Sunrise was not Monet's only contribution to the Impressionist Movement. In fact, Monet was considered the most true of all the Impressionists. He created over 3,000 works that exhibited emotion and feelings more than they exhibited objects meant for interpretation. He participated in a handful of private art shows organized by the Impressionists, who also included Edouard Manet, Alfred Sisley, Edgar Degas, Camille Pissarro, and Pierre-Auguste Renoir. By the early 20th century the Impressionist movement had disbanded, leaving behind hundreds of works of art that have gained greater appreciation today than they had when they were made.

Impression, Sunrise was stolen from the Musée Marmottan Monet in France in 1985, along with several other well-known Monet paintings. They were recovered in 1990 and are back in the same museum.

In this lesson, we looked at Claude Monet's Impression, Sunrise and how it exhibited the Impressionist style through its use of color, emotion, and lack of concrete objects. The painting of the Port of Le Havre in France shows the sun rising over three hard to make out ships in the foreground and creates depth in the background by showing a number of other ships in port. Monet's painting was not well-received by critics in his time, perhaps because they misunderstood the point of the work, which was to show an emotion and not reality. Monet created over 3,000 Impressionist paintings and showed his works with other members of the short-lived movement, including Edouard Manet, Alfred Sisley, and Camille Pissarro.

The French Salon in the 19th Century | History, Importance & Role