A store of value is something that maintains its worth both in the present and in the future, with money being one such commodity in modern economies. Explore how money functions as a store of value while comparing to similar assets and systems. Updated: 10/13/2021
Create an account

What is a Store of Value?

Money is a type of asset in an economy that you can use to buy goods and services from other people or businesses. One of the functions of money in an economy is that it serves as a store of value. A store of value is something that people use to transfer purchasing power from the present to the future. While money is an asset that can store value, it's not the only type. Gold and silver, for example, act as stores of value. 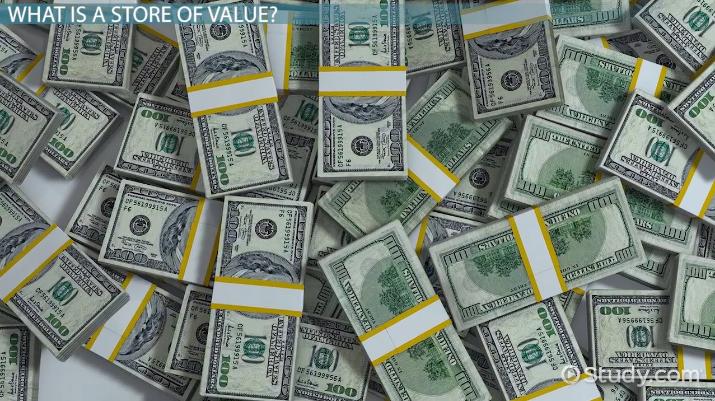 Try it now
Back
Coming up next: Money as a Unit of Account: Definition, Function & Example

The ability for people to store value is fundamental for the functioning of a modern economy. Since money is accepted as a store of value, trade is much more efficient because money is accepted by nearly all people in the economy as a store of value. When an individual or business accepts money in exchange for a good or service, the seller can store the money, such as in a bank account, and retrieve it later to purchase a good or service in the future.

The ability of money to act as a store of value also gives people a degree of predictability because money will hold its value over time. This predictability means you don't run the risk of losing your wealth by failing to immediately spend it. For example, if you exchange a paperback book for a pie, the pie has value but only so long as it can be consumed. If it spoils, it has lost its value. Money, on the other hand, doesn't spoil.

Money isn't without some problems. Sometimes the value of money can become unpredictable, such as during hyperinflation, when the prices rise so fast that money becomes practically worthless. In times of hyperinflation, people often will turn to bartering for goods or services or to other assets that act as a store of value, such as gold or silver.

Let's review. Money is a type of asset in a modern economy that can be used to purchase goods and services. One of the most important features of money is that it acts as a store of value, which means that you can not only use it to trade but also store it for future use. While the value of money is usually predictable, during times of hyperinflation it may become worthless, and people will replace it with barter or other assets that serve as a store of value, such as precious metals.

Money as a Unit of Account | Definition, Examples & Function

Marginal Propensity to Consume Formula | How to Calculate MPC

What is Deferred Payment? | Examples

What is Money? | Types and Form of Currency

Deflation Effects & Examples | What is Deflation?

The Functions and Characteristics of Money