The Monroe Doctrine established limits on the reach or influence of the United States and European nations. Explore this document through a definition and summary, understand its purpose, and learn about instances when it has been invoked. Updated: 09/10/2021
Create an account

What Is the Monroe Doctrine?

The Monroe Doctrine is a foreign policy statement that created separate spheres of European and American influence. It was written by President James Monroe and Secretary of State John Quincy Adams, and Monroe delivered it to Congress in his seventh annual congressional speech on December 2, 1823.

Basically, then, the Monroe Doctrine decreed that the United States would handle the affairs of the Western Hemisphere. Essentially, Monroe was telling Europe, 'You keep your nose out of our business, and we'll keep our nose outta yours.' 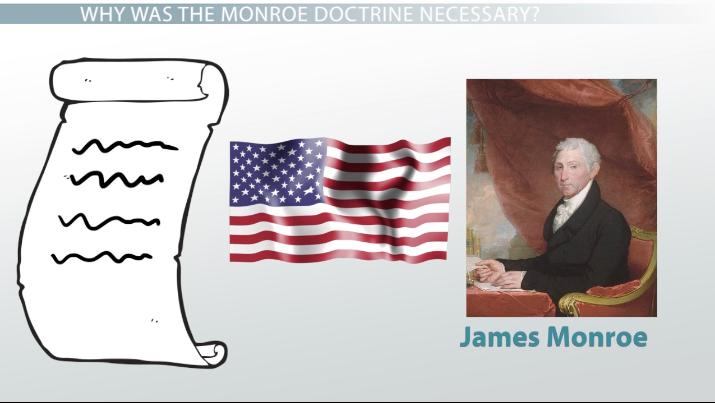 Coming up next: Roosevelt Corollary to the Monroe Doctrine: Definition, Summary & Significance

Why Was the Monroe Doctrine Necessary?

The Napoleonic Wars, which had torn apart Europe and led to the War of 1812 between the United States and Great Britain, had ended a few years before. Monroe could see, however, that some European countries were getting rather restless.

In fact, Prussia, Austria, and Russia had formed the Holy Alliance with the goal of defending the monarchical style of government. Already, the trio had interfered in a conflict in Spain, trying to put an old ruling family back on the throne in spite of the Spanish people's wishes. The United States was concerned that the Alliance might try to extend its influence into the West, a step that would be anything but welcome.

Monroe hesitated about what to do, even asking the advice of former presidents Thomas Jefferson and James Madison. In the end, he decided that, at the very least, he needed to make a strong statement on United States foreign policy, namely, the Monroe Doctrine.

How Was the Monroe Doctrine Applied?

For all practical purposes, the United States didn't have a good way to enforce the Monroe Doctrine. It had a very limited army and navy, and the European countries knew it. In fact, Europe pretty much disregarded the Doctrine. The British Navy helped a bit with enforcement but only when it suited Britain's purposes. Britain also felt free to violate the Monroe Doctrine, as it did in 1829 when it tried to make Texas a British colony.

The Monroe Doctrine got its first real workout in 1845 when President James Polk used it to legitimize America's westward expansion and enter into a territorial war with Mexico. When the French interfered in Mexico in 1862, trying to set up a puppet government controlled by France, the United States protested loudly. Embroiled in the Civil War, however, the U.S. could do nothing but protest until 1865, when it was finally able to send troops to help the Mexicans regain their independence.

President Theodore Roosevelt added his own addition to the Monroe Doctrine in 1904. Roosevelt, a former police commissioner in New York City, decided that the United States should serve as a police force in the Western Hemisphere, monitoring the activities of the Latin American countries and bringing them back into line as necessary. For example, when European creditors began demanding that countries like Haiti, Nicaragua, and Santo Domingo pay their debts, the United States sent in the Marines to keep the Europeans out and protect American interests.

The Monroe Doctrine was called upon again in 1962 during the Cuban Missile Crisis. The Soviet Union began building missile-launching bases in Cuba, making America very nervous. President John F. Kennedy reminded the Soviets that they were not welcome in the Western Hemisphere and set up an air and naval blockade around Cuba. After several tense days, the Soviets withdrew.

The Monroe Doctrine was a foreign policy statement originally set forth in 1823 which created separate spheres of European and American influence. The United States promised to stay out of European business and told the Europeans to stay out of the Western Hemisphere's business.

The impetus for the doctrine came after the Napoleonic Wars, when the United States was concerned that the Holy Alliance (Prussia, Austria, and Russia), might try to extend its influence into the West. The U.S. had a hard time enforcing the doctrine, however, due to limited military power during that time. Britain violated the Monroe Doctrine in 1829 when it tried to make Texas a British colony. The doctrine was put to the test in 1845 when President James Polk used it to legitimize America's westward expansion and enter into a territorial war with Mexico and expel the French.

Over the years, the United States expanded on the Doctrine to claim further territory and to assert the right to monitor and interfere in the affairs of nations in the Western Hemisphere. Theodore Roosevelt used the Monroe Doctrine to justify the use of force in Latin America, and Kennedy later invoked it during the Cuban Missile Crisis to remind the Soviets that they were not welcome in the Western Hemisphere. The Monroe Doctrine ended up far more wide-reaching than James Monroe ever intended.

Watch each section of this lesson on the Monroe Doctrine so that you can subsequently:

James Madison's Presidency: the War of 1812 & the Monroe Doctrine