Dr. Rachel Tustin has a PhD in Education focusing on Educational Technology, a Masters in English, and a BS in Marine Science. She has taught in K-12 for more than 15 years, and higher education for ten years.

Movement education is an early form of physical education emphasizing four main concepts: body, space, effort, and relationships. Learn how this type of education progressed from dance in the 1800s to the complex movement activities and skills used today. Updated: 12/23/2021
Create an account

Depending on where and when you grew up, your experiences in a physical education or PE class could be vastly different compared to others. In certain parts of the country, you may fondly remember learning to play ice hockey as a small child in PE and being excited when you graduated from the tennis ball to a real hockey puck on the ice. Others may remember learning square dancing as an integral part of the PE curriculum. You may even have spent some time learning basic yoga. It is quite possible that your teachers were using these sports to teach you movement education. 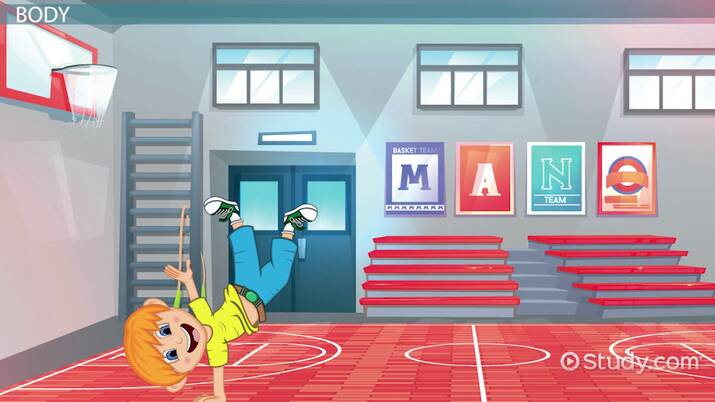 Coming up next: Stretching Exercises for Children

The Body and Movement Education

When teaching students about the body as part of movement education, it's not just about teaching them to name the parts of their body as they would in a biology class. Rather, it is about teaching them a framework for understanding their body in a scientific, especially physics, related manner. Students begin by learning about body shapes or silhouettes, such as round or asymmetrical. However, they also learn about how the different parts of their body play a role in the actual physics of the movements they're performing. If they are doing a cartwheel, they might learn to classify their body parts into those that apply force as part of the movement.

The final category of the body in movement education is whole body actions. These body actions consist of nonlocomotor skills, which are motions performed on a fixed base of support where the body essentially stays in the same position. These actions are based on three primary types of body movements: a stretch, a curl, and a twist. The next category is locomotor skills where the body moves from one place to another. Gallops, skips, and jumps are all examples of locomotor skills. Finally, there are manipulative skill actions, which involve using the body to control an action, such as a racket or a baseball bat. Skills such as catching or dribbling a ball are also manipulative skills.

Space is an important concept in movement education. Teaching students about space in terms of movement education involves teaching directions, such as up and down and left and right. However, space is usually taught to be based on three different planes.

The sagittal plane is the imaginary plane that divides the body into the left and right sides. Movements along this plane are forward and backward, like bowing to your partner or shooting a basketball. The frontal plane divides the body into front and back planes, like the front and back of a sandwich. Movements along the frontal plane are sideways, similar to opening and closing a door. Finally, there is the traverse plane, which involves twisting movements, such as doing a log roll with your body.

When we talk about relationships in movement education, we aren't necessarily talking about your relationship with your PE teacher or even your basketball team. It's about the types of connections that can be formed through body movements. There are the people relationships in movement education, such as moving solo, solo within a group and moving about a group. There are a variety of ways your body can move relative to others within a group. These can include moving over or under a partner, or through a group of children.

There are a variety of activities that you can use to teach nonlocomotor, locomotor, and manipulative skills. For example, a good way to teach nonlocomotor skills is by using stretching exercises, such as yoga, as part of your movement curriculum. Certain dance moves, even simpler ones in square dancing, are nonlocomotor, such as a spin or a turn. Locomotor skills are fun to teach using obstacle courses. Students can use skills, such as a crab walk or a leap, to navigate through different obstacles you can easily set up in a gym or outside on the playground. Any sport that uses a ball can be used to teach manipulative skills, such as throwing a ball through a basketball hoop.

Movements related to timing are also a key part of the relationship framework of movement education. For example, having students practice mirroring each other's movements by facing each other and moving similar to the way mimes play at mirroring one another in a circus. You can also have students practice matching movements, which is what often happens in a dance class when students are trying to move in unison while standing parallel to one another.

There are also relationships in movement, such as moving in different directions relative to others. All of these concepts enhance traditional physical education by building enhanced awareness of how bodies move.