Imagine you are sitting in a rowboat on a still lake. To move across the lake, you must place your oars in the water and pull backwards. At the end of your stroke, you lift the oars out of the water, move them forward and dip them back into the lake for the next stroke. Each movement of the oar propels the boat across the water. 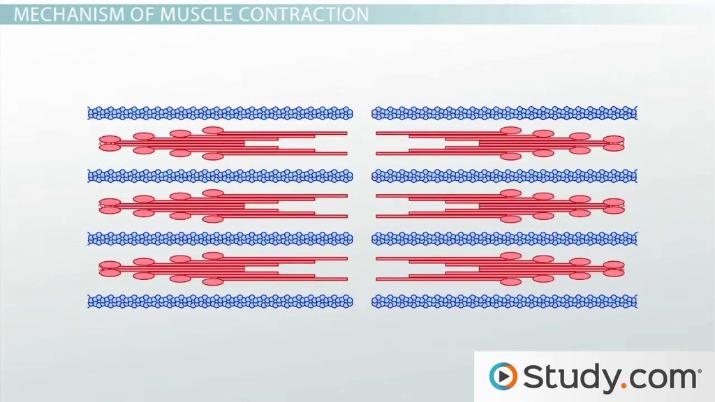 Coming up next: What Is the Muscular System? - Function & How Muscles Work in Groups

Myosin is a motor protein that generates the force in a muscle contraction much like the stroke of an oar. It consists of a head and a tail region. Together, the tails of approximately three hundred myosin molecules form the shaft of the thick filament. The myosin heads of these molecules project outward toward the thin filaments like the oars of a rowboat.

Actin is a spherical protein that forms, among other things, the thin filament in muscle cells. Thin filaments are composed of two long chains of these actin molecules that are twisted around one another. Each actin molecule has a myosin-binding site where a myosin head can bind.

Organization of Myosin and Actin

Let's consider the organization of myosin and actin in skeletal muscle, the muscles responsible for voluntary movements. Skeletal muscle is composed of a repeating structure of myosin and actin fibers. Each myosin thick filament is surrounded by actin thin filaments, and each thin filament is surrounded by thick filaments. Several of these filament bundles make up the functional portion of a muscle cell. It is also important to note that the thin filaments are attached to a very dense protein plate called a Z disc. We'll soon see why this is an important feature of actin structure.

So, how do the thick and thin filaments generate muscle contraction? The attraction between the myosin head and the myosin-binding site of actin are strong enough that the bond can form spontaneously. Once the two proteins are bound, the myosin protein undergoes a conformational change, or a change in protein shape, that 'cocks' the head. Like the oar stroke of a rower, the movement of the myosin head causes the thin filament to move.

The binding between actin and myosin is so strong that the body must use control mechanisms to prevent unwanted muscle contractions. There are two main proteins that regulate actin and myosin interactions: tropomyosin and troponin. Tropomyosin is a long strand that loops around the actin chains in the thin filament. By covering the myosin-binding sites of the actin molecules, tropomyosin prevents muscle contraction.

Troponin is a protein that helps hold tropomyosin in place on the actin filament. For a muscle contraction to occur, troponin and tropomyosin must be moved to reveal the myosin-binding sites. Calcium triggers movement of these proteins. When calcium binds to troponin, the shape of the troponin molecule changes. As the shape of troponin is altered, it pulls tropomyosin away from the myosin-binding sites. Once these sites are open, the myosin heads can attach to the thin filaments and initiate a muscle contraction.

ATP is required to disrupt the myosin-actin interaction and prepare the system for another 'oar stroke.' Repetition of these oar-like myosin strokes constitutes a muscle contraction. Note that the bond between actin and myosin is so strong that it requires an input of energy via ATP to break the bond. This explains why muscles stiffen shortly after death. Without a steady supply of ATP to break the actin-myosin bond, muscles stay contracted in a process known as rigor mortis.

In summary, myosin is a motor protein most notably involved in muscle contraction. Actin is a spherical protein that forms filaments, which are involved in muscle contraction and other important cellular processes. Tropomyosin is a long strand that loops around the actin chains in the thin filament. Troponin is a protein that helps hold tropomyosin in place on the actin filament.

A muscle contraction consists of a series of repeated events. First, calcium triggers a change in the shape of troponin and reveals the myosin-binding sites of actin beneath tropomyosin. Then, the myosin heads bind to actin and cause the actin filaments to slide. Finally, ATP breaks the actin-myosin bond and allows another myosin 'oar stroke' to occur. Repetition of these events causes a muscle to contract.

The History of Animal & Human Evolution

What is a Sarcomere? - Parts & Contraction