Frameshift mutations happen when a protein is drastically changed because of an insertion or a deletion. Review the different types of mutations, the codon reading frame, and how damaging frameshift mutations really are. Updated: 08/18/2021
Create an account

We already know that point mutations can cause changes to an organism. A mutation in DNA alters the mRNA code, which in turn can change what kind of protein is produced. Earlier we saw the effects of base substitutions. We used the example of the pink-winged pony to describe these effects. A missense mutation makes a slight change to a protein, a nonsense mutation blocks a protein's production, and a silent mutation does not affect the protein at all. These three different effects are all caused by base substitutions. They all result from the switching of one base for another. 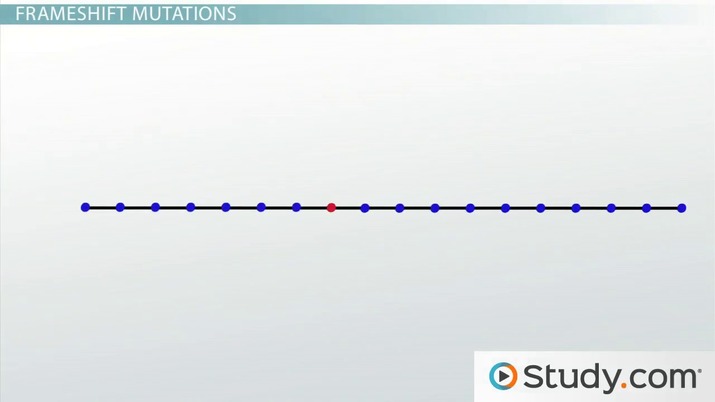 Coming up next: Point Mutations in DNA: Types, Diseases & Examples

We'll first revisit the magikeratin gene that we used in our previous examples. It's an imaginary gene that codes for the magical keratin protein found in the feathers of the pink-winged pony. Below is the original DNA strand. The code is first transcribed into mRNA, and then it's translated into a chain of amino acids. The chain we normally get is methionine, proline, serine, and valine. That sequence makes up our magikeratin protein.

Let's think back to our codons for a minute. Whenever we translate an mRNA code, we read the letters in groups of three. We look at the long strand of bases, draw a few lines, and then hone in on one codon. We keep our focus on that codon while we check the RNA codon chart to find the matching amino acid. In that moment, we sort of have 'tunnel vision' for the codon in question. That 'tunnel vision' is actually called a reading frame. It's a way of dividing the mRNA into codons and focusing on one codon at a time.

The reading frame is something that we as humans use, but the concept is still the same for the molecules that are in charge of genetic translation. Inside our cells, ribosomes and tRNAs are working hard to match amino acids to every codon. They have their own sense of the reading frame, and they build polypeptides accordingly.

So, what would happen if we added a base? The DNA code would grow by one letter, and so would the mRNA code, giving us how many codons? Oh, weird! Below, look what happened to our reading frames! They all got shifted over by one. We still have five codons, but now there's one extra base. And the codons are all very different from the ones we had before. Our reading frames have shifted on the mRNA strand. This all happened because of a single base insertion. The effect that we get is called a frameshift.

A frameshift mutation is a mutation caused by an insertion or deletion, which causes a shift in the translational reading frame. Frameshift mutations have a more dramatic effect on the polypeptide than missense or nonsense mutations. Instead of just changing one amino acid, frameshifts cause a change in all the amino acids in the rest of the gene. Let's take our magikeratin gene for the pink-winged pony and see what results from a frameshift mutation.

Below is the original DNA strand. We'll make an insertion of an adenine base between the Gs. Also below is the resulting mRNA strand, and here's the resulting polypeptide: methionine, leucine, isoleucine, serine, and another leucine. Whoa. That's nothing at all like our magikeratin protein! I don't know what that is, but it's definitely not something that will give normal feathers to our pink-winged pony. If this kind of mutation happened, then the feather proteins would turn out very strange. The magikeratin would be incorrectly synthesized due to a serious defect in the amino acid chain. It'd be a safe bet that this pony couldn't fly at all.

So, we've tried an insertion. What about a deletion? Let's say we deleted the second G from the original DNA strand. Our resulting mRNA would give us the following polypeptide: methionine, histidine, glutamine, and phenylalanine. Once again, it's nothing like our magikeratin polypeptide. If this deletion happened to our pony, we'd get something just as bad as what we got from the insertion.

By now, you can see that frameshifts have a much more dramatic effect than single base substitutions. While base substitutions alter just one amino acid, insertions and deletions can alter giant portions of proteins. The effects of frameshifts are more dramatic when they occur in earlier parts of the gene. For example, if you had a gene made of 23 codons and the frameshift happened at codon 21, then only a small part of the protein would be changed. But, if the frameshift happened at codon number 3, then pretty much all of the protein would be drastically different.

We should mention here that not all insertions and deletions cause a frameshift mutation. If the segment being inserted or deleted is three nucleotides long, then the reading frame still lines up properly with all of the codons. If an insertion or deletion consists of nucleotides numbering a factor of 3, then a frameshift will not occur. It's also important to note that insertions and deletions can cause nonsense mutations. Even though we talked about nonsense mutations arising from base substitutions, we can also get them in cases where an insertion or deletion yields one of the three stop codons. Now, let's look at how frameshift mutations can affect human health.

You may have heard of a disorder called Tay-Sachs disease. Tay-Sachs is often caused by a frameshift mutation in a gene that codes for an important enzyme. Enzymes, remember, are also proteins. The enzyme affected in Tay-Sachs disease is called hexosaminidase A. Its job is to keep harmful chemicals from building up in our nerve cells. With a mutation on the hexosaminidase gene, the enzyme doesn't get built correctly, and harmful chemicals accumulate in the nerves. People with Tay-Sachs may suffer from muscle weakness, seizures, deafness, blindness, or dementia. Tay-Sachs is a serious genetic disease that shows just how damaging a frameshift mutation can be.

Point mutations are small changes that happen to the DNA sequence. They're divided into two groups: base substitutions and insertions and deletions. Base substitutions cause relatively minor mutations, like missense, nonsense, and silent mutations. But, insertions and deletions cause a change in the length of a gene, which causes a shift in the codon reading frame. A frameshift mutation occurs when a protein is drastically altered because of an insertion or a deletion. Tay-Sachs disease is a human disorder caused by a frameshift mutation. In general, the effects of frameshifts are much larger than those of base substitutions.

How An Operon Controls Transcription in a Prokaryotic Cell