Guy de Maupassant is a novelist and short story writer who specializes in surprise, irony, and tragedy. ~'My Uncle Jules~' is no exception. In this lesson, we'll summarize and analyze the events in this short story. Updated: 09/13/2021
Create an account

''My Uncle Jules'' is a frame narrative, which is a story within a story. In Maupassant's tale, the outer frame introduces an unnamed narrator and Joseph Davranche, who gives an old beggar five francs. In Maupassant's lifetime (1850-1893), this was fairly generous. Joseph explains his act by telling the story about his uncle, Jules.

The main narrative is about Joseph's immediate family and his uncle, Jules. His family lives in Le Havre, a coastal town in Normandy, France. The Davranche family is fairly poor, a condition which Joseph's mother passive-aggressively blames on his father. His two adult sisters sew their own clothes, and the family survives on plain, monotonous meals.

Joseph's uncle Jules, whom Joseph has never met, has squandered the Davranche inheritance. However, he's emigrated to New York and written to the family twice, explaining that he's doing well and hopes to return to Le Havre one day. He plans to repay Philippe, Joseph's father, his share of the inheritance, leaving the family to place all their hope in Jules to secure their financial future.

Every Sunday, the family members dress in their best clothes and walk along the docks of Le Havre, watching the steamships come in and hoping to attract marriage prospects for the sisters. Each week, Joseph's father muses how wonderful it would be if Jules happened to be on one of the steamers.

Based on Jules' promise of financial recompense, a young man marries the younger sister, and the Davranche family celebrates by taking a trip on a steamship to nearby Jersey, England. On the way, they observe an ''old, ragged sailor'' selling oysters to passengers as light refreshment. Philippe thinks he resembles Jules, and they soon learn from the captain that, indeed, he is, and that he's been avoiding returning to Le Havre because he owes the family money.

Humiliated and afraid Jules might ask for their help, most of the family make themselves scarce so he won't see and recognize them. However, Joseph approaches his destitute uncle, pays him for the oysters, and gives him ten cents as a tip. His family is outraged, but Joseph pities his uncle, noting that he disappeared afterward ''below to the dirty hold [lower cargo area] which was the home of the poor wretch.'' 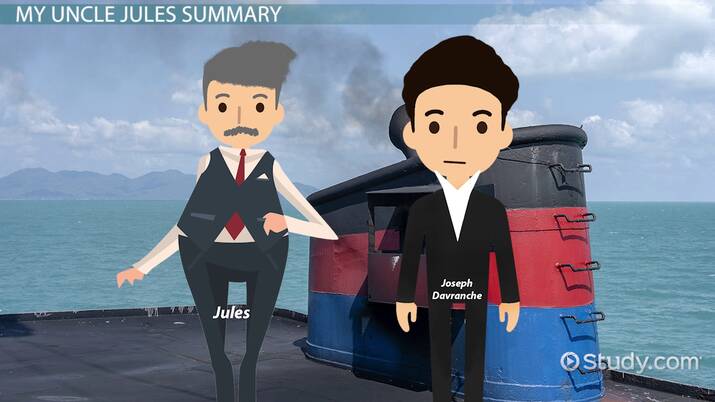 Among other devices, Guy de Maupassant is known for his ironic plot twists, and ''My Uncle Jules'' is no exception in doing this. Remember that an outcome directly opposite of the one expected is what we mean by ironic. The main irony of the story is that the Davranche family consider themselves very badly off financially, and are counting on Jules, whom they've been led to believe has gone from broke to successful, to improve their lives. The husband of the younger Davranche sister is counting on this, too; it's the reason he proposed.

However, Jules turns out to be little more than a beggar peddling snacks and is clearly much worse off than they are. Further, while they've looked forward to seeing him for so many years, they consider it a ''catastrophe'' when they finally do. Jules is destitute not only financially but emotionally as well. Whereas the other Davranche family members have each other, he is alone in the world, marginalized by his rock-bottom social status and fear of facing his own family.

The Davranche family might have each other, but to add to the story's irony, we find them tearing one another down. Joseph's mother is the most destructive. She not only blames the hard-working Philippe for their money troubles she also blames him for Jules' failure in the first place and continuously finds opportunities to bring this to his attention. On the ship, she denies Joseph the pleasure of having any oysters, berates him for giving Jules a tip, and rebukes Philippe for failing to eat them gracefully. She isn't the only one, however. Instead of cherishing the daughters and sisters, other members of the family view them largely as financial burdens. Joseph notes that his sisters ''were not yet married, and that was a great grief to every one.''

We've learned that ''My Uncle Jules'' is a frame narrative, or a story within a story. Joseph Davranche tells an unnamed narrator a story about his immediate family, who are poor, and their relationship with his uncle, Jules. Uncle Jules, who had once lost the family inheritance, had supposedly emigrated to New York, become successful, and was planning to return to Le Havre and repay Philippe (Joseph's father) his share of the wealth, something the family is counting on. As it turns out, the family discover Jules destitute, living on a steamship, selling oysters to passengers.

We've also learned the two major ways the author used irony in the story (meaning an outcome directly opposite of the one expected). First, the Davranche family lament their financial straits and consider themselves to be utterly lost until Jules can redeem himself. Yet they ultimately discover that Jules, broke and alone, is far worse off than they are. Second, while family members are proud to have each other, ironically, they often tear one another down. At each moment in the story, the family seems to be almost as miserable as Jules.

A Cup Of Tea by Katherine Mansfield: Summary & Theme

Of Mice and Men by John Steinbeck | Summary & Analysis

Athena in The Odyssey

A Vendetta by Maupassant: Setting & Summary