Copyright
Lesson Transcript
Instructor: Ryan Hultzman
There are many different fibers and filaments that help cells and organisms move, walk, talk, breathe, etc. One of these filaments is called myosin. Watch the video lesson to find out what myosin is, how it works and its structure.
Create an account

Where Is Myosin Found?

In both eukaryotic cells, cells that have membrane-bound organelles and a nucleus, and prokaryotic cells, cells that lack a nucleus and membrane-bound organelles, we can find myosin. It exists as a filament inside of the cell. It is responsible for a number of interactions, such as movement and contractions of muscles. Again, myosin can be found in most every kind of cell; it is not specific to a certain kingdom, like plants or animals, or type of cell. 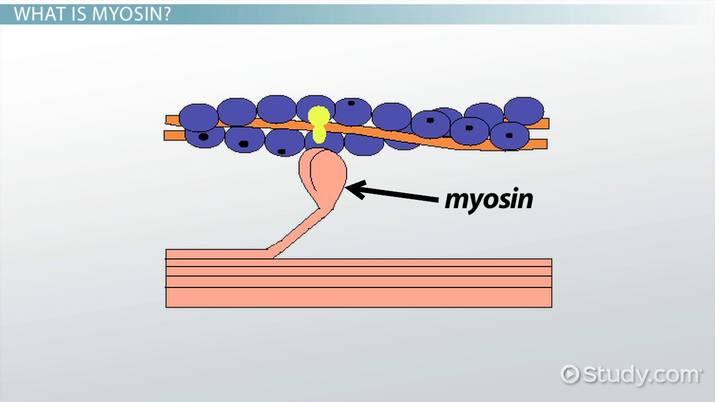 Coming up next: Pinocytosis: Definition & Examples

Myosin is a motor molecule that works to move the cell. This will result in a contraction and expansion movement. It works closely with a globular protein called actin that polymerizes to create actin filaments. Myosin is a special protein that converts adenosine triphosphate (ATP), a molecule that cells use in order to live and work, into mechanical energy (energy for work). This will then generate force and movement.

So how does this all work? As stated, myosin is closely connected with actin filaments. The actin are arranged parallel to one another with myosin, a thicker filament, interspersed between them. The myosin will literally walk along the actin, creating a contraction when the myosin and actin slide past one another. Sound confusing? Think about when you bend your finger or arm. By moving your arm, you are causing the thicker myosin to slide past the thinner actin, creating a contraction. The myosin and actin work together to move the skeletal muscle. These movements are also responsible for cleaving a cell in two during cell division.

Each myosin molecule has a head, neck and tail domain. What this means is that there are three separate regions that would constitute a head, neck and tail within myosin. In the head region, the myosin binds to the actin filament and begins the walk along it. In the neck domain, certain other molecules, called myosin light chains, can bind to the myosin. These can help interact with the protein, generating a lever-action type of power stroke force. Finally, in the tail domain, other myosin and different cargo materials (i.e., other myosin fibers or binding sites) may attach. This also allows the myosin to attach to other myosin molecules.

Let's review what we've learned about the function and structure of myosin.

Tropomyosin Function | What is the Role of Tropomyosin in a Skeleton?

Difference Between Laws and Customs

Bones of the Pelvis | Anatomy and Function

What is a Sarcomere? - Parts & Contraction