Trenton has a master's degree in global history and has developed college Asian history courses.

The Greek myth of Theseus is about a hero who defeats the Minotaur, a monster with a bull's head and a man's body. Explore a summary of this myth and learn about the Greek hero Theseus and his many adventures. Updated: 09/14/2021
Create an account

Theseus was a hero of Greek mythology associated with the city-state of Athens, and best known for slaying the Minotaur. Theseus was also the leader who unified the Greek region of Attica under a single ruler, which paved the way for the development of democratic principles in Athens.

Theseus' father was Aegeus, king of Athens, and his mother was Aethra, daughter of the king of Troezen. King Aegeus had no children and no heir, and so he traveled to the Delphic Oracle to seek counsel. On the journey home, he stopped to visit King Pittheus of Troezen and became drunk. Pittheus offered his daughter to Aegeus, and she became pregnant.

Aegeus resumed his journey, but left Aethra with her father in Troezen. He instructed her to send their child, if it was a boy, to Athens when he reached a certain age. As the story goes, Aegeus left a sword and sandals under a very heavy rock. If their son was able to retrieve the sword and sandals, he would be recognized as Aegeus' heir upon arrival in Athens.

When Theseus reached the age of a young man, his mother shared Aegeus' instructions with the boy. Theseus successfully moved the boulder and claimed the sword and sandals of Aegeus. He then set out for Athens, encountering outlaws and monsters along the way. By defeating these obstacles and many more over the course of his life, Theseus became a Greek hero. 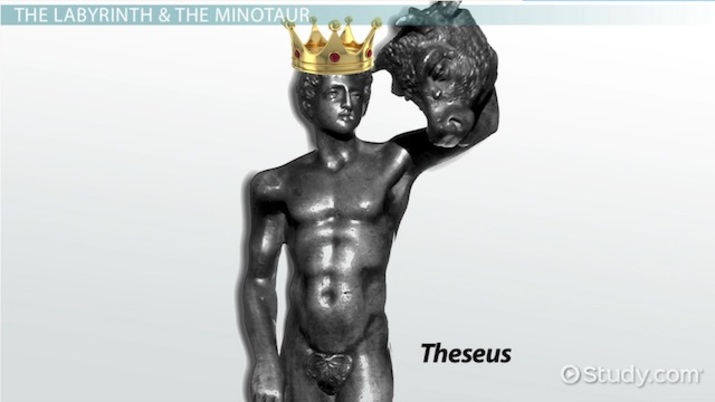 Coming up next: Pericles of Athens: Facts, Achievements & Death

On the way to Athens but near Corinth, Theseus fought and killed Pityocamptes, whose name means 'pine bender.' Pityocamptes tied his victims to two different pine trees bent to the ground and then released the trees, tearing the victims to pieces. Theseus also killed Sciron, an outlaw who pushed unsuspecting travelers off a cliff to be eaten by a giant turtle, by giving him a taste of his own medicine.

After arriving in Athens, Theseus sought out the king. However, he was quickly recognized by Queen Medea, who wanted her own son to be the heir to the throne and convinced the king to send Theseus on a heroic mission. Aegeus asked Theseus to capture the Marathon bull, a bull captured initially by Heracles and brought to Attica. Theseus succeeded in his mission, putting a stop to the bull's terrorizing of the countryside around Marathon.

However, Medea manipulated Aegeus into thinking Theseus was a threat, and they plotted to kill him by poison. Aegeus held a banquet in honor of Theseus' victory over the Marathon bull, and during the banquet, Medea dropped the poison in Theseus' drink. Just as Theseus was about to drink the poison, Aegeus recognized the sword and sandals and realized Theseus was his rightful heir. Aegeus knocked the poisoned cup out of Theseus' hands and proclaimed him his heir. Medea and her children were then banished from Athens.

The Labyrinth & the Minotaur

Athens was a tribute state to Crete under the leadership of King Minos, who demanded a tribute of seven boys and seven girls each year to feed his Minotaur. The Minotaur was a monster with the body of a man and the head of a bull housed within a great labyrinth. Theseus volunteered to be one of the tributes and King Aegeus reluctantly agreed. However, he asked that on the return home, if Theseus was successful, that he fly white sails, but if not, to fly black sails.

Upon arriving in Crete, Ariadne, the daughter of King Minos, fell in love with Theseus and agreed to help him kill the Minotaur if he agreed to take her with him when he left. She then gave him a length of string which he tied to the doors of the labyrinth and let out behind him as he searched for the Minotaur, which he found in the center of the labyrinth. Theseus then fought and killed the beast!

Afterwards, he traced his path back to the doors of the labyrinth using the string. Theseus then set sail with Ariadne and all of the tributes. However, Theseus was not in love with Ariadne: on a stopover in Naxos, she fell asleep on the beach, and he left her there.

Returning to Athens, Theseus failed to change the sails per Aegeus' instructions and sailed into port flying a black sail. Stricken with grief over the perceived loss of Theseus, Aegeus threw himself off a cliff. With the death of Aegeus, Theseus became king of Athens and set to uniting the smaller villages in the countryside surrounding the city.

The Amazons & the Underworld

The exploits of Theseus as a hero continued after becoming the ruler of Attica. Theseus fought with Heracles against the Amazons, a race of warrior women, and defeated their army. As spoils of war, Theseus took the Amazon warrior Antiope as his wife. Together they had a son, Hippolytus. Theseus would once again defeat the Amazons when they later invaded Attica; this second victory was recorded upon the Parthenon. Unfortunately, Antiope would die in the battle.

Another victory of Theseus is also recorded upon the Parthenon. While attending the wedding of King Pirithous of Thrace, the wedding party was attacked by centaurs. Theseus helped to defeat the band of centaurs by killing Eurytus, the fiercest warrior of the centaurs.

Afterwards, Theseus and Pirithous became determined to wed daughters of Zeus. Theseus chose Helen—the most beautiful woman in the world and the cause of the Trojan War—and Pirithous chose Persephone—the wife of the god Hades. The two friends traveled to the Underworld where they accepted the hospitality of Hades. Sitting down to a table, the two friends were entwined by snakes and held fast. Theseus was eventually freed by Heracles, but Pirithous remained in the Underworld forever.

Theseus returned to Athens after his incarceration in the Underworld to find the city in rebellion. He was unable to defeat the rebels who were led by Menestheus, a descendant of a previous king of Athens. As a result, Theseus was banished from Athens. In his wanderings, he sailed to the island of Scyros where he was thrown off a cliff and killed by King Lycomedes.

Theseus was a hero of Greek mythology associated with the city-state of Athens and best known for slaying the Minotaur. His father was Aegeus, king of Athens, and his mother was Aethra, daughter of the king of Troezen. Theseus made a name for himself by slaying the cruel Pityocamptes and the outlaw Sciron.

After arriving in Athens, he was asked to capture the Marathon bull, a bull captured initially by Heracles and brought to Attica, and was able to prove himself the rightful heir to the throne, despite the manipulations of Medea, the jealous queen of Athens. Theseus then freed Athens from being a tribute state to King Minos by slaying the Minotaur, a monster with the body of a man and the head of a bull, and conquering the great labyrinth it was housed in with the help of Ariadne, the daughter of King Minos.

Upon returning home to Athens, Theseus became king, but his heroic exploits continued. He fought with Heracles against the Amazons, a race of warrior women, defeating their army twice, which was recorded on the Parthenon, and taking the Amazon warrior Antiope as his wife, who bore him a son, Hippolytus, but she died in the second battle with the Amazons. Theseus also helped defeat a band of centaurs who attacked the wedding of King Pirithous by killing Eurytus, the fiercest warrior of the centaurs.

Theseus and Pirithous then became determined to wed daughters of Zeus. Theseus chose Helen—the most beautiful woman in the world and the cause of the Trojan War—and Pirithous chose Persephone—the wife of the god Hades. However, when they traveled to the Underworld they were imprisoned, though Theseus was eventually freed by Heracles. Upon returning to Athens, Theseus found the city in rebellion, but he was unable to defeat the rebels, and was banished. In his subsequent wanderings, he was thrown off a cliff and killed by King Lycomedes on the island of Scyros.

What Is the Trojan War? - Summary, Facts & Heroes

Queen Hatshepsut & Ramses the Great | Who Were Ramses and Hatshepsut of Egypt?

Ajax The Great & The Trojan War | Who Was Ajax in Greek Mythology?

Odysseus Story & Journey | Who Is Odysseus?

Fate in The Iliad by Homer | Quotes & Analysis