Damien has a master's degree in physics and has taught physics lab to college students.

Discover what exactly is meant by the term 'nano'. Then learn exactly how small nanometer-sized objects are and some examples of what exists at that size scale, both naturally and artificially created. Updated: 11/26/2019
Create an account

The Meaning of Nano

People have been throwing around the prefix 'nano' for a while not knowing what it really means. You can probably trace this phenomenon back to the first release of the iPod nano and the incredible success it had. As more products came out using the prefix nano, people came to associate it with anything small. However nano isn't just a synonym for small. It has a very specific size associated with it. Nano is a metric prefix that stands for one billionth. In the sciences, you most often see the prefix associated with meters, or nanometers. A nanometer is a unit measuring one billionth of a meter in length. In the international system of units, more commonly referred to as SI units, the nanometer is represented by the symbol 'nm.' In scientific notation, one nanometer can be written as 1 x 10^-9 meters. 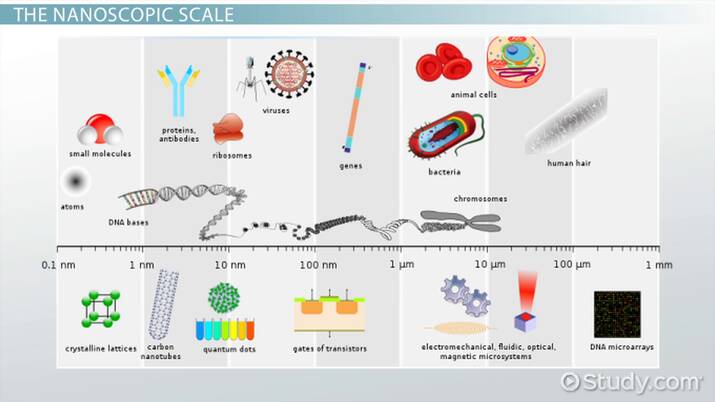 Coming up next: Natural Laws of Science: Definition & Examples

Now that you know that a nanometer is one billionth of a meter, you probably still don't have a good idea of exactly how small that is. A billionth of anything is a hard concept to try and visualize. We can use a couple of examples using objects you might be familiar with to get a better grasp on the size of a nanometer.

Let's imagine we're making a scale model, and in our scale model we have a marble. The diameter of that marble represents a single nanometer. We also want to have another sphere that represents a meter in diameter so we can visually compare the two. Unfortunately, our scale model is going to be quite hard to build, because if the diameter of a marble represents one nanometer, the sphere that represents one meter would have to be the size of the earth. If you're having a little trouble visualizing this because you aren't familiar with meters and the metric system, let's instead quickly look at an inch on a standard ruler. Inside every inch on a ruler there are 15 little markings that break it down from 1/16th an inch all the way through 15/16ths an inch. Say instead of breaking the inch measurements into 16ths we wanted to break it down into nanometers. Then instead of 15 markings on the inside of that inch measurement you would need about 25.4 million markings.

One might think that at such a small scale we couldn't artificially create any structures, but guess what? We have! There is a whole field growing around building, studying, and developing uses for objects on the nanoscopic scale called nanotechnology. Two examples of nanoscopic objects created by those working in this field are nanowires and carbon nanotubes. Nanowires, much like their name implies, are extremely tiny wires with diameters that fall on the nanoscopic scale in size. Compared to nanowires, a carbon nanotube is a more complicated structure. It consists of carbon atoms creating a hollow tube while joined together in a hexagonal configuration. The standard way to try and visualize this is to imagine a single sheet of carbon atoms in a hexagonal configuration. Then take that sheet, like a single sheet of paper, and roll it up to form a tube.

The small sizes of objects like nanowires and nanotubes give them unique optical and electrical characteristics that could be of use in electronics, optics, energy conservation, etc. Nanotechnology is a relatively young field, and the properties and uses for the objects created in it are still being studied and developed, so we'll just have to wait and see where this takes us!

How to Convert Liters to Gallons

What is Animal Classification?