Kelly earned her Master of Mass Communication from Arizona State and has taught consumer behavior and communication courses at the undergraduate level.

Meet my great uncle, Jeb. Jeb loves to tell a good story. In fact, his stories are often so good they seem a little too good to be true, if you know what I mean. Take for instance his tale of deep-sea fishing in the Gulf of Mexico. Just before a tropical storm hit, he single-handedly caught the largest red snapper ever seen. But, compelled by kindness, he released it back into the ocean before he thought to take a picture. And then was the time he was asked by NASA to join a team mission to Jupiter...

Turns out, while Jeb's stories may not be the most accurate, they are certainly engaging, which is one of the most important qualities of storytelling, or creating a narrative. Simply put, telling a story is narrating. A narrative essay gives an account of something for your reader. Do you remember your first day of school? What about the first time you rode a bike? If someone asked you to tell him or her about these things you'd be creating a verbal narrative essay. 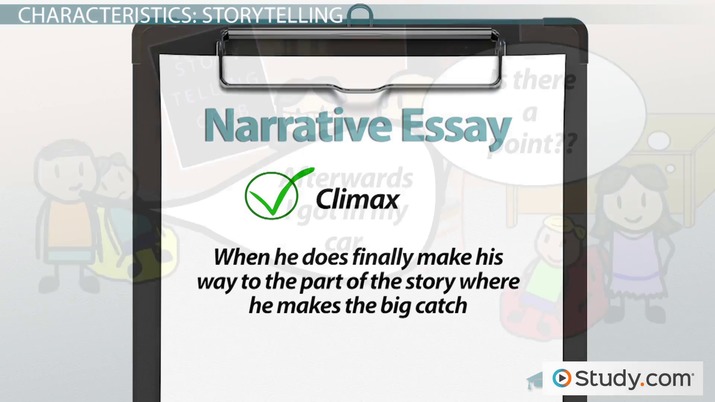 Ever heard the saying, there are three sides to every story: yours, mine, and the truth? In a narrative essay you are sharing your side of the story. Because you are telling the story as you see it, sometimes it can be persuasive, like that time you promised the police officer you didn't slow down for the school zone because you simply couldn't see the flashing sign since it was covered by Mrs. Jones' oleanders. It's your side of the story, and you are trying to convince the police officer to see it from your perspective, thus being persuasive and saving you a potentially expensive ticket.

Have you ever had a friend stop to tell you a story where they start setting up all of these details and going on and on, and you're just sitting, waiting, knowing that surely there will be a point, and it never comes? That's something you don't want to happen in a narrative essay. If a narrative is not being persuasive, part of the mission is at least to get you to appreciate the value of the story. There needs to be a point.

As we've discussed, a narrative essay is essentially storytelling. This means the characteristics that make for an engaging story usually make for a good narrative essay as well. Why, even when we're not sure Uncle Jeb is telling the truth, will we still sit for hours to listen about his fishing expedition or trip to Jupiter?

Telling a good story goes beyond just having a beginning, middle, and end. Closely related to having a point, there needs to be a plot that is developed and carried out through the narrative. Basically, a plot is all of the major events of a story working together to give it a point.

One reason we sit and listen to Uncle Jeb as he describes the stormy waters in the Gulf before he caught the red snapper is because we know it's building up to the main idea of his story. It's probably somehow related to the big catch he'll get to soon.

When he does finally make his way to the part of the story where he makes the big catch, that's another essential part of the narrative essay: the climax. Much like your rambling friend, a story or narrative essay without a climax leaves you unsure of the point. The climax is where it all comes together; it's the most important piece of the story and often the most intense and exciting.

Another key element to storytelling is pacing. Think about most action movies you've seen. As they get to really eventful or important parts, you'll notice things start to slow down, sometimes even moving in slow motion. For Uncle Jeb, he'll probably spend a good five minutes telling you all about his big catch, describing the struggle with the line, hoisting the fish into the boat, how it flipped and flopped around on the deck, and so on.

On the other hand, details that aren't as key to the plot move faster. While talking about driving to the marina, getting the boat ready to set sail, and the ride out to his favorite fishing spot, he might just spend a minute or less. While these details help round out the story, they aren't as essential to the plot or climax.

Choosing to spend five minutes, or in an essay, five paragraphs, on one part of the story and one minute on another is exactly what pacing is all about. A good story spends time emphasizing important details, while including, but not necessarily lingering on, less important ones.

Finally, all of these things aren't nearly as effective, or even useful at all, without clear organization. Most often, narrative essays are told in chronological order. We've all walked into a conversation at a point where things didn't really make sense because we missed the beginning.

This is why Uncle Jeb starts out by telling you about stopping for fried chicken for lunch at sea and getting caught in the storm before telling you about catching the giant red snapper using a piece of that chicken as bait when his lures were tossed overboard because of the storm. Otherwise it wouldn't make any sense. Where would the chicken have come from? Why would he not just use regular lures or worms? Not only does telling the story in chronological order make more sense, it works with the plot and helps to build up to the climax.

Although chronological order is typically the best way to organize your narrative essay, there are other ways to tell your story. You might open with a scene from the end of your story before coming back to the beginning to explain how it all happened, flashback style. However you put it together, the most important idea here is to organize your thoughts in some type of logical order that will help your reader follow your narrative.

Because narrating is storytelling, it's vital to include all of the key parts of a story, too. A plot includes all of the major events of a story that work together to give it a point. These events usually lead up to the climax, or the most important part of the story.

Pacing and organization are key to making all of these elements work. As a writer, you should devote more time and detail to key parts of the story, and tell the story in an order that makes the most sense to your reader - usually chronologically.

Janet's narrative leads up to the most important moment of her story, when she first saw the face of her newborn child. This type of moment in a narrative is known as the _____.

How to Organize an Essay

How to Write a Short Story

Novella vs. Novel | Types of Fiction