National income accounting is a standard metric used by economists to calculate gross domestic product (GDP), the standard measure of a country's economy. Compare the expenditure and income approaches, noting the types of income each focuses on in calculations. Updated: 02/24/2022
Create an account

What Is National Income Accounting? 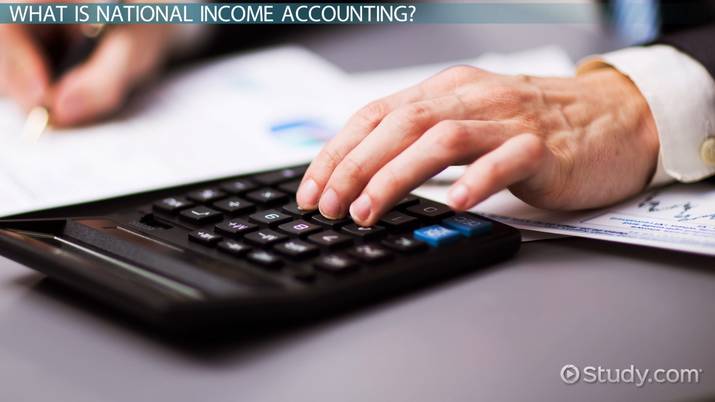 Coming up next: Types of Financial Assets: Money, Stocks & Bonds

So what is GDP? Gross domestic product (or GDP) is how economists measure the size of a country's economy. Really, it can be used to calculate the economic size of any geographic region - a city, a state, a continent, etc. But, most of the time, you'll hear it as the metric cited to describe how big a country's economy is, or how much it is (or isn't) growing. According to the Bureau of Economic Analysis, at the end of 2020, the United States had a GDP of about $21.4 trillion.

There are actually two ways to calculate GDP using national income accounting. They end up producing the same number, and as we discuss the algebra behind them, you should be able to see why. But, sometimes, one makes more sense than the other, so we'll present both the expenditure approach and the income approach.

One way we could calculate GDP is using the expenditure approach. This takes into account four different types of expenditures. First, personal consumption expenditure. This is everything individuals in the economy buy. Remember, we are getting to GDP - the amount of goods and services produced - and if your or I purchase a good or service, that means it was produced, so we include it in our count.

The next is all government purchases. Just like you and I, the government needs to purchase. It may not be the same stuff we purchase - but whether it's new tanks and fighter jets from Boeing or power to keep the lights on in the White House, the government is purchasing goods and services produced in the economy.

The third expenditure is all the stuff produced in the United States but sold to individuals outside the United States. Those exports were produced in our economy but ended up outside of the country, so we need to count them. However, we only want to include net exports, so we take all exports and then subtract imports, meaning the things we all purchased from other countries. Yes, we spent money on it - but it wasn't produced in our country, so it's not part of our GDP. For the expenditure side, we only want to count net exports: all exports minus imports.

Finally, the last expenditure we need to add in is gross private domestic investment. The term 'investment' means we are talking about large purchases - capital items, such as new buildings, machines, and equipment. This category also includes changes in inventory, since a decrease in inventory means a company produced something in a previous period (or year) but sold it this year. Since we are using the expenditure method, it doesn't matter when the good was produced, it matters when the buyer spent money on the purchase.

Adding those four categories together - net exports, gross private domestic investment, government purchases, and personal consumption - we get a very large sum. In 2020, for the United States, it was right about $21.4 trillion.

When you think back about the four categories of expenditures that we summed in order to get GDP, each of those transactions included payment to someone, usually a company. If we added up all of that income, we should get that same number - which we do.

Of course, the problem with simply adding up all the sales of all U.S. companies is that we don't know which of those sales went outside the country. We also don't know which goods and services were purchased for resale, and we don't want to count anything twice. So, we have to strip down the production costs of everything that was added together in the expenditure approach, and then add them together. Explaining exactly how we go from the purchase of a final product to one of the following four categories is tough - and beyond the scope of this lesson - but let's set forth what these four categories are so you can think about it.

We start with labor income, including the costs of fringe benefits like insurance and retirement, and taxes such as unemployment and social security. To that, we add rental income. While this does, obviously, include rental income to landlords, it also includes royalties from patents and copyrights.

We have to be really careful with interest income. We do want to count interest that is income to families and businesses, but we don't want to include income payments made by individuals, companies, or the government.

Finally, we top it off by adding in the largest component of the income approach - the accounting profits of all firms. This is all the profit made on all the sales that any company made to individuals, or other companies, within the same country.

After adding all of those sources of income together, we have our GDP - the same number we calculated with the expenditure approach - but by taking a different path, the income approach.

GDP is an important metric for economists to measure and as long as you want a job or are interested in the price of things like gas, homes, and other necessary goods, you should be interested in it as well. In this lesson, we presented the two ways to calculate GDP - the expenditure and income approaches, which are essentially two sides of the same coin.

The expenditure approach was calculated by adding together personal consumption, government expenditures, exports, and gross private domestic investments. The income approach summed labor income, rental income, interest income, and corporate profits. While each equation takes a different approach, they both result in the same number - GDP.

Price Elasticity of Demand in Microeconomics

The Multiplier Effect and the Simple Spending Multiplier: Definition and Examples