Ecosystems are often forced to change in response to natural and human disturbances. In this lesson, we'll explore how these changes can be negative and positive.
Create an account

Balance in an Ecosystem

Imagine you purchase an aquarium and fill it with some sand, a few aquatic plants, and some small rocks. Add water and a couple of fish to the aquarium and voila! Your miniature ecosystem is complete.

An ecosystem consists of the living and non-living things that interact with one another in a particular location. In the example above, the fish and plants both live in the water, plants provide oxygen for the fish and rocks provide them with shelter, and the fish nibble at the plants and prevent overgrowth. All of the elements of the ecosystem you have created are in harmony. When this type of stability exists in an ecosystem, we call it a balanced ecosystem.

Unfortunately, ecosystems do not always remain in balance. Environmental changes can alter the stability of an ecosystem, creating unbalanced ecosystems. This may be helpful to an ecosystem in some instances, but it also can be destructive. Think of how the ecosystem in your aquarium benefits when you clean the water. Now imagine how your aquarium's ecosystem might suffer if all of the plants were to die. 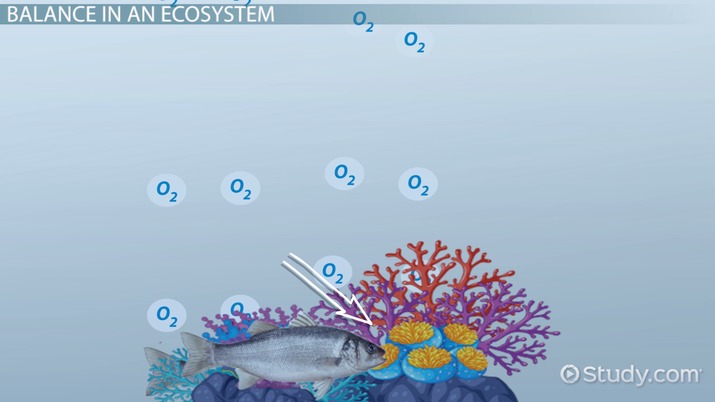 Coming up next: What is a Food Web? - Definition & Explanation

Let's say you go on vacation for a week and leave your aquarium. While you are gone, a blizzard hits and your house loses power and heat for the week. Temperatures drop to near freezing inside your home for a number of days. Your aquarium is small, so the effect of the cold is similar to long-term freezing in a larger ecosystem. The water temperature falls below the temperature the fish needed to survive, and when you return home, all of the fish in the aquarium have died.

Natural disturbances can do a lot of damage to an ecosystem, even killing plants or animals, as in the aquarium example. But natural disturbances are nothing new, and the effects are usually temporary and the ecosystem will eventually recover. It may be the same after it recovers, or it may include new plants and animals that balance out the ecosystem as it adjusts to the new environmental conditions. It may be hard to imagine ecosystems recovering after some natural events. For example, if you've ever stood among charred trees and blackened ground after a forest fire, you know that fires and other natural disturbances can do a tremendous amount of damage.

However, in some cases, natural disturbances can be beneficial to an ecosystem. There are even some ecosystems that have adapted to become dependent on natural disturbances to maintain their balance. For example, longleaf pine forests depend on occasional fires to control undergrowth in the forest. Without a forest fire clearing the way for new seedlings to grow, the tiny new trees are unable to compete with the thick brush and die.

Think of your aquarium again. When your five-year-old cousin came to visit, he really liked feeding the fish and watching them eat. Unfortunately, he kept dumping fish food in the aquarium over and over again. This caused the water to turn cloudy, and the fish had a hard time filtering the water through their gills to breathe. Luckily you were able to put clean water back into the aquarium as soon as your cousin left and the fish survived.

Just like your cousin's presence had an effect on your aquarium and put stress on the fish, human presence has had a significant effect on the world's ecosystems. As we use chemicals, remove trees, move water, and change the landscape to fit our needs, we affect ecosystems. We may introduce non-native species that disrupt an ecosystem or pollute the air and cause climate change. Most human impact is negative because it places undue pressure on ecosystems to adapt.