Did you ever watch one of those animal documentaries where you see how animals behave in their natural environment? I saw one once about tigers in India. This tiger was stalking a deer in a forest. There were monkeys in the trees that were howling, which I guess they do to alert the deer that a tiger's coming. But the deer got stuck in some brush. And, well, it didn't end well for the deer. 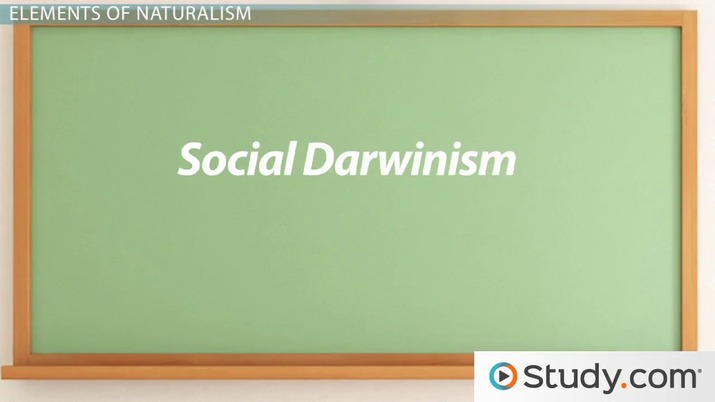 Coming up next: Modernism in American Literature

Now imagine this kind of documentary where it's not a deer but a human. That's the essence of naturalism, a literary movement from the late 19th and early 20th centuries. I don't mean that people are getting eaten by tigers in these stories (at least, not normally), but they are analyzed like animals in a documentary.

One of the pioneers of the movement, French author Emile Zola, summed it up well with the title of his 1890 novel, The Human Beast. In naturalism, humans are analyzed like any other beast. Before we dive deeper into what defines naturalism as a movement, let's touch on some of the major writers and works. In addition to Zola, many American authors wrote amazing naturalistic novels and stories.

There's Stephen Crane. His 1893 work, Maggie: A Girl of the Streets, is considered the first American naturalistic novel. The Red Badge of Courage, a short novel from 1895, is a fascinating story of a Civil War soldier who deserts his unit. Crane's short stories include 'The Open Boat,' about a group of shipwreck survivors on, yep, an open boat.

There's Jack London, too. He published the novel The Call of the Wild in 1903. This story is told from the point of view of a sled dog in Alaska. He also wrote the fantastic short story 'To Build a Fire.' This is a gripping tale of a man desperately trying to survive while stuck in the Alaskan wilderness.

Then there's Edith Wharton. Her 1911 novel, Ethan Frome, is about a bleak New England town in winter. Wait, isn't that redundant? Maybe.

Speaking of bleak, Theodore Dreiser! Seriously, though, his 1925 novel, An American Tragedy, involves a guy who gets his poor girlfriend pregnant, then realizes he has a shot with a rich girl. So he drowns his pregnant girlfriend in a lake - and he's our protagonist. Dreiser also wrote Sister Carrie, which teaches the lesson that a pretty young girl can go further by having sex with rich men than by working in a factory. But that eventually stops working, and things get dark.

Speaking of dark, there's Frank Norris and his 1899 novel McTeague. Did you ever watch Breaking Bad? That show about the high school teacher who ends up as a meth kingpin? McTeague is sort of like that, only with a dentist and none of that successful period in the middle - just the harrowing stuff.

You might have noticed a trend here. That gets us to exploring the elements of naturalism in more detail. Naturalism emerged shortly after realism. The two styles have a few things in common. Both strive to depict the world in an honest, straightforward fashion during a period covering roughly the 1880s through to World War II. You had romanticism before then, full of symbolism, supernatural elements and high emotion. Both naturalism and realism stripped all that artifice away to get at the real world.

Stephen Crane's The Red Badge of Courage, for example, is a brutally honest portrait of a gruesome war. One of its most haunting passages involves the young soldier coming across a decaying corpse. This is what real war is like - death and decay.

Naturalism was also influenced by the work of Charles Darwin. Social Darwinism, or the survival of the fittest, was a new concept in the late 1800s. Naturalists focused on how class and heredity aren't just obstacles to be overcome but inescapable barriers to our success.

Think about any Charles Dickens novel. These are from the Victorian era, which also preceded naturalism. What happens to Oliver Twist? Born with nothing, he lives happily ever after in the end. In a naturalist story, he'd never escape poverty. He might not even survive the orphanage. In Theodore Dreiser's Sister Carrie, the girl makes it big, but then falls hard - she can't change who she is: a poor, country girl.

If class doesn't get you, nature will. In naturalist works, nature is indifferent to humanity. Consider Jack London's 'To Build a Fire.' What does the freezing man need to do to survive when he's stuck in the Alaskan winter? Build a fire. It's right there in the title. Does nature help him out? No, not at all. He falls through some ice. Now he's wet and freezing. Then he gets a fire going under a tree. But snow falls from the tree and the fire is gone. It keeps going like that.

You may be wondering, 'Why are these writers such jerks to their characters?' Think about what they're trying to do. They want to expose the world as it really is. People don't really win the lottery and then have awesome lives. When you end up in a lifeboat, as in Crane's 'The Open Boat,' there isn't a helpful dolphin like Flipper to save you.

Naturalists took a journalistic approach to fiction. In fact, Dreiser based An American Tragedy, the one about the drowned pregnant woman, on a real event. Like journalists, naturalists emphasized capturing the world as a documentarian, using objectivity over subjectivity.

So that's what you'll find in naturalism. What about what's missing? One of the most unusual aspects of naturalist fiction is the lack of authorial commentary. This stems from that journalistic approach. The author is reporting on the events, not commenting on them. There isn't an overt sense that the author thinks what's happening is good or bad. It just is.

This means that overt symbolism is uncommon. Spring isn't a time for rebirth while winter is a time for death. It's just spring or winter.

As we see characters go through whatever season it may happen to be, there's a noticeable lack of free will. This determinism is based on the belief that we're powerless to change the circumstances of our lives. Think about The Count of Monte Cristo, where the guy is wrongfully imprisoned, escapes, builds a fortune and goes on a revenge spree. That's not naturalism. In a naturalistic version of the story, the book would end with him rotting in jail.

Finally, all this adds up to a lack of happy endings. The hero doesn't triumph against all odds. The couple doesn't get together in the end. More often than not, these stories have dark endings. As in life, the story often ends with death.

Naturalism was a literary movement in the late 1800s and early 1900s. Related to realism, naturalism was a reaction against romanticism and Victorian literature.

Its major characteristics include an emphasis on social Darwinism and the inescapability of heredity and class. Rather than happy endings, nature's cruel indifference often triumphs in the end. Naturalistic authors wrote in a journalistic, objective style, eschewing overt symbolism.

Major naturalist authors include Stephen Crane, Theodore Dreiser, Jack London, Frank Norris and Edith Wharton. Among the most significant works in this style are Crane's The Red Badge of Courage, Dreiser's Sister Carrie and London's 'To Build a Fire.'

Finishing this lesson could prepare you to:

E.A. Robinson and the Shift in Modernist Poetry Style

Surrealism in Literature | Examples and History

The Lost Generation | Expatriate Writers of the 20th Century