Vidhi holds a Masters in Education, B.A. in Spanish Literature from Rutgers University. Vidhi has experience working in academic affairs and staff management.

What Is Naturalist intelligence?

Naturalist intelligence is actually what it sounds like - it describes a person who is curious about living things and the planet. Some topics that might be interesting to the naturalistically intelligent person are plants, animals, weather, oceans, and mountains.

You don't have to be born with this type of intelligence; it can be developed later in life. We might call a person with naturalistic intelligence an 'outdoorsy' person. 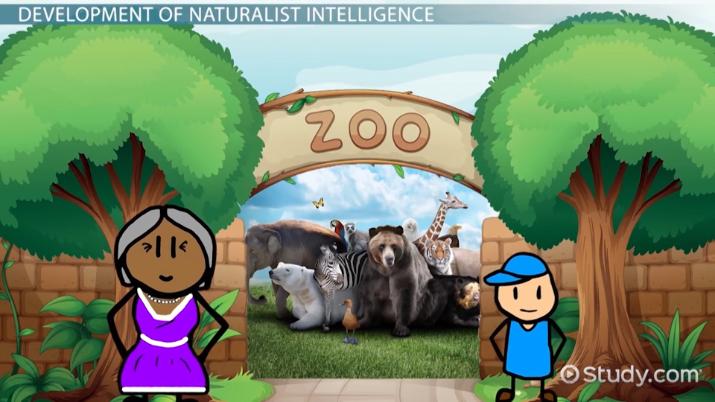 Naturalist intelligence can be developed in childhood or later in life. All it takes is an initial attraction to nature to pursue the interest further. Specific activities that may pique this interest are joining the Boy or Girl Scouts, camping or hiking trips, reading or watching National Geographic shows, and taking museum, park, or zoo trips.

As stated before, this can be developed later in life, as well. For example, if a boy named Johnny grows up in an urban area and later moves to a rural area, he might become exposed to fields, hiking, and mountains. If he loves it, he might continue to choose activities related to nature, thereby pursuing his natural intelligence.

Remember Charles Darwin, George Washington Carver, and Rachel Carson from history? They all had naturalist intelligence in their own special ways. Let's briefly review their interests.

Charles Darwin travelled through parts of South America and the Galapagos Islands, as well as other places. During his travels, he studied animals and their evolution. The reason we have his concepts of natural selection and survival of the fittest is due to his naturalist intelligence - he explored his interest and was able to contribute his findings to society.

Most people remember George Washington Carver as the inventor of peanut butter, but he did so much more! He researched the soil and came to the conclusion that planting peanuts and soybeans improved soil quality. Then, he figured out what to do with all that he planted, coming up with hundreds of uses, the most memorable being peanut butter. If Dr. Carver wasn't interested in soils and plants, we might have had to wait way longer for peanut butter!

Have you heard of the book Silent Spring or the EPA (Environmental Protection Agency)? Rachel Carson wrote that book about the damages that pesticides were causing to the environment. Silent Spring shed light on the EPA in the 1960s, and people started paying a lot more attention to the agency and products used on the environment. Thanks to Ms. Carson, certain harmful pesticides are not used anymore.

What If I Don't Have Naturalist intelligence?

Completing this lesson will help you meet these goals:

Using Multiple Intelligences in the Classroom