A nematode is a microscopic worm that has a very simple respiratory system and is located in nearly every soil on the planet. Study the definition of a nematode, the nematode respiratory system, the process of diffusion, and the cuticle. Updated: 11/27/2021
Create an account

Many people have never heard of nematodes. Yet they are the most numerous multicellular organisms on the planet. So what are nematodes? They are microscopic worms that inhabit almost every ecosystem on Earth. In fact, even a single scoop of soil contains thousands of nematodes.

Like many living things, nematodes breathe, or exchange gases with the atmosphere. However, unlike many living things, nematodes lack a formal respiratory system responsible for performing gas exchange. In mammals and reptiles, this system consists of trachea, lungs, and bronchial tubes. In the respiratory system of fish, the dominant feature is gills. Nematodes do not possess any of these organs. Instead, nematode respiration works in a much more simplistic manner. We'll examine this in the next section. 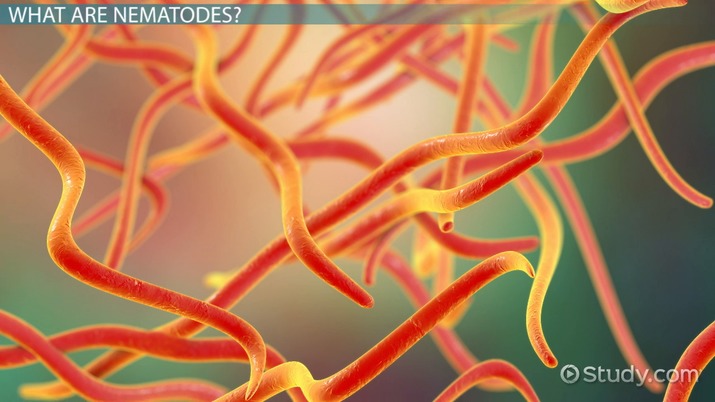 Try it now
Back
Coming up next: Phylum Nematoda: Classes, Characteristics & Examples

Now let's look at how this concept applies to nematode respiration. We're primarily concerned with two gases: oxygen, the primary gas animals inhale for use in respiration, and carbon dioxide, a waste product and the primary gas animals exhale. The nematode takes in and expels out these gases through their outlet layer called a cuticle, which is essentially like an extra layer of skin that is semi-permeable.

Nematode respiration is really quite simple. Because gases diffuse through the body cavity, there is no need for the trachea, lungs, and bronchial tubes found in a formal respiratory system. So while it may appear that nematodes lack a respiratory system, they do respire, but do so in a different and simplified manner.

Within every scoop of soil, in every ecosystem on Earth, there are thousands of microscopic worms called nematodes. This simple little organism lacks the respiratory system people commonly think of that is responsible for performing gas exchange. Nematodes rely on the principle of diffusion for performing gas exchange with the atmosphere. Diffusion occurs when molecules move from an area of higher concentration into an area of lower concentration. The two primary gases involved in respiration are oxygen and carbon dioxide. In a nematode, the high concentration of oxygen outside the body diffuses inward, while accumulated carbon dioxide (CO2) diffuses outward and into the lower concentration found in the atmosphere.

Nematodes Properties & Examples | What are Nematodes?