Neoclassicism and Romanticism are two movements that, though different, overlapped in the early 19th century. Follow the movement of the aesthetic pendulum, exploring the history behind the beginnings of Neoclassicism and the emergence of Romanticism. Updated: 01/11/2022
Create an account

For most of European history, we can look at people's tastes in fine arts as a pendulum. The basic ideas behind the art are the same, what we call the Western aesthetic, but every few decades the pendulum swings from one side of the fulcrum to the other. Arts go from austere, to highly decorative, to austere, and back and forth and back and forth. That's about 500 years of art history in a nutshell, so you're welcome for that.

One place where we see the pendulum swing pretty dramatically is in the early 19th century. On the one hand, there was the Neoclassicism movement, which was defined by calm rationality. On the other hand was Romanticism, which was dramatic and imaginative. It was a swing of the pendulum so extreme that it cracked the fulcrum, challenging some of the tenets of Western art itself. 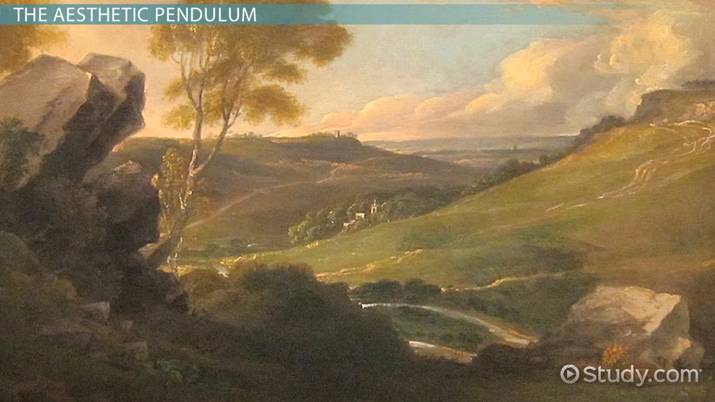 Try it now
Back
Coming up next: American Neoclassical Sculptors & Sculpture

Let's start by examining the movement of Neoclassicism. Neoclassicism itself was created by a swing in the pendulum, a rejection of the ornate and emotional forms of the Baroque and Rococo periods. Emerging in the 18th century and carrying into the 19th, Neoclassicism sought to return restrained, rational logic to European arts. It did this through the revival of the original source of the Western aesthetic: ancient Greek and Roman ideologies.

Neoclassicism emulated the mathematical harmonies, exact proportions, and collected aesthetic of the ancient world. The comparison is most obvious in architecture, leading to an abundance of buildings across Europe and the young United States which looked like Greek or Roman structures. However, the ideologies of this movement extended into painting, sculpture, and literature as well. Neoclassical arts were defined by clear and intentional lines, proportional harmony, and above all, a sense of rational logic.

Where did this style come from? It was a rejection of previous arts but was even more importantly, informed by a major philosophical movement of the time, the Enlightenment. Enlightenment thinkers challenged the traditions of European society, claiming that only that which could be empirically or rationally proven could be trusted. They based this idea largely on Greek philosophy, which held that individual rationale was the only pathway to absolute truth. In deference to the Classical philosophies they revived, Enlightenment thinkers celebrated the revival of Classical artistic ideals; hence the term Neoclassicism.

Neoclassicism had a huge impact on places like the United States. The Declaration of Independence is one of the clearest articulations of Enlightenment philosophy of all time, and the U.S.A. used Neoclassical arts to create a symbolic parallel between their republic and the Roman Republic. Even the U.S. Capitol was modeled on Roman temples.

Then the pendulum started to swing. Independence had been won, many countries in Europe had been reformed by the Enlightenment, and as the 19th century began, more artists started rejecting the Enlightenment's focus on unemotional logic and universal truths. Instead, they wanted to focus on individual emotion and imagination. This was the start of Romanticism.

Romanticism was an artistic and intellectual movement that flourished from about 1800-1850, give or take a few years on either end. It rejected Neoclassicism by creating artwork that was very emotional, dramatic, and personal. Brushstrokes became thicker and unrestrained, perfect symmetry was abandoned, and colors were contrasted in theatrical ways. In the Neoclassical movement, art often depicted historic themes, building a canon of examples for the ideal citizen to emulate. In the Romantic movement, the focus was on contemporary themes, largely those experienced by the artists personally.

Neoclassicism was fascinated with the power of individual rational logic as a pathway to absolute truth. Romantic artists shared this interest in the power of the human mind, but for them, it was not human logic that led to universal truth, but rather the human subconscious that led to personal truths. Romanticism was obsessed with the power, often the dark and terrifying power, of the subconscious, and explored that through poetry about insanity, paintings of nightmares, and drawings of gruesome memories that haunted the mind.

The Romantic fascination with the subconscious led to their ultimate philosophical goal: the hunt for the sublime. The sublime was an overpowering sense of awe and dread in the face of something absolutely and uncontrollably powerful. The sublime was terrifying in its scope, but magnificent to behold. It was a way to understand the subconscious and power of the human mind. Romantic artists looked to find it in Medieval and Gothic arts rather than Greek and Roman, in their dreams and fantasies, and in nature, which is why landscape painting flourished at this time.

In rejecting Neoclassicism, Romantic artists began to find themselves rejecting the foundations of Western art itself. They developed an Orientalist obsession with the exotic, looking to the Middle East and East Asia for inspiration. These themes were still portrayed in a very Western way, and it certainly cannot be said that Romanticism broke the Western aesthetic. However, in creating Romanticism, the pendulum had swung so hard that, for the first time, cracks were starting to show. By the end of the century, other European artists were consciously rejecting all Western presuppositions and looking to Japanese, African, and Polynesian art in the quest for true abstraction.

Let's review what we've learned. At the dawn of the 19th-century, two very different styles briefly overlapped. This was the end of the Neoclassicism, built on a revival of Greek and Roman ideals, rational, logical, and artistic/mathematical perfection. It was also the beginning of Romanticism, which rejected Neoclassicism for arts that were personal, emotional, and dramatic. Whereas Neoclassicism focused on universal truths, historical examples, and logic, Romanticism focused on the personal subconscious, contemporary events, and the sublime. Romanticism also looked for more inspiration outside of Western aesthetics. It was an exotic Orientalism that didn't really break from Western traditions, but opened the door to greater exploration of non-Western arts down the road. After Romanticism, the pendulum would swing again, but with every subsequent swing, more and more cracks were showing in European ideas about art.

Art of Romantic Era History, Artists & Paintings | What is Romanticism?

Art of Romantic Era History, Artists & Paintings | What is Romanticism?