Nested for loops in Java are loops that iterate inside a larger parent-loop. Examine the conventions surrounding nested loops while also learning the syntax required to utilize these useful tools. Updated: 12/28/2021
Create an account

A nested loop is really a loop-within-a-loop. This can be done at two levels, or three, or even more. But as we'll see in this lesson, increased nesting can cause issues and be very hard to maintain. Below, you'll see an example of how these nested loops can appear.

Think of a nested loop as a race track within a race track. When you begin each lap on the main oval, you veer into another track inside the original (the nested track or loop). You may go around any number of times within the smaller track before looping around the main one. Then it starts over again until you've done the required number of laps on the main track. In all, you may go around a thousand times, or many more!

In Java, nested for loops are usually declared with the help of counter variables, conventionally declared as i, j, k, and so on, for each nested loop. That is, the first loop uses i as the counter, while j is used for the second, and so on. This keeps track of how many times each for loop is run.

Let's look at this one more time. The j loop will actually run 15 times because i is set to stop at 5 runs. Each run would look like what you can see in this table.

This is a total of 15 laps through the inner track. 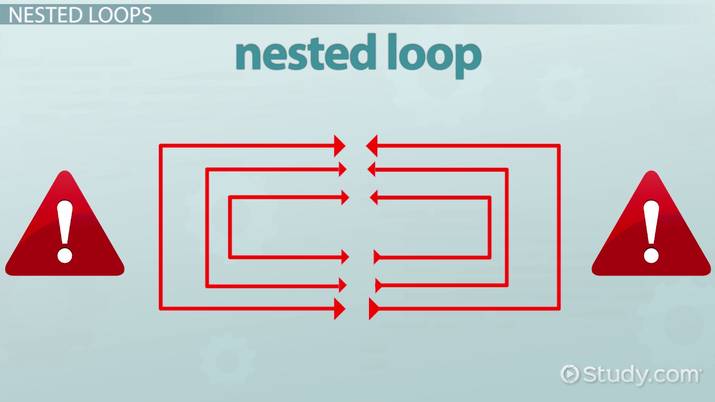 Try it now
Back
Coming up next: While Loops in Java: Example & Syntax

Let's take a look at how this will work in the Java language.

Let's first look at a simple example of 5 laps. This example has a main loop (race track) that will process until the counter reaches 5. However, within each lap around the track, it will step into the nested for loop (nested race track) and loop. The number of loops in the nested track will depend on what the lap count is. If we are on lap 3, we'll go around 3 times within the nested track.

Below is the code. Note that we'll print out the values of each counter.

Now let's look at another example. This time, focusing on cookies. In this example, we'll place chips on 100 cookies. There are 10 cookies sheets, each with 10 cookies on them (to make it simple). We have to start at sheet 1, run through all the cookies, then move to sheet 2. Instead of laps around a race track, we're making stops at each cookie sheet, which you can see play out with this code.

The output can be seen here. Only the first two are displayed for the sake of brevity.

Now let's take a look at an example involving looping through rows and columns. Another example is a loop through a table's rows and columns. In this example, let's move away from using i and j, so that the variable names make more sense for a table. The sample table has 24 rows and 24 columns. There are some special additions to this code for displaying the row number times the column, which creates an old-fashioned multiplication table, but the key syntax is the same for the loop.

The loop starts by starting on each row, then following across the columns. The nested loop is the one that displays the data for each column. At the end of the main loop, we're simply printing out a carriage return. When the previous code is run, the output looks like the image we saw a moment ago:

Even though it's certainly possible to have a nearly endless nesting of for loops, any looping past the third level can quickly become unmanageable. A common mistake in nested loops is mixing up the counters. For example, if you use i in the j loop or vice versa. Let's look at how that might easily happen in code:

It's actually a nasty little bug, but very easy to miss. Notice in the second loop that instead of stating j<10, the original counter i is used. This loop will actually run forever. The first loop is supposed to stop when i hits 20, but the second one also uses i as a limit, and so it will run and run and run. We let the code run over 200,000 times before stopping it, which you can see here:

As a rule, it's wise to check and double-check your code to make sure this simple oversight is caught and corrected.

Let's take a few moments to review some of the important information that we've learned. A nested for loop is a race track within a race track, a loop-within-a-loop. It's usually declared with the help of counter variables, conventionally declared as i, j, k, and so on for each nested loop. When a for loop is executed, the nested loop inside will also run and will run as many times as indicated in the code.

A nested loop, or loops, could run multiple times, given the parameters within it. An example of a nested loop is a routine that loops over a table's rows and columns. Any nesting beyond three levels is confusing and very difficult to implement. However, Java doesn't limit the number of nested loops and, as a matter of fact, a nested loop could run forever if, for example, the i variable is reused within the j loop declaration. However, a loop won't run if your code has errors in it, such as your j variable set to 1 but having a limit of less than 0.

While Loops in Java: Example & Syntax

Nested While Loops in Java

What is a Class in Java? - Definition & Examples

Static Block vs. Constructor in Java

How to Sort an Array in Java

What is 'Public Static Void Main' in Java?

Project Management for IT