Countries around the world rely on exports and imports to maintain stable economies. Learn about net exports, the benefits of strong capital flows, and the factors that influence trade balance. Updated: 08/14/2021
Create an account

It's hard to watch or listen to financial, economic, or political programs and not hear words like trade balance, capital flow, or net exports. Although these areas can become fairly complex at times, this lesson will help you breakdown and clarify these basic concepts.

Net exports is the value of a country's total exports minus the value of its total imports. To go a little further, it is the amount by which foreign spending on a home country's goods and services exceeds the home country's spending on foreign goods and services. For example, if foreign countries purchase $500 billion worth of U.S. goods and Americans buy $400 billion worth of foreign goods in a specific year, net exports would be positive by $100 billion. The income and economy of foreign countries, tariffs and quotas, the political environment, and exchange rates are just a few things that can influence net exports. 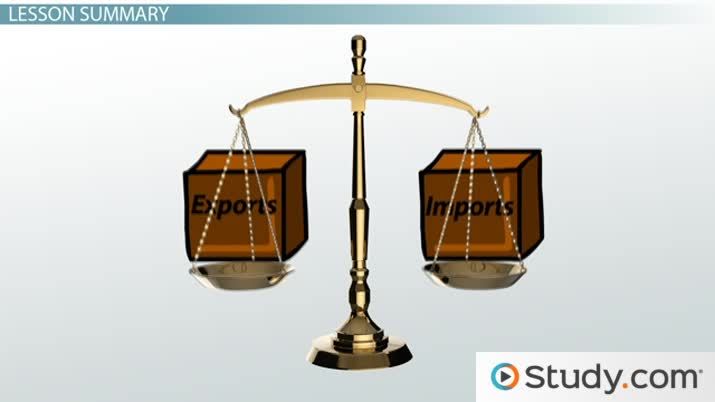 So, where do capital flows enter into the discussion with net exports and trade balance? At the most basic level, when someone imports a good or service, the buyer (or importer) gives the seller (or exporter) a monetary payment, just as we do when we go the store and purchase milk and bread. This payment is referred to as capital flows and represents money sent from overseas in order to pay for foreign goods and invest in markets. It is the movement of money among corporations and governments that go in and out of countries. The capital flow of a country can be either positive or negative based on their import and export levels, economic and political stability, and financial markets.

A positive capital flow balance implies that investments and money coming into a country from foreign countries exceeds the investments that are leaving that country for foreign sources. When inflows are greater than outflows, demand for more of the country's currency causes the currency to increase in value. This happens because foreign investors must change their currency into domestic currency when purchasing imports or investing in another country.

Strong capital flows into a country can result in many benefits. As firms and people invest new capital from outside countries, this can lead to new factories, research and development advances, and technology improvements. Ultimately, this results in more jobs, increased income, lower prices, and higher standards of living for citizens. One risk of too much capital inflow is that inflation could result if a country is already operating at full capacity and continues to receive strong foreign investment.

Now, let's look at trade balance and how it ties in and relates to capital flows and net exports.

Trade balance, also commonly called balance of trade, is the official measurement term used and synonymous with net exports. Trade balance is simply the value of goods and services exported out of a country minus the goods and services imported into a country: (exports - imports). This relationship between exports and imports can be both positive and negative. The trade balance is referred to as positive, favorable, or surplus when exports exceed imports. It is referred to as negative, unfavorable, or deficit when imports are greater than exports.

Whether a country has a trade surplus (favorable) or trade deficit (unfavorable) can be influenced by many things that make it easy or difficult to import or export to various countries. A few of them are the following:

Why does all this stuff matter? Net exports, or the balance of trade, is used to help economists understand the strength of a country's economy in relation to other countries. It can show how dependent or independent a country is on other countries.

Where does the confusion come from? It often arises from how people view the term deficit and surplus. Trade deficit is often thought of as a bad thing. However, whether a trade deficit is a good or bad thing is relative to the state of the economy.

When an economy is strong and expanding, countries like to import more than they export, providing price competition, which helps limit inflation. It also helps meet the supply needs of the strong economy. In a recession, countries like to export more, creating jobs, which will drive income of its citizens, and eventually demand for more goods and services.

Net exports is the value of a country's total exports minus the value of its total imports. The income and economy of foreign countries, tariffs and quotas, the political environment, and exchange rates are just a few things that can influence net exports.

Capital flows represent money sent from overseas in order to pay for foreign goods and invest in markets. It is made up of payments between importers and exporters. Strong capital flows into a country can lead to more jobs and better standards of living.

After reviewing this lesson, you'll have the ability to:

How Fiscal and Monetary Policies Affect the Exchange Rate

The Discount Rate & Monetary Policy: How Banks Can Borrow Money from the Federal Reserve

The Law of the Downward Sloping Demand Curve

What is an Expansionary Gap? - Identifying an Economy That is Above Potential