What Is Network Switching?

Network switching is the process of channeling data received from any number of input ports to another designated port that will transmit the data to its desired destination. The device through with the input data passes is called a switch. Data entering a port is referred to as ingress, while data leaving the port is referred to as egress. The switch represents the medium through which the data is routed to its final destination. There are different types of network switching. To better understand this let us examine the following illustration.

Let us image a room full of people. In two opposite corners of the room are two connected telephones. We identify four people in the room. Two use the telephone lines to speak to each other while the other two stand across the crowded room from each other projecting their voices amid the other voices in the crowded room. These sets of people are using two different types of switching. 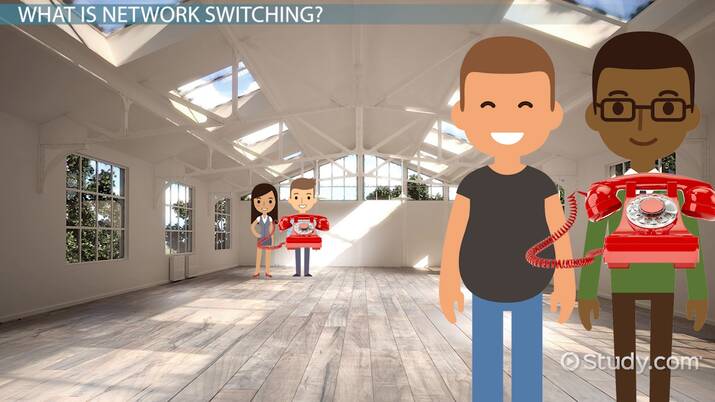 Coming up next: Ethernet Standards & Frames

Circuit switching is defined as the establishment of a dedicated communication path between the two parties, or nodes, within a physical network. This path (circuit) is established and maintained for the duration of the session. No matter the length of the communication session, the circuit will remain and the data paths maintained. The circuit is only terminated when the session ends. The session consists of three phases: circuit establishment, data transfer, and circuit termination/disconnect.

This type of network switching is well suited for voice communications and applications. In our illustration, the two people communicating on the telephone lines from across the room are using a dedicated communication path. Their voices (data) follow a dedicated path. Figure 1 illustrates circuit switching.

Packet switching is defined as the process of breaking down messages into small components, called packets. Switching information (source and destination) is then included in the header information of the packet. Each packet then independently navigates its way using the information, through the network to its destination. Because the messages transmitted are smaller packets, there is less demand for resources on intermediate network devices.

With this system of switching, line efficiency during transmission is increased and multiple applications can be easily multiplexed over a single channel with different streams of packets differentiated and prioritized. In this type of transmission, the packets from different applications share resources. When we think of our example in the beginning, the two people projecting their voices in the crowded room are sharing the air space to transmit their data with the rest of the crowd while the other two people over the telephone are on an exclusive line.

In the tradition layer 2.0 IP networking, when packets have to be routed to their destination, each routing device makes an independent decision on where the next network hop would be, to get that packet to its final destination, based on the information in the routing table. Every destination has more than one route leading to it. This means that, with normal IP routing, there are several possibilities when it comes to the route a packet will take to reach its destination as each routing device makes that independent decision on the next hop.

With multi-protocol label switching (MPLS), the ability for the intermediate routers to make these independent decisions are eliminated. MPLS is a network routing mechanism that directs packets to their final destination using an assigned label. The label depicts a predefined path determined by the first routing device, which the packet will use to get to its destination. This predefined path is known as a labeled switch path (LSP). The intermediate routers therefore read the next hop information predetermined on the label to make forwarding decisions that maintain the packets on the LSP. Once the destination is reached, the label is removed by the last or the corresponding exit router. The packet's identification then switches to its IP header. The difference is similar to when someone uses a map to get to a destination as to asking directions as he moves along towards his destination. The route will always be determined by the direction of the next person he inquires from.

Let's take a couple of moments to review the important information that we've learned. Network switching is the process of channeling data received from any number of input ports to another designated port that will transmit the data to its desired destination. Data entering a port is referred to as ingress, while data leaving the port is referred to as egress. We have examined circuit switching, which is the establishment of a dedicated communication path between the two parties or nodes within a physical network; packet switching, which is the process of breaking down messages into small components, called packets; and multi-protocol label switching, which is a network routing mechanism that directs packets to their final destination using an assigned label.