The economies of countries have often been classified into two groups: the industrialized nations with mature economies and high levels of development and the developing world - basically everyone else. But let's say your country is growing fast, and your quality of life keeps on improving. It is not as advanced as Norway yet, but suddenly, the label of developing country seems vague and even unfair.

Newly industrialized countries is an economic classification that can define this group of countries, which are still developing but are closer to achieving the goal. 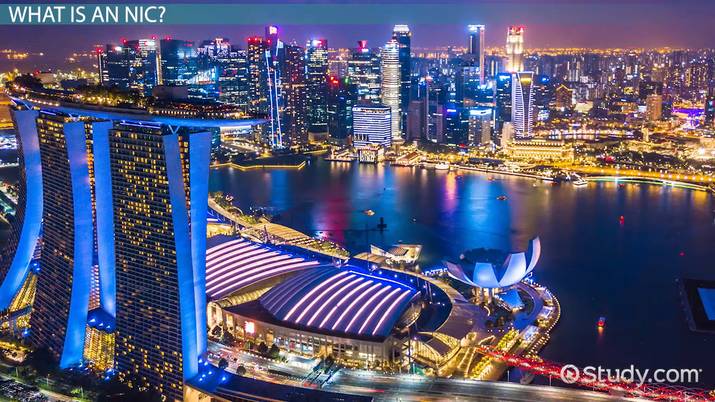 Try it now
Back
Coming up next: The Global Economy: Advantages, Expansion & Impact

What Is an NIC?

A newly industrialized country (or NIC) is a developing economy that has transitioned from being based on agriculture or extraction of raw materials, to being primarily based on the production of manufactured goods. These nations have taken important steps towards industrialization and might be considered as developed economies at some point in the near future. Sometimes, these economies are also referred to as emerging markets.

This categorization was first adopted in the second half of the 20th century, originally referring to Hong Kong, Taiwan, South Korea, and Singapore: four economies that were rapidly transforming and moving towards development thanks to high-tech manufacturing. Today, they are considered to have fully developed and are studied as the first generation of NICs.

There is not a total consensus on which nations are NICs, but most economists agree that there are nine at this point in time:

China and India represent particularly notable cases. Both nations are industrial giants, and their production surpasses many industrialized nations, but because of their large population, the average income and the overall social development remain low.

Each country and economy are unique. They all have singular characteristics, enjoy different opportunities, and face particular challenges. However, the newly industrialized economies often share common characteristics.

Let's take a closer look at these one at a time:

Over the years, these countries have kept a constant and significant economic growth, often at a fast pace. The per capita income (the average income of the population) is also increasing, although not necessarily at the same rate as the overall economy.

A big part of the population has gradually left the rural areas and relocated to the cities, looking for better job opportunities. Therefore, there is a large urban population and it is common to see cities growing to over 10 or even 20 million people, like Shanghai and Mumbai.

The vast majority of the population enjoys higher standards of living. As the economy grows, the inhabitants see improvements in infrastructure, healthcare, education, and many other areas. However, it is a long process, and it often takes years before the general population actually feels the advances.

The main economic activity is manufacturing; industrial production is oriented to exports. The profit obtained from exports is reinvested in the local economy, which results in domestic business and wages gradually growing. As more wealth becomes available, internal demand rises which encourages more industrial production. China produces all types of manufactured products, about 20% of the world's total; while Malaysia, Thailand, and the Philippines mostly make electronics. Turkey, Mexico, and Brazil export huge amounts of household goods and vehicles. South Africa relies mostly on mineral exports and industrial activities related to it.

Together, with industrial activities, the commerce and service sectors expand to satisfy the growing internal demand. In some cases, tourism is also seen as a strategic activity, to improve domestic consumption and attract income from foreign visitors.

The NICs still face challenges before economic growth can be transformed into social wellness that reaches most of the population. One of the biggest problems continues to be income disparity. Although the per capita income has been raised significantly, usually a small percentage of the population has become very wealthy, while most remain in poverty. Most of these nations are making efforts to develop a strong middle-class that will include the majority of the population.

Another common obstacle is corruption, which tends to slow social improvement. Also, market restrictions and limited civil rights represent a big risk to investors, so gradual reforms are needed to support the economic expansion.

Sustainability also needs attention. Some NICs have severe pollution problems and face major environmental issues. These nations must find a way to keep the economic growth rates, without causing major damage to the environment.

Finding economic resources is often a challenge, and building new infrastructure can be an expensive task. Investors are fundamental, especially direct foreign investment from international companies. Relative stability attracts investors from the developed nations, who open businesses in the country and participate in development projects.

Internal financing, coming from taxes, is another important source of funds. However, governments try not to put too much fiscal pressure on industries or exports, in order to remain an attractive destination for investors. Some governments take substantial loans to fund different projects. Finally, some receive foreign aid to make investments in infrastructure and social development. Transparency is key to success in getting financing. If the administration is corrupt, the country will end up in big debt, and unable to grow and remain competitive.

Let's take a few moments to review all of the important information that we've learned. Newly industrialized countries (or NICs), are developing economies that have advanced towards industrialization and might become developed, at some point, in the near future. China, India, Malaysia, Thailand, the Philippines, South Africa, Turkey, Brazil, and Mexico are commonly considered NICs. These countries have significant economic growth and a large urban population.

They're also experiencing gradual improvements in living standards. The main source of economic production is manufacturing, which surpasses agricultural work. The commerce, service, and tourism sectors are also expanding as the local demand grows. Income disparity, more solid institutions, and environmental issues are some of the challenges that NICs face. To finance development projects, it's important for NIC's to obtain foreign investment, taxes, loans, and foreign aid.

What is a Quota? | Purpose & Examples

What is Categorical Data? - Definition & Examples